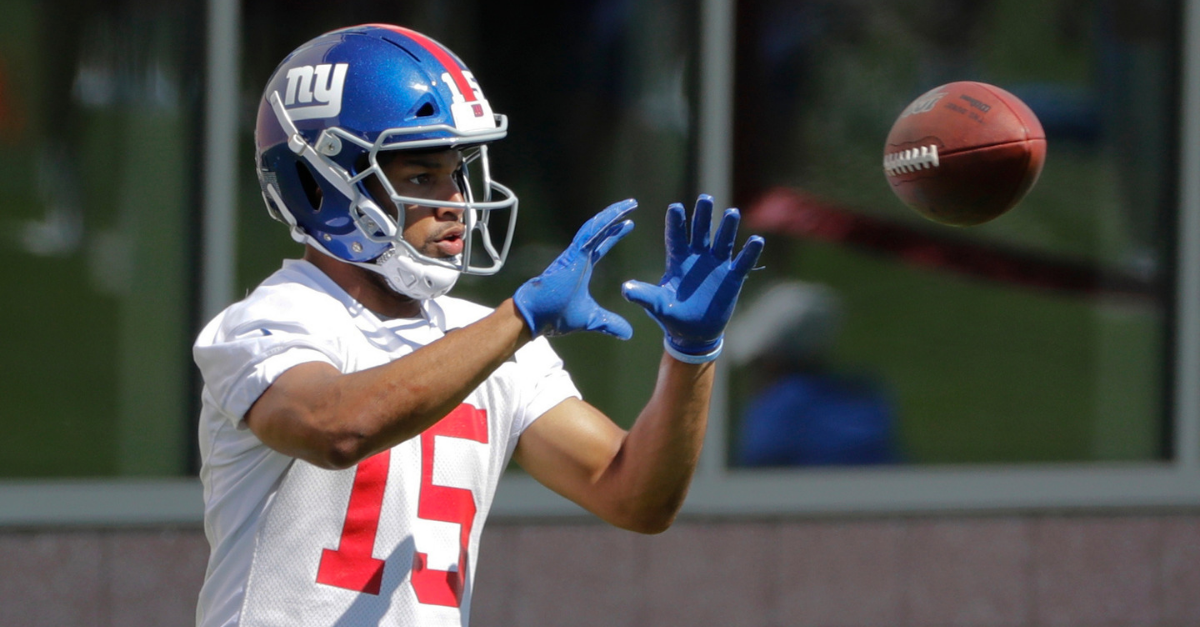 The 10-year veteran, who signed with the Giants in March as a free agent, announced the suspension in a Twitter post Saturday. He said he plans to appeal the violation of the NFL’s policy on performance enhancers and that he would have no further comment.

The NFL has not announced the suspension and it had no comment, league spokesman Brian McCarthy said in an email Saturday to The Associated Press.

Tate practiced Saturday and he can practice throughout training camp. He will not be able to play in the first four regular-season games unless his suspension is overturned. That rarely happens.

Tate, who signed a four-year, $37.5 million contract, including $23 million guaranteed, and general manager Dave Gettleman spoke to the media on Friday. Neither mentioned the suspension.

The Giants’ receiving corps has been swamped by injuries in the first three days of training camp.

Sterling Shepard, who was supposed to take over as the No. 1 receiver with the trade of Odell Beckham Jr. to Cleveland, broke his left thumb in the opening practice on Thursday. It was disclosed the following day that wideout and kickoff returner Corey Coleman tore an ACL in the same workout.

The Tate suspension is the latest blow.

In his statement, Tate said he and his wife met with a fertility specialist in April. He took a prescribed drug and learned shortly after an ingredient was a substance banned by the league. Tate said he reported the problem to the independent administrator of the NFL policy on performance-enhancing Substances, and alerted his coaches and general manager.

Tate is confident his appeal has merit. He said he has never violated the league’s rules on banned substances and the treatment will have no effect on the 2019 season.

Speaking to the media for the first time since breaking his thumb, Shepard believes he will be ready for the season opener at Dallas on Sept. 8. He said the thumb is not causing much pain. He hopes to start catching passes in a couple of weeks.

The Giants have three veterans who have been starters in Russell Shepard, Cody Latimer and Bennie Fowler, with the latter two playing on the Denver Broncos’ Super Bowl winning team in February 2016.

“We will be fine,” Sterling Shepard said. “Like I said, we have guys that will step up. This is the NFL, everybody can play and they will have an opportunity to showcase their abilities.”

Russell Shepard felt the receiving room might have be deepest on the team. He also knows social media are saying the injuries have left the Giants with nothing at the position.

“That’s how we like it, we have nothing to lose,” Russell Shepard said. “That’s what you want. You want people to doubt you so you can prove them wrong.”

There is some hope that Sterling Shepard could be ready for the start of the season, if all goes well. Or at least, he won’t miss much time https://t.co/BHjIAuTXIy

Tate split last season with the Lions and Eagles, catching 74 receptions for 795 yards and four touchdowns in 15 games. The Notre Dame product played with Seattle from 2010-13 and was with the Lions from 2014 until the trade to Philadelphia. His best seasons were from 2014-17, when he caught at least 90 passes per season with Detroit.

The last time the Giants’ receiving corps was hit by this many injuries was the fifth game of the 2017 season. Beckham, Brandon Marshall and Dwayne Harris were all lost for the season with injuries in the game, and Sterling Shepard was sidelined for two games with an ankle injury.