Well, NFL Football is Back, But It’s a Little Rusty 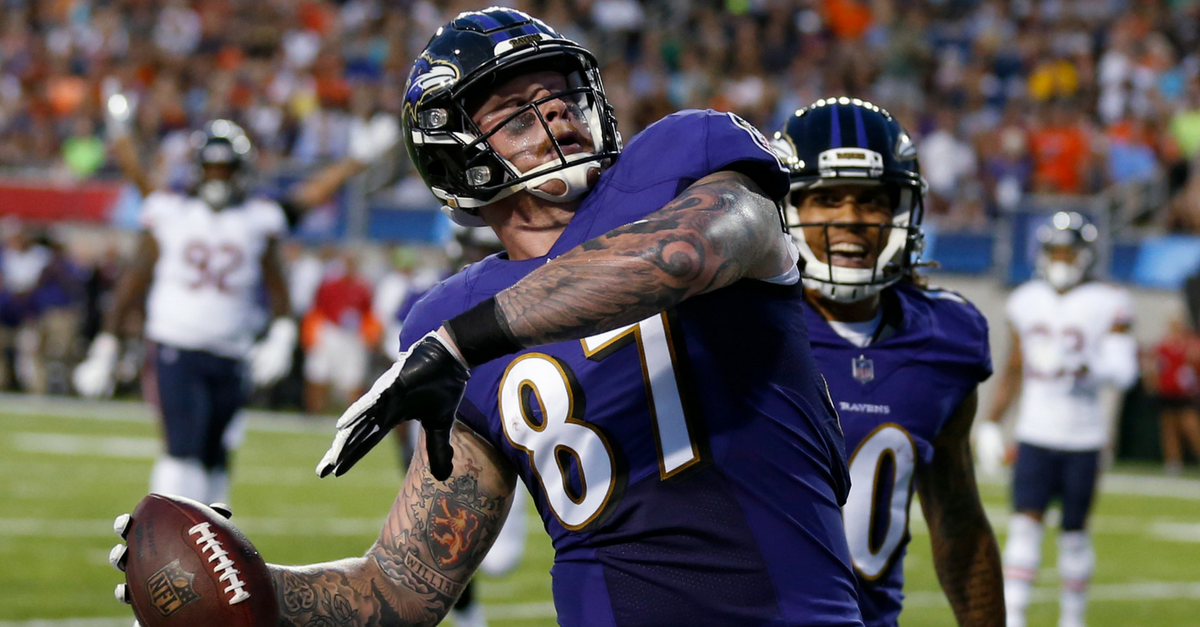 CANTON, Ohio (AP) ? The goals were to let the backups play and learn, and to be inspired.

The Ravens and Bears honored their great linebackers Ray Lewis and Brian Urlacher with some defense to make them proud in the Hall of Fame game that opened the NFL’s preseason Thursday night. Baltimore held on 17-16.

“Ray is the greatest linebacker of our time,” said 2016 Heisman Trophy winner Lamar Jackson, who quarterbacked the second half for the Ravens. “That was a big thrill and exciting stuff.”

Oh, there was a little spark of offense, some provided by Baltimore’s first-round draft pick. Jackson’s 7-yard touchdown pass to fellow first-rounder Hayden Hurst came after the Ravens’ defense recovered a fumble.

Chicago put together its best drive in the final minutes and journeyman Tyler Bray connected with Tanner Gentry for a 10-yard score to cap a 92-yard march. But the 2-point conversion pass fell incomplete.

Otherwise, D was the letter of the day: there were six turnovers in all, and 12 sacks, eight by the Bears.

“To represent Ray in this game to our guys meant even more,” Ravens coach John Harbaugh said.

“It was a special moment for our organization,” noted new Bears coach Matt Nagy.

The teams exchanged tipped interceptions on the first two possessions of the preseason.

Chicago moved swiftly downfield only to have Chase Daniel’s pass to Josh Bellamy deflected to safety Chuck Clark at the Baltimore 6. He returned it 15 yards, then the Ravens replicated the turnover.

Robert Griffin III, attempting a comeback after sitting out 2017, had his pinpoint throw go off the hands of receiver Breshad Perriman, then off rookie cornerback Michael Joseph. DeAndre Houston-Carson dived to make the pick at the Ravens 34.

“It felt great,” Griffin said. “I can’t tell you how grateful I am to play the game again.”

Then Lewis’ old unit gave him a thrill. On the next play from scrimmage, linebacker Kamalei Correa sped 19 yards with an interception to the Chicago 9. But Urlacher’s former defense made him smile, sacking Griffin on third down to hold Baltimore to a 31-yard field goal by Kaare Vedvik.

Generally, it was a sloppy affair among backups marred by a slew of dropped passes, poor protection for the quarterbacks, and misthrows by those QBs.

But something Lewis and Urlacher would approve, the defenses hit hard and tackled well.

Nagy, of late the offensive coordinator in Kansas City, made his head coaching debut with the Bears. He has said his new offense is in the early steps of development, and it looked that way all night.

Of course, with backups playing it’s nearly impossible to gauge progress. But he was optimistic.

“The arrow is pointing up for us,” he said. “We definitely took steps in the right direction.”

Each of the seven inductees to the hall who were on hand ? Terrell Owens is a well-publicized no-show ? received a rousing ovation when they were introduced before the game. Lewis replicated his patented warmup dance for a few seconds, and Urlacher slapped hand with every Bears player lined up on the 45-yard line.

“Ray was on the field getting all fired up, doing his thing,” Harbaugh said. “With both teams at the 45, I thought that was awesome, and then to see Ray come out, that was spectacular.”

Urlacher gave a pregame pep talk to the Bears in the locker room.

“It’s so funny to see,” veteran defensive lineman Akiem Hicks said. “Growing up, you’ve watched these guys, and you’re one of the guys now who people come up and ask for pictures and autographs. Then you see Urlacher come into the locker room and you get to see all these NFL football players turn into kids …

Also walking along midfield between the lines of Ravens and Bears were Randy Moss, Brian Dawkins, Jerry Kramer, Robert Brazile and Bobby Beathard.

Owens did make it onto the cover of the Hall of Fame enshrinement magazine, however.

At halftime, Hall of Famers Ozzie Newsome, the general manager of the Ravens, and Dan Fouts received their “Rings of Excellence” from David Baker, the hall’s president.

The first application of the NFL’s enhanced enforcement of penalties for players lowering their helmet to make a tackle occurred early. Ravens linebacker Patrick Onwuasor was flagged for his hit on Benny Cunningham, earning a 15-yard penalty that helped set up Chicago’s first touchdown.

It took less than 5 minutes of the first preseason game for the first helmet penalty to be called. Patrick Onwuasor is the culprit #RavensFlock

Correa got nailed for the same violation in the third quarter, but he also had a sack that forced a fumble in that period, and three sacks overall.

“It was great to see him break out,” Harbaugh said of Correa’s overall performance. “His work ethic and attention to detail, to see it pay off like that, a coach loves to see it.”