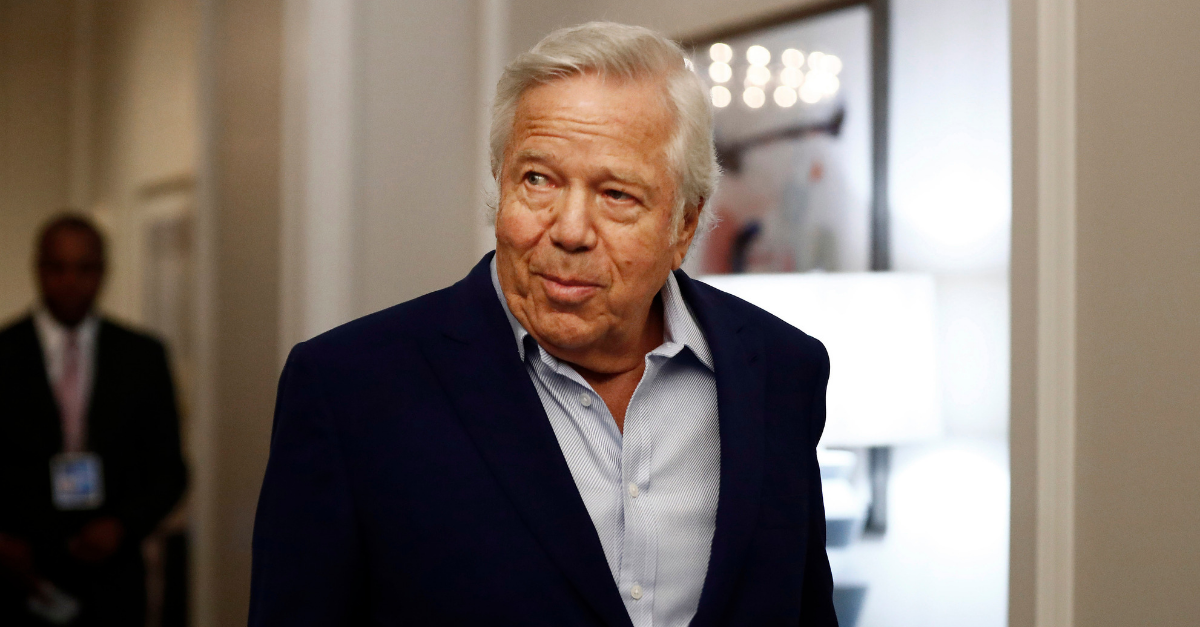 JERUSALEM (AP) — Israel is rolling out the red carpet for New England Patriots owner Robert Kraft, who arrives next week to collect the Genesis Prize, a prestigious award commonly known as the “Jewish Nobel Prize.”

The ceremony on June 20 would mark Kraft’s highest-profile public appearance since he was charged in February with soliciting a prostitute at a Florida massage parlor. He has pleaded innocent.

Kraft, a longtime supporter of Jewish and Israeli causes, can expect a warm welcome during a nearly weeklong visit.

In addition to collecting the $1 million award, he is scheduled to have lunch with Prime Minister Benjamin Netanyahu and deliver the keynote speech at a lavish ceremony hosted by comic Martin Short. Dozens of VIPs are expected at the invitation-only event, including leaders of Jewish organizations, top business and political figures and the prime minister.

Throughout the visit, he is expected to be accompanied by nearly 60 former and active NFL players. The delegation is scheduled to be welcomed at a reception at U.S. Ambassador David Friedman’s seaside residence north of Tel Aviv. Kraft is good friends with both Netanyahu and President Donald Trump.

Happy Birthday to #GenesisPrize2019 Laureate Robert Kraft. We are looking forward to honoring you at the Genesis Prize Award Ceremony on June 20 in Jerusalem! pic.twitter.com/VX7UNSRxMW

The Genesis Prize is granted each year to an individual in recognition of their commitment to Jewish values. Organizers say that Kraft has decided to donate his award to fight anti-Semitism, the Palestinian-led boycott movement against Israel, known as BDS, and what they say are attempts to delegitimize Israel.

“Robert Kraft’s visit to Israel next week represents a very important milestone in the fight against anti-Semitism, BDS and other efforts to delegitimize the state of Israel,” said Stan Polovets, chairman and co-founder of the Genesis Prize Foundation.

Last year’s winner, Natalie Portman, snubbed the event because she did not want to appear to be endorsing Netanyahu. The saga was troubling for the foundation, which says it works hard to prevent its philanthropy from being politicized.

The Genesis Prize ceremony has just been cancelled because Natalie Portman, who was awarded the prize, has decided that recent events in Israel make her "uncomfortable participating in any public events in Israel."

Kraft’s selection in January seemed like a safe choice, given his years of philanthropic activity and deep ties to Israel. But the following month, Florida authorities announced the misdemeanor solicitation charges as part of a widespread crackdown on sex trafficking.

The 78-year-old billionaire businessman has vigorously battled the charges, and the case against him appears to be crumbling. But he has largely kept a low profile throughout the ordeal.

He has appeared at a few sporting events in Boston, where hometown crowds have warmly cheered for him, and was spotted over the weekend at the French Open sitting with actor Woody Harrelson. He also has issued a written apology, expressing sorrow for hurting his family, friends and fans.

Kraft is the founder, chairman and CEO of the Kraft Group, the holding company of a diversified portfolio of businesses, which includes one of the largest privately-owned paper and packaging conglomerates in the world. He is best known, however, as owner of the six-time Super Bowl champion Patriots, one of the most successful franchises in American sports.

He is a well-known philanthropist in Israel, with deep connections to politicians across the political spectrum, and he has been a driving force in the growth of American football in Israel in recent years. He’s sponsored the sport since it was launched in 1999, and there are now more than 2,000 active players on more than 80 teams playing at various levels.

In 2017, he dedicated the Kraft Sports Complex in Jerusalem, which includes Israel’s first full-sized football field. At the time, he brought another group of professional football Hall of Fame players with him, including legendary players Joe Montana, Jim Brown, Roger Staubach and Mike Singletary.

Tom Brady and other Patriots stars have also visited over the years.

And here's Tom Brady and his owner posing with Israeli soldiers, providing tacit endorsement to Israel's occupation and apartheid. pic.twitter.com/2EWNRDvRYT

Kraft also owns the New England Revolution of Major League Soccer. Last month, the team hosted FC Chelsea at Gillette Stadium in May for a friendly match billed “The Final Whistle on Hate.”

The match was a way for Kraft and Chelsea owner Roman Abramovich, who is also Jewish, to raise awareness on anti-Semitism and support nonprofits that track and fight hate crimes.

The Genesis Prize was inaugurated in 2014 and is run in a partnership between the Israeli prime minister’s office, the private Genesis Prize Foundation and the chairman’s office of the Jewish Agency, a nonprofit group with close ties to the Israeli government. It is funded by a $100 million endowment established by the foundation.