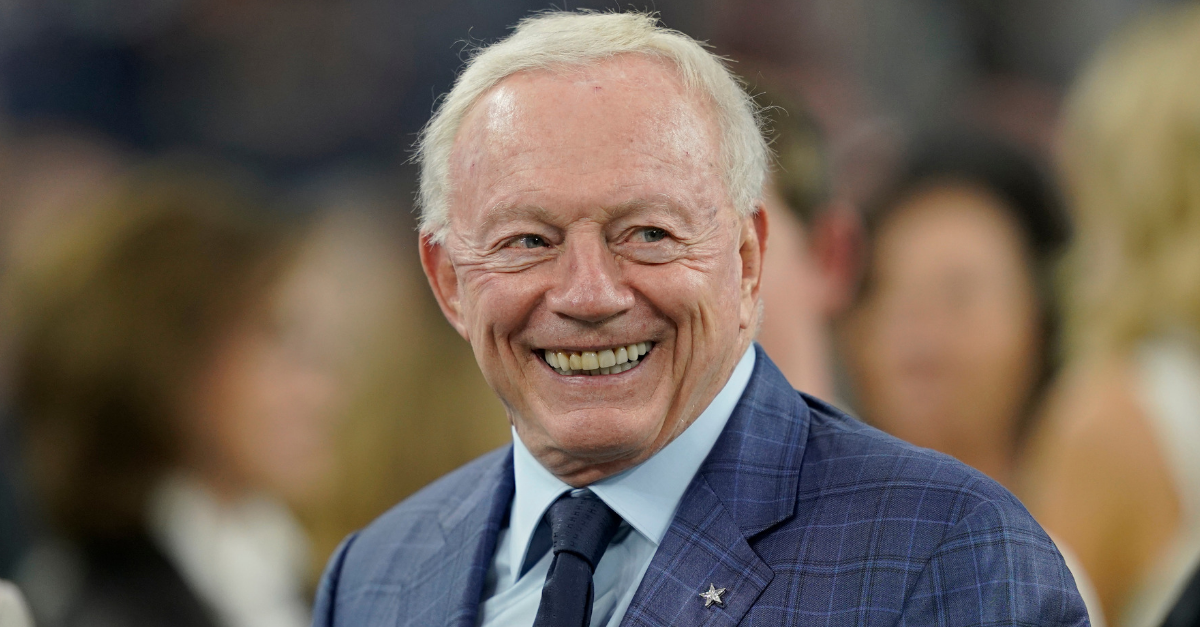 When you think of American sports team owners, who comes to mind? Is it Dallas Cowboys owner Jerry Jones and his ridiculous yacht? What about Dallas Mavericks owner Mark Cuban and all of the ludicrous fines he?s paid over the years? There is likely a lot people think about, but the most common thing of all is money.

To own a sports team these days, you have to have an insane net worth. In other words, something had to go incredibly right in life for it to happen. The end result has been the purchase of an incredible franchise and the best seats in the house.

According to Forbes? list, Reliance Industries CEO Mukesh Ambani is the world?s richest sports owner with a net worth of approximately $50 billion. He owns the famous cricket team, the Mumbai Indians. Other international owners include Chelsea FC, Roman Abramovich, Leicester City owner Aiyawatt Srivaddhanaprabha and his family, and Tottenham Hotspur owner Joe Lewis.

RELATED: Michael Jordan?s Net Worth Reminds Us That He?s Still the Greatest

Unfortunately, the deaths of Seattle Seahawks and Portland Trail Blazers owner Paul Allen as well Orlando Magic owner Richard DeVos and New Orleans Saints and New Orleans Pelicans owner Tom Benson in the past year means the list of American sports owners has to be restructured, and here is the list of the 15 richest people to own a professional team in the United States.

When Larry Baer issued a statement explaining part-owner Charles Johnson’s donation to Cindy Hyde-Smith, he noted, among other things, that the Giants are "the first team to devote a day to preventing domestic and family violence (Strike Out Violence Day)”https://t.co/8Yr6ySMn2z

Before his run as a successful businessman, Charles Johnson was an offensive guard at Yale College in the late 1950s. He soon found success at a young age at Franklin Resources, a company his father, Rupert Johnson Sr., founded. Although the 86-year-old lets his ownership group make the big decisions, he?s still the principal owner of the Giants and is the richest Major League Baseball owner today. Washington Nationals owner Ted Lerner is a close second in MLB and almost made the richest sports team owners list with an estimated net worth at $4.9 billion.

The 77-year-old billionaire from Brookline, Massachusetts is in the headlines for all of the wrong reasons these days, but make no mistake about it: Robert Kraft has built an NFL empire in Foxborough. The money keeps piling in with each and every Super Bowl victory under head coach Bill Belichick and quarterback Tom Brady, who also has an impressive net worth.

The founder of Quicken Loans, Dan Gilbert certainly made a big splash in the business world. He?s also seen a huge spike in notoriety for being the owner of the team which drafted the one and only LeBron James. Gilbert also owns the AHL?s Cleveland Monsters, the AFL?s Cleveland Gladiators and the Canton Charge, an NBA G League team.

Jaguars owner Shahid Khan is in talks to buy Wembley Stadium, with an eye toward potentially moving the Jags to London full-time one day, per @JamesOlley https://t.co/1BMJZ3hmya pic.twitter.com/wCqoERY7Xq

Born in Lahore, Pakistan, Khan moved to the United States when he was 16 years old and has lived the American dream ever since. He made his money in the auto parts industry, working at Flex-N-Gate Corporation when he was in college at Illinois before buying the company in 1980. In addition to the Jaguars, the also owner Fulham F.C. of the English Premier League and All Elite Wrestling (AEW).

When it comes to sports owners, nobody is more famous than Jerry Jones. However, he doesn?t have the deepest pocket book as a few of his peers. Much like Kraft, his main source of money comes from owning a team in the National Football League. Not to mention, Jones makes plenty of the team?s decisions each and every year, too.

Before he became of the 10 youngest billionaires in the world, Pera bought the Grizzlies from Michael Heisley in 2012. The founder of he global communications technology company Ubiquiti Networks, Inc. has seen his net worth skyrocket. He?s only 41, too.

In February 2008, after making global real estate development firm The Related Companies a massive success, Ross bought the 50 percent of the Dolphins and Dolphins Stadium for $550 million. Well, let?s just say it?s worth a lot more than that and he now owns 95 percent of the franchise and Hard Rock Stadium.

When you have so much money in the bank, why own one professional franchise when you can own one from pretty much every sport the country has to offer? That?s exactly what Stan Kroenke has done. He also owns the NLL?s Colorado Avalanche and Arsenal of the English Premier League. The only thing missing is a baseball team. And since the NFL doesn?t allow an NFL owner to own other teams, his wife, Ann Walton Kroenke ? the daughter of Walmart co-founder James ?Bud? Walton ? has the Nuggets and Avalanche under her name.

For nearly 35 years, Arison was the chairman of the world?s largest cruise operator, Carnival Corporation. Now, the 69-year-old from Tel-Aviv, Israel spends his days as the owner of the Miami Heat. Since he bought the team in 1995, Arison has captured three championship rings with superstar players like Dwyane Wade, LeBron James and Shaquille O?Neal.

A self-made billionaire from Russia, the 6-foot-9 Prokhorov has teased the potential sale of his NBA team, but he is still the owner and lives in Moscow while his investment career still makes him a ton of money each and every year.

When he was just 21 years old, Anschutz bought Circle A Drilling from his father and the rest is history. From the stock market to railroads to energy companies to real estate to sports to entertainment, the now 79-year-old has his hands and money into plenty of things. If you know the name AEG, that?s his, and it?s helped make him a lot of money over the years.

The richest owner in the NFL is pretty new to the job. The 61-year-old hedge fund guru and founder of Appaloosa Management bought the Panthers in 2018. He also paid the highest price in NFL history with a price tag of $2.2 billion, which is less than 30 percent of what he?s worth.

A SAP SE co-founder, Plattner loves golf and owns a handful of courses, including Fancourt Golf Estate and CordeValle Golf Club in California. The 75-year-old from Berlin, Germany must also love hockey because he owns the National Hockey League?s San Jose Sharks. Not a bad way to spend your retirement, to say the least.

According to Forbes, Red Bull sold 6.8 billion cans last year. And when you are the co-founder and have 49 percent of the energy drink company?s shares, you can own and name your own teams. That?s exactly what the Austrian billionaire has done. It doesn?t get much sweeter than that, despite not having a team in one of the four major sports.

After the NBA forced owner Donald Sterling to sell the team, Ballmer came in hot with a $2 billion bid. The 63-year-old and former Microsoft CEO has been one of the amazing and energetic fans at the Staples Center ever since. He almost needs a camera on him at all times, he?s that entertaining. And when you have that much in your bank account, you can sit as close and yell as loud as you want.