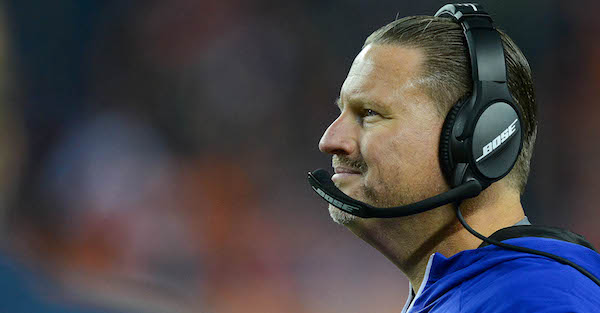 Before the start of the season, the New York Giants were considered to be a playoff contender after last year’s 11-5 season. But the Giants have stumbled to an abysmal 1-7 start, and now there are questions surrounding the job security of second-year coach Ben McAdoo.

However, according to ESPN’s Dan Graziano, the Giants aren’t planning on making a coaching change regardless of how bad the season gets for the franchise this season.

According to a source, the New York Giants do not plan to make any decisions on changes to the coaching staff or… https://t.co/sQScPk1yNl

Related: After yet another loss, head coach refuses to rule out benching two-time Super Bowl champion

The Giants haven’t fired a coach during the season since John McVay in 1978.

Regardless, the blowout 51-17 loss to the Los Angeles Rams led to more questions and complaints about McAdoo, and some have speculated that he has lost the team.

Players and coaches are trying to figure out who has been leaking things to the press about McAdoo overworking players. Defensive backs Janoris Jenkins and Dominique Rodgers-Cromartie have been suspended by McAdoo for violating team rules, which has added fuel to the fire regarding whether the players aren’t responding to the coach.

While the Giants are favored against the San Francisco 49ers this Sunday, they won’t be projected to win many more games this year. McAdoo was the offensive coordinator with the team under Tom Coughlin before becoming head coach, so it will be intriguing to see whether the franchise shows patience with him and gives him a third season.