After yet another loss, head coach refuses to rule out benching two-time Super Bowl champion 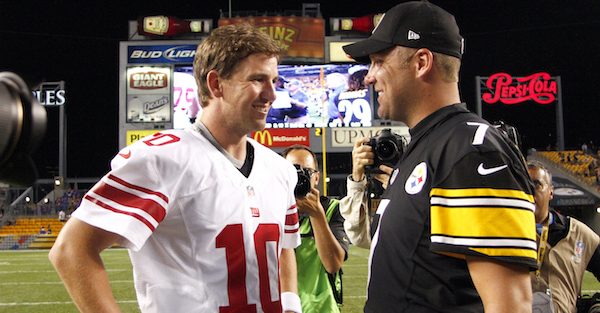 On a day where Eli Manning became only the seventh quarterback in NFL history to reach 50,000 passing yards, Giants coach Ben McAdoo admitted there’s a chance Manning could be benched for rookie Davis Webb at some point this season.

Related: NFL starter’s neck was immobilized as he was carted off the field

Manning’s numbers haven’t necessarily been bad this season — he’s thrown for over 1,800 yards, 12 touchdowns and six interceptions — but the Giants fell to 1-7 after a 51-17 loss to the Los Angeles Rams, and the season is a lost cause.

Ralph Vacchiano of SNY tweeted that McAdoo left the door open for 2017 third round pick Davis Webb to start at some point this season.

Ben McAdoo just opened the door for the Giants possibly switching to QB Davis Webb in the second half of the season.

Woah Ben McAdoo on if making changes includes the quarterback "That includes everybody." #DavisWebb

Manning has started every game in the last 13 seasons, and he’s been as durable and dependable as any quarterback in the league. But the Giants did invest a relatively high pick on Webb, and they want to see if he can play.

Manning is 36, and it’s unclear how many more years he has left. The Giants have been plagued by injuries this season, so it’s unfair to pin the season’s struggles on Manning. But benching Manning might not sit well with a fan base that is already disappointed by the first half of this season.