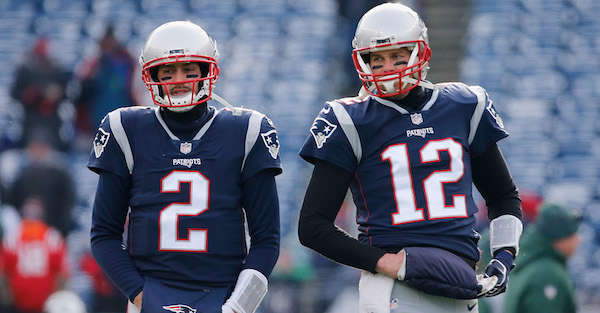 Tom Brady’s status for Sunday’s AFC Championship Game is up in the air after the 40-year-old reportedly injured his hand during practice this week.

Tom Brady jammed his throwing hand at practice after accidentally being run into, according to a source. X-rays showed no structural damage.

And so three days before the AFC Championship game, Tom Brady did not practice due to his hand injury.

If Brady can’t go on Sunday against the Jacksonville Jaguars, backup quarterback Brian Hoyer would take over as starter. Hoyer, who was signed by the Patriots after they traded Jimmy Garoppolo to the San Francisco 49ers, told reporters he’s ready to go if he needs to take over for Brady.

“I prepare every week like I?m going to play,” Hoyer said according to NESN. “Whether I do or don?t, that?s not really up to me. I think the one thing that I can benefit from is since I was here as the backup last time, I?ve played a lot of football. I?ve been the starter on three different teams. I know how to prepare as a starter. And whether I?m getting those reps or not, each rep that I?m not getting, I?m taking as a mental rep.

“I?m always preparing to play, because the truth of reality is, you never know when you?re name?s going to be called. So I think if anything, having been a backup, having been a starter, now being in the backup role (again), I know how to prepare like I?m going to play. And if I don?t play, then that?s good for our team. If I do, then I?m ready to go.”

Hoyer has only been with the team since the beginning of November, but he’s familiar with the Patriots’ system. This is his second stint with team after he was Brady’s backup from 2009 to 2011.

Since then, he’s played for several teams, including the Cleveland Browns, Chicago Bears, Houston Texans and most recently the San Francisco 49ers.

If Brady can’t play or is limited, Bill Belichick probably wishes he hadn’t traded Garoppolo or even Jacoby Brissett. Brady will likely play, but it’s worth asking how effective he will be if his throwing hand is injured.