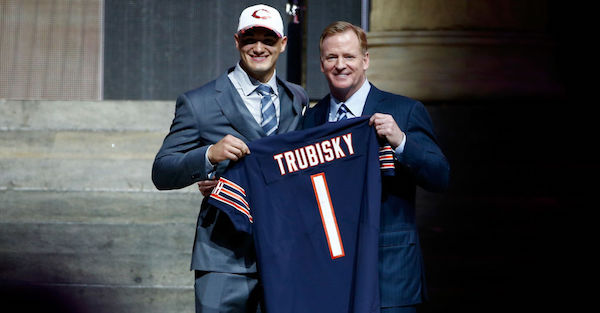 Jeff Zelevansky/Getty Images
PHILADELPHIA, PA - APRIL 27: (L-R) Mitchell Trubisky of North Carolina poses with Commissioner of the National Football League Roger Goodell after being picked #2 overall by the Chicago Bears (from 49ers) during the first round of the 2017 NFL Draft at the Philadelphia Museum of Art on April 27, 2017 in Philadelphia, Pennsylvania. (Photo by Jeff Zelevansky/Getty Images)

Over the summer, the Chicago Bears made a stunning investment in free agent quarterback Mike Glennon. While it was not a shock to see a team go after Glennon in something of a stop-gap role, the Bears seemingly bid against themselves in order to add the former Tampa Bay Buccaneers quarterback to the depth chart and, at the time, that produced a presumption that Glennon would serve as the team’s starter.

Then, though, the Bears also selected former UNC quarterback Mitch Trubisky with the No. 2 overall pick in the NFL Draft and that certainly added fuel to the fire when it came to who would take the first snap in Week 1. Now, we have final confirmation and the starter, at least for the opener, will be Glennon.

John Fox says the #Bears haven’t decided who their backup quarterback is yet. Glennon is the starter.

As noted above, it has not been announced that Trubisky will be Chicago’s primary backup for the season opener against the defending NFC champion Atlanta Falcons. Still, the bigger story is that Glennon won the team’s quarterback competition, holding off what we would have to assume was a hard charge from the talented rookie.

This isn’t the end of the quarterback discussion surrounding the Bears given the nature of the sizable investment in Trubisky. Still, Chicago’s starter is Mike Glennon and there will be plenty of intrigue as to how he will perform in the role.