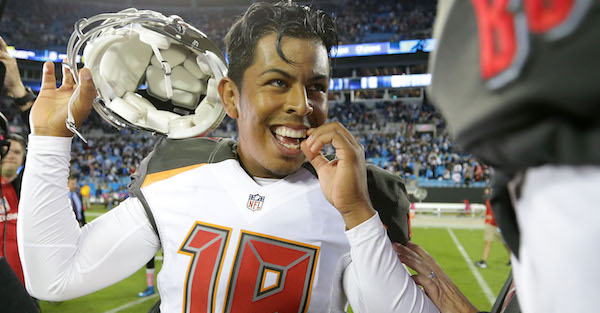 When the Tampa Bay Buccaneers came up on the clock ? for the second time ? in the second round of the 2016 NFL Draft, it seemed there were a few different directions in which they could go.

After having snagged Vernon Hargreaves III in the first round and defensive end Noah Spence with the No. 39 overall pick, there was a feeling Tampa Bay would address the offensive side of the ball with its next pick.

Maybe a wide receiver to pair with Mike Evans. Maybe a tight end or an offensive lineman for depth. However, they made a bit of a shocking move when they opted for Florida State kicker Roberto Aguayo with the No. 59 overall pick.

Fast forward to present day, and Aguayo has since been cut after a disastrous rookie season in which he hit 22-of-31 field goals and missed two extra points.

On Sunday, after having ditched what Trey Wingo labeled as the “worst draft pick in NFL history,” the Bucs opted to sign kicker Zach Hocker to replace Aguayo on the roster as announced by the team:

Hocker, a seventh-round pick by the Washington Redskins in the 2014 NFL Draft out of Arkansas, has also had brief stints with the Miami Dolphins, New Orleans Saints, the Los Angeles (then St. Louis) Rams, and the Cincinnati Bengals.