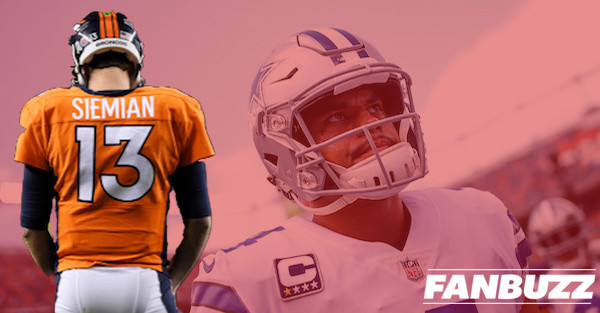 The thought all along would be if the Dallas Cowboys missed Ezekiel Elliott for any amount of time, specifically the six games he may or may not be suspended for, Dak Prescott would be able to stand in and lead America’s Team to victory.

That theory took a massive hit Sunday afternoon, when Prescott completed 30 for 50 passes for 238 yards, two touchdowns and two interceptions, and the Cowboys were blown out, 42-17.

An overview of Prescott’s performance is horrifying for any Dallas fan. The narrow perspective might be even worse.

Elliott’s nine-carry, eight-yard performance was horrendous, and it shows just how much the Cowboys need him to get the run game moving. Even Hall of Famers such as LaDainian Tomlinson are questioning his effort, saying he “quit” on his team.

For Prescott, it looks very much like the Vince Young effect. When the Tennessee Titans relied on Chris Johnson to carry the load and Young to find holes in the defense after setting the pace with the run game, the Titans struggled to beat defenses with eight men in the box.

Prescott is a much better pocket passer than Young was, but the defensive scheme has proven to be difficult for the Cowboys to beat, at least thus far.

Elliott’s miserable performance wasn’t an excuse for Prescott’s afternoon, who was apparently blamed for not making plays.

For the Denver Broncos, it’s an entirely different look. The hole in Denver’s team was thought to be at the quarterback position. The Broncos have an elite defense, two outstanding wide receivers and an unproven quarterback.

Trevor Siemian worked his way past Paxton Lynch for the second consecutive year to take over the starting job.

In Year 2, he’s already grown leaps and bounds. He’s thrown for more than 200 yards in consecutive games, with six touchdowns. He’s done as much through the air in two weeks this year as he did in four weeks last season.

Siemian and Co. picked apart the Cowboys and he made big-time throws to help lift the Cowboys.

“He’s smart, and he’s super-accurate with the football,” Broncos cornerback Aqib Talib said, per ESPN. “He has the poise of an eight- or nine-year veteran. Trev could be a star in this league. If we do what we need to do on defense, Trev is going to be a star this year.”

For the Cowboys, Prescott needs to answer  the bell. For the Broncos, they may just be developing the quarterback needed to take Denver to the next level.