Since Monday Night's horrifying scenes in Cincinnati, NFL fans can breathe a sigh of relief, as doctors at the University of Cincinnati Medical Center provided an update on NFL player Damar Hamlin. As the Bills players began to practice on Thursday morning, the first time since their game with the Cincinnati Bengals was suspended, a press conference was held to give everyone an update on Hamlin's condition.

UC Health physicians Dr. Timothy Pritts, alongside Dr. William Knight, described "substantial improvement in the last 24 hours," noting that while Hamlin remains in critical condition, the signs of improvement they have seen from the 24-year-old are far better than they could have hoped for.

Citing the immediate response from the Bills medical personnel and their recognition of potential commotio cordis and cardiac arrest, the UC Medical team credited Hamlin's remarkable improvement to the on-field response. Nearly halfway through the first quarter of the Bills-Bengals game on ESPN, Hamlin's injury stopped the game, as his teammates showed their fear and despair while Hamlin was taken to the ICU. 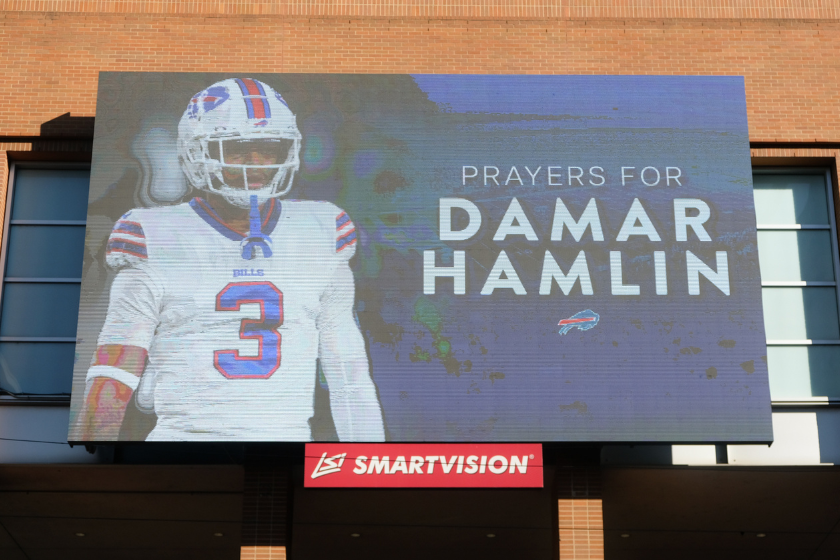 Jordon Rooney, Hamlin's marketing representative, has been giving updates over the last few days as has Hamlin's uncle, Dorrian Glenn, Hamlin's father, Hamlin's mother, and the rest of Hamlin's family.

Dr. Timothy Pritts also noted that when Damar Hamlin woke up, he was able to follow commands and even asked who won the game via writing. Pritts clarified that Hamlin is unable to communicate verbally due to the breathing tube he still relies on, but could communicate in writing. The doctor's response to question of who won the game? "Yes, you've won. You've won the game of life."

Hamlin's health has been at the forefront of everyone's mind since Monday Night's game, following the scary moment that came after Buffalo Bills safety Damar Hamlin collided with Bengals wide receiver Tee Higgins. The medical emergency continued on the field as Monday Night Football cameras rolled. After the suspension of the game was announced, Bengals fans made their way to the Intensive Care Unit, setting up a makeshift memorial site for those who wanted to pray for Hamlin.

Other fans not in the Ohio-area have helped in other ways, mainly donating to the GoFundMe page for Hamlin's toy drive. Since the scary moment, fans of the Pittsburgh Steelers, Baltimore Ravens, New England Patriots, and other teams across the AFC and NFC have donated more than $6 million to the page.

Doctors also noted that they would like to see steady progress from Damar in the next few days, as they work towards liberating him from his breathing tube. But now we know, as the Bills continue their quest to bring a Super Bowl to Upstate New York, Hamlin will be awake and able to watch his teammates march through the playoffs. And while the regular season may not have gone the way the former Pitt cornerback has hoped, his prospects are far brighter than they were on Tuesday night.

MORE: Damar Hamlin's Mom Has Always Been By His Side, From Pee-Wee Days to Tragedy