Throughout football's history, there were countless times a quarterback has spiked the ball to stop the clock. But the most famous instance of this play was the time a quarterback didn't actually spike it, resulting in a game-winning touchdown.

In 1994, the Miami Dolphins were playing the New York Jets at Giants Stadium when future NFL Hall of Fame quarterback Dan Marino ran the legendary "Clock Play" to secure an iconic comeback win.

The Dolphins entered the day as the leader in the AFC East with all three teams close behind including the Jets trailing by one game. Don Shula was in his second to last season as Miami's head coach while current Seahawks head coach Pete Carroll was in his only season leading the Jets.

After back-to-back losses, Miami and All-Pro quarterback Dan Marino needed a win against their division rivals. But the game began with New York and Boomer Esiason jumping out to a 17-0 lead. Marino eventually broke the shutout in the second half with a 10-yard touchdown pass to wide receiver Mark Ingram. Esiason answered with a touchdown pass of his own, hitting Johnny Mitchell for the second time in the game.

Esiason would eventually throw an interception with New York leading 24-14. The Dolphins then marched down the field and Marino hit Ingram down the middle of the field for a 28-yard touchdown pass.

With just under three minutes to go in the game, Boomer was intercepted once again, giving Miami a chance to complete the double-digit comeback.

Marino led the Dolphins down the field to the seven-yard line with 38 seconds remaining in the game. Traditionally, a team spikes the ball here to stop the clock. But brilliantly, Marino and the Miami offense approached the line of scrimmage like they would be spiking the ball, but surprised the Jets' defense when he didn't throw the ball to the ground.

Does it get any better than the Fake Spike game from Dan Marino?pic.twitter.com/AIzPuSqgaK

In one of the most famous clock plays in NFL history, Marino dropped back and hit Ingram along the right sideline as he stepped into the end zone in front of cornerback Aaron Glenn for his fourth touchdown catch of the game with 22 seconds left.

Marino finished that drive 7-for-8 for 84 yards and the game-winning touchdown.

An interesting fact to note is the fact Miami still had a timeout when they faked the spike. It actually wasn't necessary to spike the ball at that moment, though it would save the timeout if they chose to eventually kick a field goal to tie the game. The person who actually pushed Marino to use the fake was backup quarterback Bernie Kosar, who had used the play when starting for the Cleveland Browns and famously also won a college football national championship at Miami.

Importance of the Win 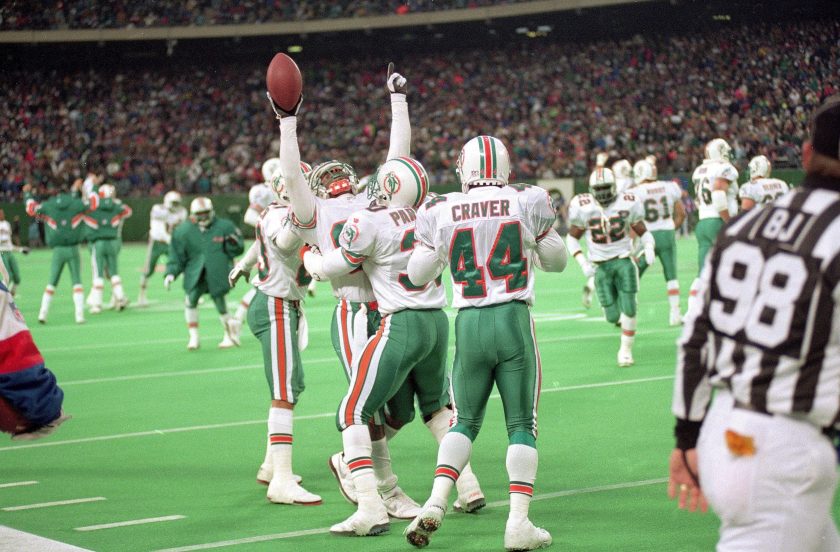 With how close the AFC East was in the standings, every win proved to matter. At the end of the regular season, the Dolphins ended as the division champions, tied at 10-6 with the New England Patriots, but won the tie breaker. If Miami had lost the "Clock Play" game against New York, they would have finished behind the Patriots, been a Wild Card team and played on the road in the first round of the playoffs.

Even though they eventually lost to the San Diego Chargers in the Divisional Round and come up short of the Super Bowl, they likely wouldn't have reached that point if not for the fake spike.

The Chargers went on to get destroyed by the San Francisco 49ers in the Super Bowl, an iconic team led by Steve Young, Jerry Rice, and Deion Sanders.

The following year was Don Shula's last with Miami, leading to Jimmy Johnson's return as head coach of the Dolphins, a position he would hold for four seasons.

Legends like the Packers' Aaron Rodgers and Steelers' Ben Roethlisberger famously used Marino's Clock Play to their advantage later on, but it was Miami's gunslinger who perfected it and made NFL history.

This article was originally published on January 21, 2020.