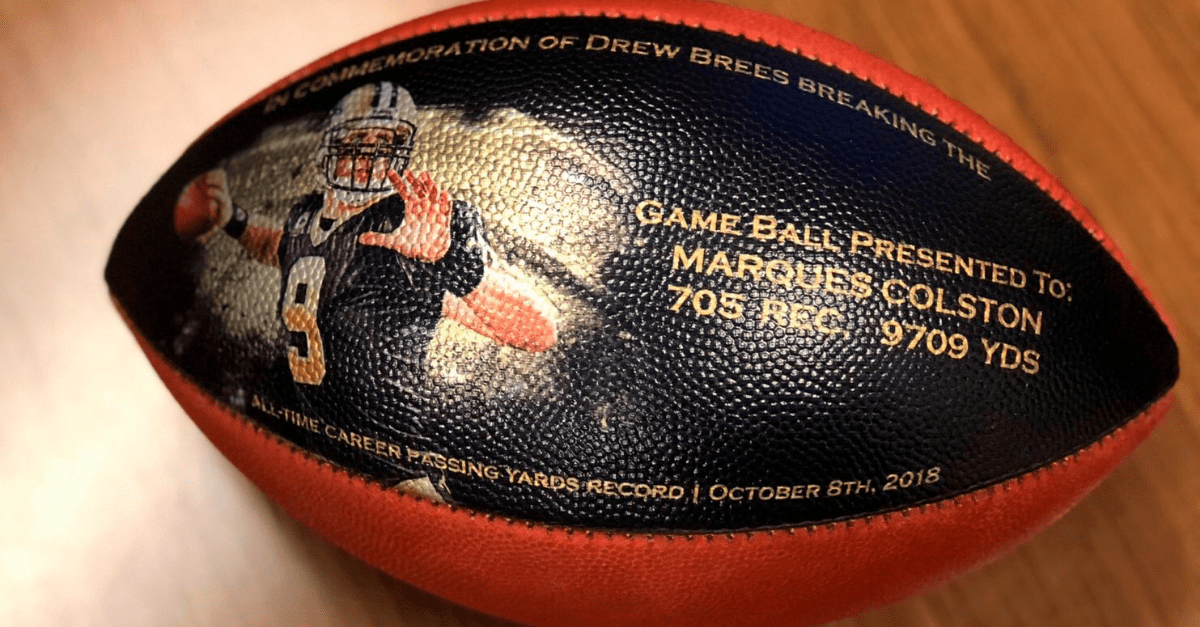 METAIRIE, La. (AP) ? When Drew Brees became the NFL’s career leader in yards passing, he wanted to come up with some sort of gift to thank those who coached him, caught the 6,357 completions it took to set the record and blocked while he threw.

His solution was an exhaustive process than involved the production of about 175 unique commemorative footballs and the enlisting Saints front office and public relations staff to help track down 99 receivers, 56 offensive linemen, 11 head or assistant coaches from his 18 pro seasons as well as others instrumental in his success.

They began receiving their custom-made footballs this week, which pleased Brees because he wanted it done before Christmas.

“Naturally you start thinking, ‘OK, well, a lot of people have caught those balls,” Brees said. “So let’s get a list of all the pass catchers and the number of catches and the number of yards and let’s put together a game ball for them and put those statistics on there for them, so they know that they have a piece of this and they were an important part of it.'”

That’s how the effort started. But Brees soon realized he couldn’t just limit it to receivers.

“It’s not just about the receivers. It’s about the guys blocking.’ So it’s like, ‘All right, let’s find every offensive lineman that’s ever started a game.’ So we did that,” Brees said. “Then I started thinking about coaches. Then I started thinking about other people as well. So it was actually a long list. But I just wanted to do that for them.”

Even current Saints players, such as veteran tight end Ben Watson, received the balls at their homes ? not the mail room or locker room at Saints headquarters.

“It’s him. It’s surprising but it’s not surprising at the same time that he would give a special thanks to the guys that helped him along the way,” Watson said. “Obviously, this is his accomplishment. But him being the leader that he is, he loves to defer praise to other people.”

Watson said he was “Just thankful to be able to play with him and be able to contribute to the greatness that he’s achieved.”

Smith said Brees’ gesture “shows what kind of guy he is, and you want to be around somebody like that, who shows appreciation.”

The package with ball included a typed letter signed by Brees. Receivers, linemen, coaches and other “contributors” each got different variations of the letter, depending on the nature of their roles in the record.

The balls sent to retired players included the number of passes they caught from Brees and the total yardage of those catches. For example, the ball sent to Saints career receiving leader Marques Colston specifically recognized his 705 receptions for 9,709 yards.

For current players, Brees didn’t include such stats, which grown since Manning’s old mark was eclipsed in October.

Brees said he was gratified by text messages he’d received. Brandin Cooks sent him a video from the locker room at the headquarters of the former Saints receiver’s current team, the Los Angeles Rams.

Former Chargers fullback Fred McCrary sent a video of himself holding his ball in a barber shop, boisterously bragging that he’s “famous today.”