A four-headed monster. A behemoth. I'm talking about the Eagles running attack and the damage it very well could do to your fantasy teams.

With only one sure-fire leader in the backfield (who also doubles as quarterback) there is really no hope for your fantasy team on this Eagles rushing attack, yet there is hope for many, many yards gained and touchdowns had. 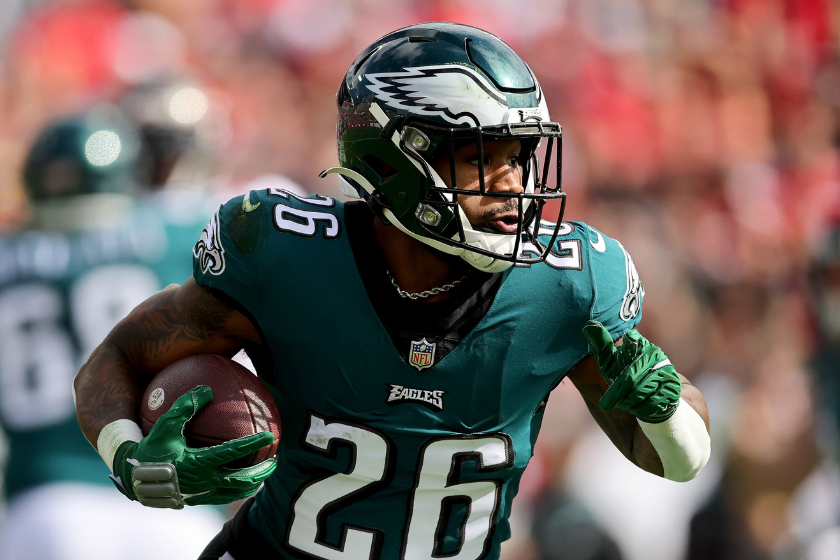 The Eagles addition of Trey Sermon was supposed to solidify a goal-line power back option, but he wasn't active for the Eagles first game of the 2022 NFL Season. The Eagles' active rushers (Jalen Hurts, Miles Sanders, Kenneth Gainwell, and Boston Scott) scored four rushing touchdowns on Week 1 from distances of one, one, two and one yard respectively.

This bodes well for an established rushing attack, but poorly for anyone who's wishing for fantasy points from someone in the Eagles RB room. Miles Sanders, the lead back in the last year of his rookie contract, was good for 96 yards on 13 carries (7.4 YPC) and seemed to finally heed his blockers and not get too "LeSean McCoy" about it. He's great as a possible flex starter for a fantasy team because he may be able to find the end zone close to 10 times this season, but as a number one running back, he is complimented by the smaller, shiftier Scott (a Sproles-like weapon) and Gainwell, who combined for nine carries and two touchdowns.

Now, to the most important weapon of the NFC East: Jalen Hurts. Hurts scrambled and carried the ball 17 times for 90 yards. It comes with the territory of having a mobile quarterback, but he is the head of this monster. The Eagles run more sweeps than a dust-buster and head coach Nick Sirianni can't seem to stay away from running sideline to sideline. There is very little room for a hard-nose rusher as the offense is running now. I think I've made this point clear, but your fantasy team can take a hike. If the Eagles' ground game is as successful as it was last year, it will mean that having any of these guys (save for Hurts) is a liability.

The Philly Infantry Gets Support from the Air 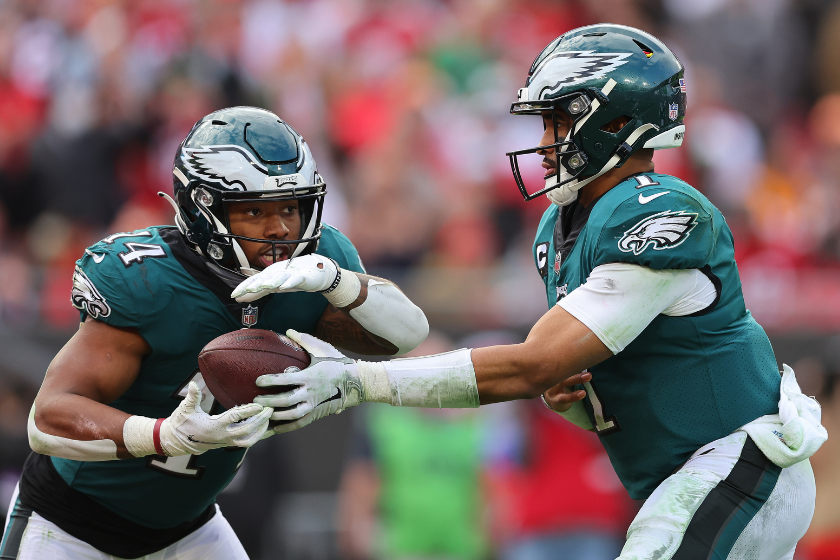 This being said, the target share for the receiving core was quite AJ Brown-heavy. As the year goes on, expect that to find more equilibrium and for Hurts to spread the love (DeVonta Smith had 916 yards last season and ZERO yards on four targets at Detroit). Dallas Goedert also had four targets, reeling in three passes for 60 yards. But, numbers aside, the vibe of the day was about establishing the Eagles' shiny new toy (the $100 Million Dollar Man, AJ Brown) who ate for 155 yards on 10 catches.

So, it is imperative for any of you fantasy football juggernauts -- you "fans" who get validation by screaming selfishly at your televisions for coaches to run the ball so you can impress your work friends -- to forgo the Eagles in the fantasy column and back them in the win column. This offense and its weapon usage is unpredictable. Who's to say Sanders gets 15+ rush attempts at all this season. Though he can turn two in to 10 on any run, he is so far from a sure thing for point value. I am excited to see all of the tweets of anyone who has the flavor-of-the-week Eagle who banks multiple rushing touchdowns in a week (Gainwell and Scott both get goal-line looks and I can't even explain why...).

The fantasy is to play meaningful football in late January, so ditch your dreams of winning your league with any Birds in the backfield.