Here’s why Colin Kaepernick decided to kneel, not sit, during the national anthem 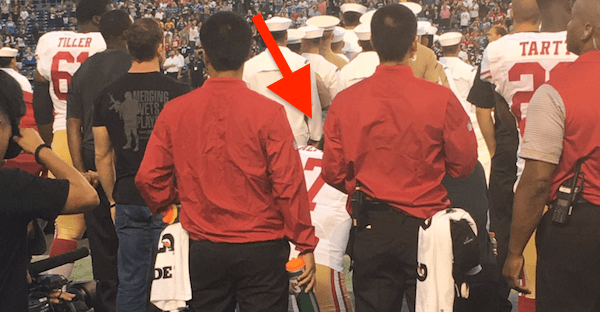 After Boyer, a former Army green beret, wrote an open letter to Kaepernick earlier in the week, the quarterback invited Boyer to attend the game, where the two talked for 90 minutes prior to the contest, per ESPN. That’s when a decision was made for Kaepernick to support the veterans on the San Diego Chargers “Salute to the Military” night.

“We were talking to him about how can we get the message back on track and not take away from the military, not take away from pride in our country but keep the focus on what the issues really are,” Kaepernick said. “As we talked about it, we came up with taking a knee because there are issues that still need to be addressed and there was also a way to show more respect for the men and women that fight for this country.”

After the game, Kaepernick maintained his love for America, noted he’s not “anti-American” and pledged to donate $1 million to communities in need in an effort to battle racial inequality.

Kaepernick?s response after his decision to sit drew criticism was swift:

The NFL replied to the controversy with a statement, saying ??Players are encouraged but not required to stand during the playing of the National Anthem.?

Other high-profile athletes like LeBron James and Carmelo Anthony have spoken out against what they perceive as racial and social injustice. Following the police shooting deaths of Alton Sterling and Philando Castile in July, which were captured on video resulting in nationwide protests and demonstrations, Anthony reached out to fellow athletes on social media, urging them to ?step up and take charge? of the political environment. As has NBA star Dwayne Wade, whose cousin was fatally shot by a stray bullet Friday as she pushed a baby stroller near a school on Chicago?s South Side.