Jalen Hurts has been on the national football radar since he was a four-star signal caller for Texas' Channelview High School.

He introduced himself to the college football world as the Alabama Crimson Tide's first true freshman starting quarterback in over 30 years and held the job until the second half of the 2017 National Championship Game, when Tua Tagovailoa usurped him.

Hurts then took his talents to Norman, Oklahoma, to play for head coach Lincoln Riley and the Oklahoma Sooners. He proved he was still one of the best quarterbacks in all the land by carving up Big 12 defenses enough to be named a Heisman Trophy finalist in 2019.

Naturally, the dual-threat QB's next step was the NFL. His rebound season at Oklahoma was all the Philadelphia Eagles needed to see to draft him in the second round of the 2020 NFL Draft. He sat behind Carson Wentz until Wentz played poor enough to give Hurts a shot at commanding the offense full time. He started the final four games of the season and proved himself as a passer and runner despite the Eagles going 1-3.

Now, however, Hurts is in MVP form and has the birds looking like they can win a Super Bowl.

That's a record-breaking brief of the Philly QB's football bio. But what about the man off the field? What about his personal life? His love life?

Like anyone who's ever slung the rock in Texas, Jalen comes from a football-loving family.

The American football player was born Jalen Alexander Hurts to Pamela Hurts and Averion Hurts. He has one older brother, also named Averion, and a younger sister named Kynnedy Hurts. Jalen's dad was his football coach in high school.

Nick Saban, Lincoln Riley and his own dad.@JalenHurts has been surrounded by great coaches his whole life. ? (via @BuckyBrooks + @MoveTheSticks) pic.twitter.com/xwUj3EPShX

Averion Jr. played QB at Texas Southern University and is a high school football coach in the Houston area like his dad.

Who is Jalen Hurts' Girlfriend? 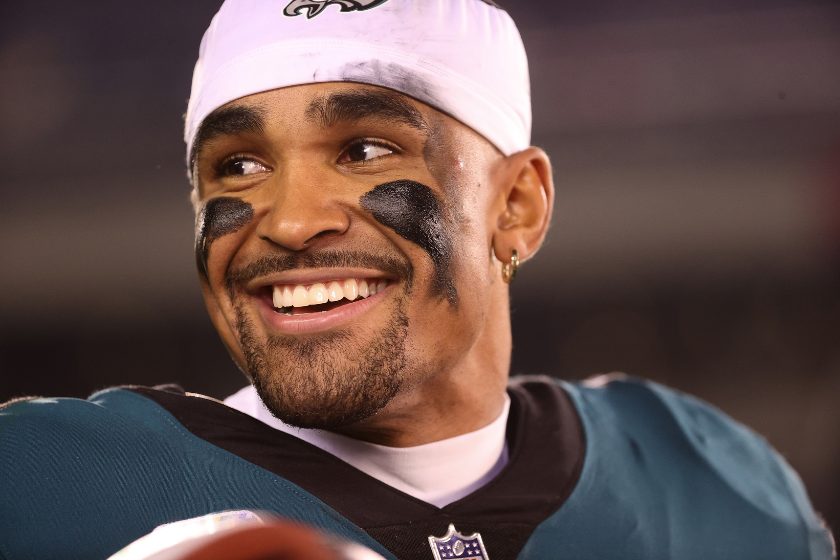 RELATED: Joe Burrow's Girlfriend Olivia Has Been His No. 1 Fan Since College

Hurts keeps his private life on the down low. He doesn't post much other than football-related content on social media, so it's not easy to know who he's been dating, if anyone.

However, when the 2016 SEC Offensive Player of the Year wasn't throwing touchdowns against Texas A&M and Clemson at Alabama, he was spending his time with his girlfriend Bry Burrows.

"No words to describe the humble reminder of Honors Day at #UA. Knowing I have been recognized is priceless." -Bry Rivera Burrows #TodayAtUA pic.twitter.com/0ZnXjieOix

.@MandersonUA MBA student Bryonna Burrows, our next #WomenofCulverhouse feature, is a passionate advocate for advancing student life on campus and continues to lead by serving as vice president of the MBA Association and captain of the national award-winning MBA Case Team. pic.twitter.com/hWrZg2GukM

Burrows was very plugged in at the University of Alabama, taking part in various student organizations and earning two bachelor of arts degrees in Spanish and political science. She went on to earn her master's degree in business administration immediately after graduation.

The couple's relationship ended when Hurts transferred to Oklahoma to finish his college career. As for Burrows, she reportedly works for IBM in the Dallas area.

So, Jalen Hurts is single, but he's balling on the field. He can find a new a girlfriend in the offseason.