Jalen Hurts' meteoric rise to NFL stardom has put the Philadelphia Eagles on the map. The undefeated NFC East leaders wouldn't be where they are without the former Oklahoma Sooners and Alabama Crimson Tide quarterback at the helm of the offense.

His unlikely path from the college ranks to one of the best quarterbacks in the NFL -- despite being a second-round pick in the 2020 NFL Draft -- is nothing short of remarkable. Ups and downs are part of life, but if you're riding the Jalen Hurts rollercoaster, you probably need a minute to catch your breath. At every turn, Hurts' talent was questioned, and yet, he kept on winning. Fans turned tail and ran and critics voiced concerns over and over and over.

Despite all that, the family in Hurts' corner never wavered.

Jalen Hurts' Parents Have Supported Him Since Day 1 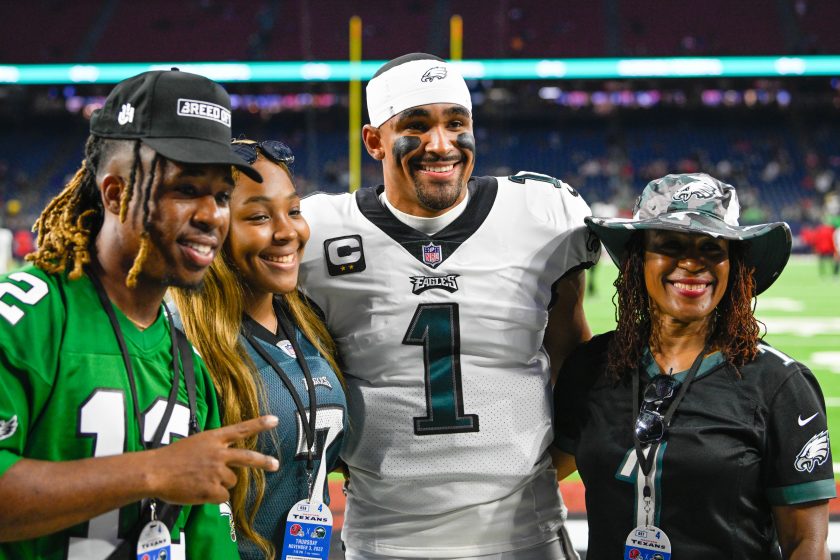 When we knew him as Alabama quarterback Jalen Hurts, the Channelview, Texas native seemed untouchable. His first action came against the USC Trojans in 2016, when Hurts finished the game 6-of-11 for 118 passing yards and two touchdowns passes, plus 32 rushing yards and two more scores in the season opener. The next week, Hurts became the first true freshman to start at quarterback in Nick Saban's coaching career.

Hurts won SEC Offensive Player of the Year, was a Freshman All-American, and never looked back. Flash forward to the 2018 College Football Playoff National Championship. Facing the nation's sixth-ranked defense in the Georgia Bulldogs, Alabama trailed 13-0 at halftime. In an unprecedented gamble, Saban plugged highly-touted freshman Tua Tagovailoa in as the team's starting quarterback for the second half.

Prior to that, Hurts accounted for 2,935 yards of total offense, 25 total touchdowns and threw just one interception on the season. It wasn't enough for a kid who was 26-2 as Alabama's starter. Tagovailoa's toss to win that title game ascended him over Hurts the following season, and a comeback performance by Hurts to win the 2018 SEC Championship Game was the last glimpse Alabama Crimson Tide fans would get.

Hurts took over the Oklahoma Sooners as a graduate transfer, going off in his senior season for 5,149 total yards, 32 touchdown passes, 20 rushing touchdowns and a second-place finish in the Heisman Trophy voting behind LSU's Joe Burrow.

Being a coach's son fields its own set of challenges, but for Hurts, playing for his father Averion Hurts, who is the head coach of Channelview High School outside Houston, bred a stone-cold winner. Between his junior and senior years leading the Falcons, Hurts accounted for 8,425 total yards and 91 total touchdowns, winning Texas District 21-6A MVP honors both seasons.

Suffice to say, his dad's tutelage made the U.S. Army All-American one of the most-coveted players in the nation. Averion's guidance stuck with his son, even though he believed Jalen was "miscast in the Alabama offense." Hours after winning that national championship game at Alabama, Hurts' focus was on being benched. He recalled crying in his parents' hotel room along with older brother Averion -- he played quarterback at Texas Southern -- and sister Kynnedy. Hurts said he looked up at his dad and asked, "What are we going to do now?"

Averion looked back at his son and said, "We are going to fight." Dad wasn't the only one speaking out to defend his son.

As a quarterback battle hovered over 'Bama football ahead of the 2018 season, Jalen's mother Pamela Hurts backed up her son. Hurts received backlash for speaking to the media at the University of Alabama's Fan Day that year, suggesting a lack of communication from the coaching staff about his role and feelings ahead of, ultimately, losing his starting job.

Jalen's mom took to Facebook to defend his comments:

"When has Jalen ever spoken to media about anything other than the team? When has he ever whined, pouted or talk about what "y'all" don't know takes place behind the scenes? There's a reason why players aren't allowed to speak to the media. Jalen spoke his truth, finally, after 3 years of being compliant and controlled. You have no idea what is and has been going on-- and most likely, never will."

Once again, people were doubting Jalen Hurts ahead of the 2020 NFL Draft. Some believed he should change positions, while others didn't think he could translate to the NFL as a passer. But knowing all he's been through, there wasn't a single shred of doubt that Jalen was ready for the next challenge.

"Keep your circle small," Hurts said, recalling his dad's advice prior to the Peach Bowl his freshman season. "The bigger you get, the smaller your circle should be."

It's in Jalen Hurts' DNA, and his parents reminded him of that at every turn from Houston to Tuscaloosa to Norman and now Philadelphia.