These were landmark games, but for me, none were as incredible as the 2018 College Football Playoff National Championship Game between the Alabama Crimson Tide and Georgia Bulldogs, and one moment will resonate forever.

While Kendrick Lamar's halftime performance captivated fans, a monumental decision took place inside the Alabama football locker room. Trailing Georgia 13-0, head coach Nick Saban made the boldest decision you'll ever see in a championship game. He benched starting quarterback Jalen Hurts, who was the 2016 SEC Player of the Year and boasted a 26-2 record as the Tide's leader, for an untested true freshman quarterback. 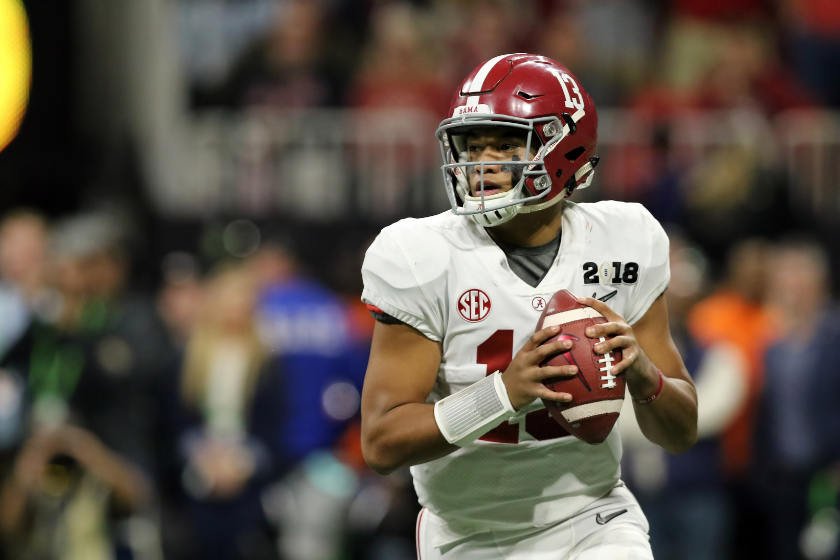 Tagovailoa led 'Bama on a seven-play, 56-yard touchdown drive in the third quarter, which Georgia quarterback Jake Fromm responded to by connecting with Mecole Hardman for an 80-yard touchdown. After 13-straight points for the Crimson Tide, the game was tied at 20 in Atlanta.

For the first time in 16 years, the national championship game headed to overtime.

A 51-yard field goal by UGA's Rodrigo Blankenship opened the scoring. It was Alabama's turn, and the stakes were simple -- No points, and the Tide were headed back to Tuscaloosa. A field goal extended the game. A touchdown, however, would win it.

After a sack on first down, Tagovailoa took the 2nd-and-26 snap, saw freshman wide receiver DeVonta Smith running free down the sideline, and launched a 41-yard touchdown pass to win the game.

Alabama fans from all over the country shared their memories of this iconic moment in Crimson Tide history with FanBuzz. The memories of that day inside Mercedes-Benz Stadium will live with them forever.

"I was thinking, holy crap. We don't have a good enough field goal kicker for this. Next thought -- OMG that's a TD, we won! We won! We won! Absolutely awesome." -- Elizabeth from Chelsea, AL

"I was a nervous wreck standing up for probably the last hour of the game... I was pretty sick that night so I was in my house by myself while most were at watch parties. My mom was at work texting me what was going on and she was in the break room watching. She got up to throw something away when Tua got sacked, and 2nd and 26 happened when she had her back turned and missed it. So while I was on the phone with my friend, my phone is simultaneously buzzing like crazy because she was texting me that she had left the room seconds before the throw. I was a student at UA at the time so the next morning, every teacher and student was in the best of moods." -- Mike from Tuscaloosa, AL

"I was pacing my living room and as soon as I saw that it was a completed pass I started holding my breath praying that there wouldn't be a flag for some stupid penalty to bring it back. Once I realized it was going to stand, I started dancing around the room like a fool. ROLL TIDE ROLL BABY." -- Suzanne from Oxford, AL

"I was working in Odessa, TX watching in my hotel room. I was on the phone with my best friend Leanne for the entire second half. I was thinking we were about to lose, then BAM! We won! Awesome memory! I just didn't have anyone to celebrate with after..." -- Sheryl from Gulf Shores, AL

"My wife and kids don't care about football. I was the only one still awake and I just remember jumping up and down and doing what can only be described as "whisper yelling." I stayed up for at least another hour watching the play and only occasionally crying. It was such a thing of beauty." -- Travis from Memphis, TN

There were 26 starters from both teams selected in the NFL Draft, with several others who had yet to turn pro. Georgia's Andrew Thomas, J.R. Reed and Jake Fromm, who were underclassman at the time, are now on NFL rosters. Alabama's Terrell Lewis and Jalen Hurts -- who blossomed into a Heisman Trophy finalist at Oklahoma -- are also early in their pro careers.

Tagovailoa, who went on to the most prolific career of any QB in Crimson Tide football history, was named the CFP title game's Offensive Most Valuable Player. He was selected No. 5 overall in the 2020 NFL Draft by the Miami Dolphins

Iconic sports moments never die, and for these Alabama fans (and probably some disgruntled Dawgs), "2nd-and-26" is etched in their minds and hearts forever.

This article was originally published January 9, 2020.

MORE: The Story of Alabama's Trophy that Shattered and Still Fetched $100K