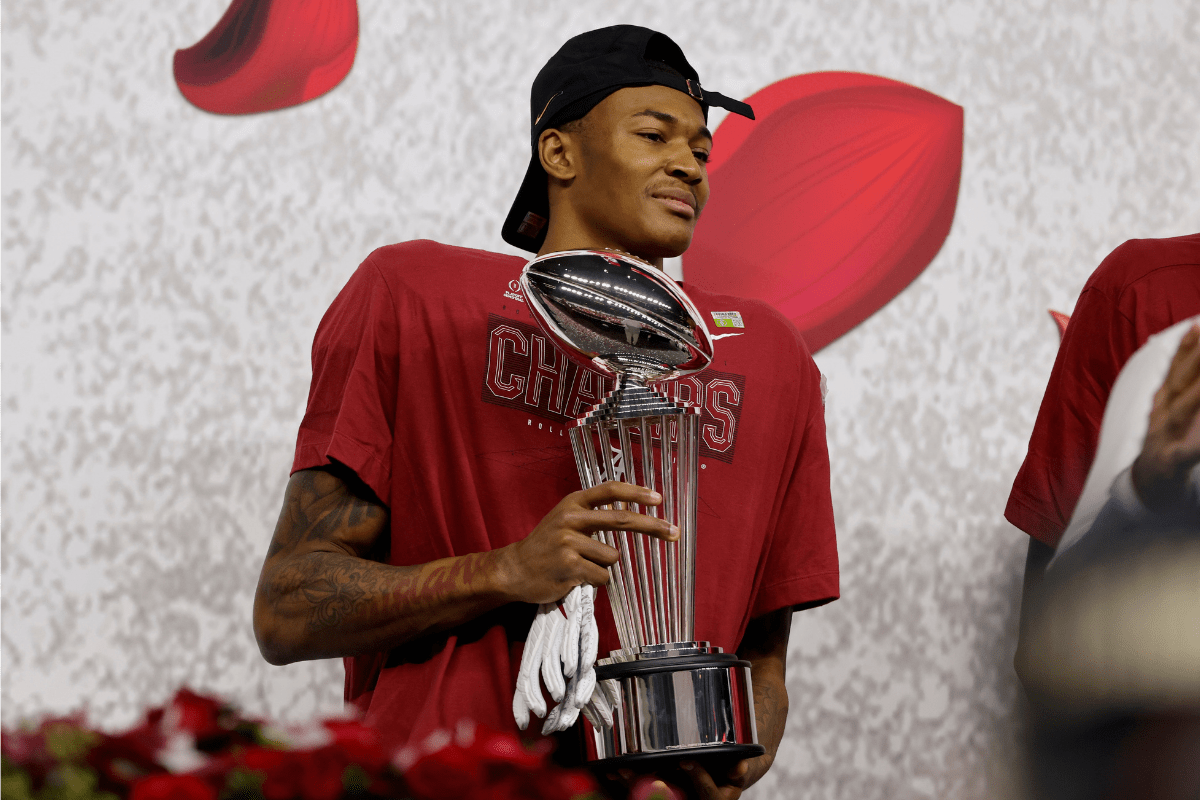 Former University of Alabama wide receiver DeVonta Smith is coming off an historic college football season that saw him become both a Heisman Trophy winner and a national champion.

Smith, of course, became the first wide receiver to win the prestigious award since Desmond Howard in 1991.

While the entire Alabama Crimson Tide fan base was ecstatic to watch his dominance, no one was happier or prouder than the superstar wideout’s parents.

Who Are Devonta Smith’s Parents?

RELATED: How DeVonta Smith Cemented Himself as Alabama?s Best WR Ever

DeVonta Smith grew up in Amite City, Louisiana, and was raised by parents Kelvin Dickerson and Christina Smith-Sylve. He also has a younger brother named Christian.

Kelvin is the manager at a car detail shop, and Christina is a social worker who earned her degree in social work from Southern University and Agricultural & Mechanical College in Baton Rouge.

When they’re not working, Smith’s parents are his biggest fans.

Even though they couldn’t be in attendance when Smith won the Heisman, they were celebrating on ESPN.

After a standout high school career at Amite High Magnet School, DeVonta Smith first got into game action in Tuscaloosa during his true freshman season. Across appearances in eight games, Smitty logged eight receptions for 160 yards and a trio of scores, including one of the biggest touchdowns in Crimson Tide history.

Smith took a step in his sophomore year and became a bigger part of Nick Saban’s offense, helping lead Alabama to the College Football Playoff National Championship Game against Clemson.

As a junior, Smith and Jerry Jeudy were the top targets for quarterback Tua Tagovailoa. The lean wide receiver recorded 68 receptions for over 1,200 yards and found the end zone 14 times.

While Smith was solid throughout his entire career for the Crimson Tide, none of his prior campaigns hold a candle to what he did during his senior season.

In 2020, Smith emerged as arguably the best player in the nation. He racked up 117 catches for 1,856 yards and 23 touchdowns as the premier target for Mac Jones. He also earned Offensive MVP honors in the CFP national title victory over Ohio State after recording 12 catches for 215 yards and three touchdowns.

The 22-year-old American football player was named SEC Offensive Player of the Year in 2020. He also won the NCAA’s Maxwell Award and the Paul Hornung Award.

SEC teams are well aware of his talent. He scored four touchdowns in a game against Mississippi State, three against Ohio State, LSU and Notre Dame, and two against the likes of Auburn, Georgia, Kentucky and Florida. There were only three games all season in which Smith didn’t score a touchdown.

With DeVonta Smith’s sights set purely on the NFL Draft, you can bet your bottom dollar his parents will be brimming with pride when his name rings down from the podium in Cleveland.