As enjoyable as the Fourth of July is, celebrating the United States' independence can be rather dangerous. Perhaps no one knows this better than Tampa Bay Buccaneers defensive end Jason Pierre-Paul.

In 2015, when JPP was a star defender and member of the New York Giants, he was involved in a serious fireworks accident on Independence Day which completely altered his life and football career. Then, he used the incident to get the word out about the dangers of lighting off fireworks.

Luckily for him, he's still able to play the sport he loves.

(Warning: Some images are graphic. Seriously, we mean it.)

According to CBS, Pierre-Paul had reportedly purchased $1,100 worth of fireworks for a display for friends and family at his home in South Florida, less than 50 miles from downtown Miami.

Having almost used all of the fireworks by midnight, a friend of JPP suggested they light off the remaining fireworks. After a few unsuccessful attempts at igniting the fireworks, JPP gave it one more go, and that's when things took a sharp turn in a negative direction.

Pierre-Paul blew up part of his right hand in the offseason accident and was rushed to a nearby emergency room for treatment at a local South Florida hospital. While Pierre-Paul admits he doesn't remember much of what occurred in the ER, he does remember begging the nurses not to remove his hand.

"Whatever y'all do, do not cut my hand off," he said, per Sports Illustrated.

What Happened to JPP's Hand?

He stayed three weeks in the hospital, undergoing as many as 10 different surgeries to salvage his right hand, including having a dozen pins placed in it and having a skin graft from his forearm to his palm.

He also had his right index finger amputated, something which was revealed by ESPN's Adam Schefter and resulted in a lawsuit against ESPN, but ultimately was able to save the hand. His middle finger, as well as the rest of his hand, was also badly hurt.

Schefter defended his actions tweeting out a copy of Pierre-Paul's medical records in an interview with Sports Illustrated.

"This was a public figure and franchise player involved in a widely speculated accident with potential criminal behavior in which there was a cone of secrecy that surrounded him for five days that not even his own team could crack," Schefter said.

Per Sports Illustrated, the Giants only learned of the situation via posts on social media. Pierre-Paul missed eight games of the 2015 NFL season, but the NFL player eventually was able to get back on the gridiron for the first time since the hand injury.

At the time of the horrible accident, JPP was a two-time Pro Bowl defensive end and outside linebacker, a First Team All-Pro selectee, and a key cog in the New York Giants defense. The team had just placed him under the franchise tag and had plans of signing him to a lucrative contract extension.

Having proven himself as one of the best linemen in pro football, losing JPP was a big blow for the team and his wallet, but his recovery was far quicker than anyone had expected.

Jason Pierre-Paul Made the Best of a Bad Situation 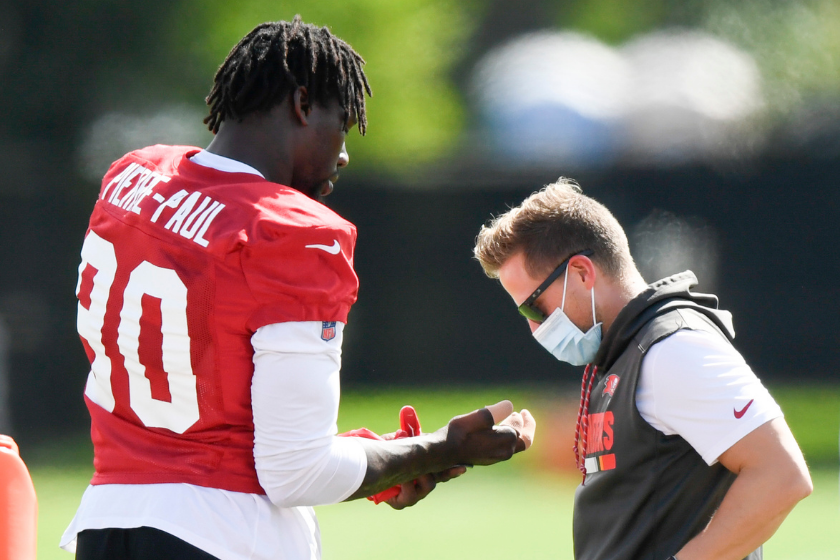 Since the injury, he's appeared in fireworks safety videos to inform people about the dangers of lighting them off.

The former 2010 NFL Draft first-round pass rusher produced in the years following the injury and was rewarded with a four-year, $62 million contract extension with the Giants in 2017 -- the team he won a Super Bowl matchup against Tom Brady and the New England Patriots in 2011.

The 2017 season would be his last with New York, however, as he was traded to the Bucs in 2018 in exchange for a third- and fourth-round pick.

He made an instant impact for the Buccaneers, sacking New Orleans Saints quarterback Drew Brees in his first game with the team. Talk about a making an introductory statement to the franchise!

The Deerfield Beach High School grad stayed in Tampa, finishing a two-year, $25 million deal under head coach Bruce Arians. He missed some games in 2019 after an offseason car accident, but returned to his dominant, healthy self in 2020.

The DE was back to wreaking havoc in the trenches, helping force interceptions and making tackles against the likes of the Saints, Falcons and Panthers in the NFC West, as well as the Steelers and Titans in the AFC last season. His hopes to return to the playoffs for the first time since 2011 came true.

After defeating Aaron Rodgers and Green Bay Packers, Tampa Bay finally slowed down head coach Andy Reid, quarterback Patrick Mahomes and the Kansas City Chiefs from scoring touchdowns in Super Bowl LV. Pierre-Paul was as much of an integral part to that as Rob Gronkowski and Antonio Brown.

Jason Pierre-Paul's hand may never be the same, but at least he has a Super Bowl ring on it. And if there's a takeaway from his story, it's that when life hands you lemons, make lemonade.

No, that's not it. Please be safe and don't be a fool when playing with fireworks. Jason Pierre-Paul was lucky enough to have been blessed with top-tier athletic abilities and was able to return to the field and make millions of dollars. If that were to happen to any one of us, we may not be so lucky. So please, be responsible when around fireworks. Not everyone can be as lucky as Jason Pierre-Paul.

MORE: Tom Brady's Parents Have Been Married More Than 50 Years