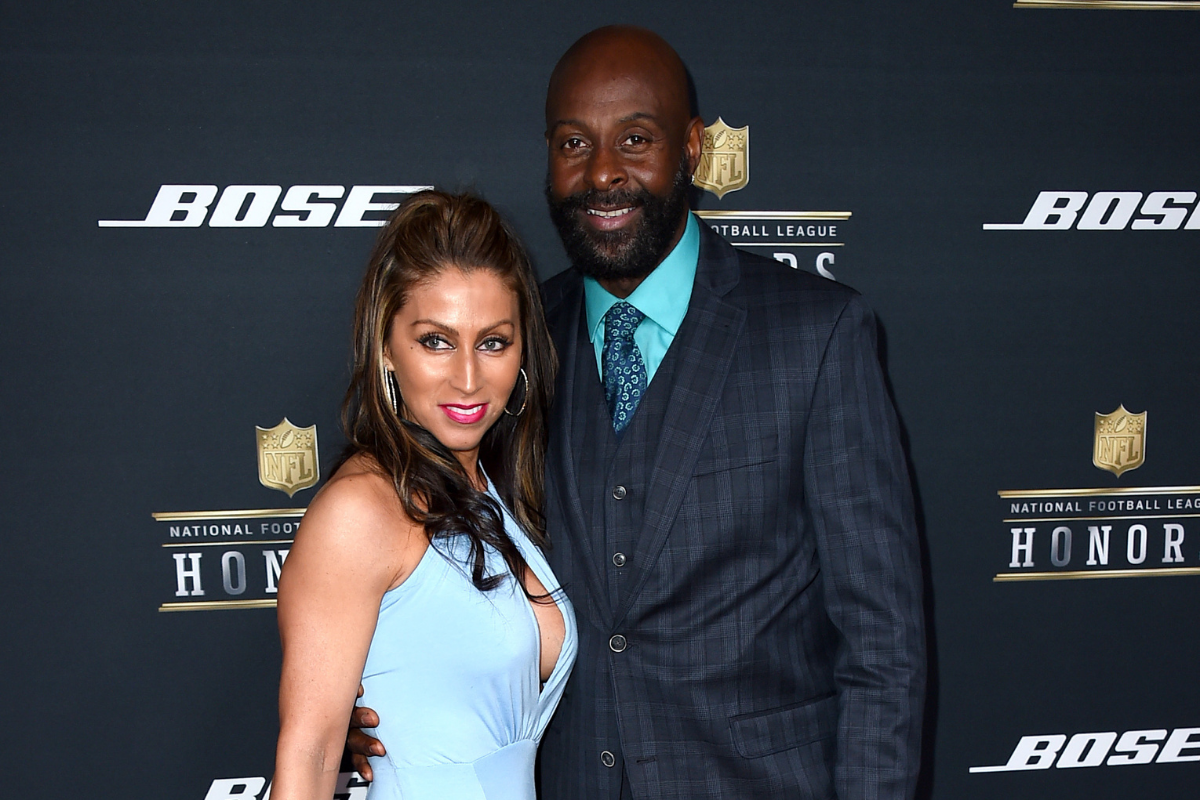 All-around nice guy Jerry Rice was far more vicious on the football field than his looks lend him. His round face, contagious laughter, and friendly smile betray a man who once struck fear in the hearts of NFL defenses.

Many say Rice is the greatest wide receiver of all time. With his receiving yards, touchdowns, Pro-bowl selections, college career, and three Super Bowl wins with the San Francisco 49ers, who’s to argue?

Megatron can’t stand up to it; Odell Beckham Jr. is nowhere close.

But what’s the GOAT been doing since he retired? Well, you know… GOAT stuff.

Jerry Lee Rice was born on the spooky date October 13, 1962, in Starkville, Mississippi — the home of the Mississippi State “not-Georgia” Bulldogs.

With young Rice receiving and Willie “The Satellite” Toten tossing, The Delta Devils ran college football’s first spread, over their opponents, and into the College Football Hall of Fame.

In 1984, they (they mostly being Rice and Toten, dubbed “The Satellite Express”) averaged over 61 points a game and regularly destroyed opposing defenses.

After becoming one of college football’s greatest players, Rice was sure to cook in the pros.

Rumor has it they created the 🐐 emoji because of Jerry Rice.

But he truly was one of the most remarkable athletes in NFL history. #NFL100 (🎥 @NFL) pic.twitter.com/J6b6Hr3V9K

Jerry Rice was the 16th-overall pick in the 1985 NFL draft. San Fran traded up with the Pats to snag him. Patriot fans have regretted that trade ever since, but I think they’ll be okay.

With Rice on their side, the 49ers were formidable for a very, very long time. Rice squeezed the best years out of Montana then swapped him for Steve Young. The Hall of Famer regularly torched the NFC and the Dallas Cowboys.

The NFL player put The City on his back for 14 seasons, earning twelve Pro-Bowl appearances and three Super Bowl rings (including Super Bowl XXIII) in the process. The New York Giants stopped him from becoming a three-peat Super Bowl Champion, but the greatest wide receiver of all time didn’t care! His damn nickname is GOAT!

Randy Moss may disagree, but that’s for another article.

Randy Moss and Jerry Rice have many things in common, including playing for the Oakland Raiders. Rice would finish his career in the new Millennium with the Raiders, Seattle Seahawks, and Denver Broncos.

Life in the Limelight

Well, there was that. Rapping didn’t pan out, so Jerry tried his sticky hands at acting, too. San Francisco to Los Angeles is only a short plane ride away.

Jerry mostly plays himself, and he mostly does it well. But where Rice truly shone was in the world of video games.

He did shine on ABC’s “Dancing with the Stars” early into his retirement, but more on that later.

Dude was a cheat code in “Backyard Football,” though not as much as the almighty Pablo Sanchez.

I won many a Backyard Bowl by throwing the ball Rice’s way and letting him run circles around safeties. But back to the article.

Who is Jerry Rice’s Wife?

Jerry Rice has been married twice. His first marriage was to Jacqueline Bernice Mitchell and lasted for much of his playing career. They were divorced in 2009.

In 2008, Rice began to date esthetician (see: make-up saleswoman) Latisha Pelayo. The couple reportedly met at a gym… and that’s about all the general public knows about her.

Pelayo keeps her private life tight and for that, who can blame her? With “Internet Sleuths” like me snooping around, it’s best to protect yourself. If the girl is looking for security, she’s found reliable hands in Jerry’s.

When Did They Get Married?

Rice had been with Pelayo for over 10 years. He knew it was time to pop the question. The only question for Jerry was how.

He chose the 2018 DeBartolo Family Foundation All-Star Charity Gala in Tampa, FL, in front of a crowded audience. It was a smart move by “Flash 80” – what kind of a monster would deny the GOAT his proposal on stage at a non-profit fundraiser?

The couple wed at Calistoga Ranch in Napa Valley, California, and, for some reason, let PEOPLE Magazine cover the event. I can’t figure that one out.

Pelayo and Rice are still married, but don’t have children together. Rice’s capable hands are full with the three from his first marriage… and the one from an affair.

His firstborn was Jacqui Bonet in 1987. Jacqueline Bonet Rice has worked as an actress, singer, and even started her own online business. Get it, girl.

In 1991, Rice welcomed Jerry Rice Jr. to the world. Jerry Jr. had a respectable professional football career and could never be accused of getting by on his father’s name. He is a successful real estate agent in San Francisco, keeping the Rice family in The Bay.

Jada Symone was born in 1996. She reportedly caught COVID-19 during the pandemic and lived to tell the tale.

Brenden Rice was born in 2002 as the result of an extra-marital affair. As a freshman wide receiver for the University of Colorado, Rice had some solid stats in 2020. We may yet see another Rice in the NFL.

Where Are Jerry and Latisha Rice Now?

Jerry and his family live in the San Francisco Bay Area. Their movements are regularly reported on social media and TMZ.

When he’s not mentoring Antonio Brown (pre-break down), calling the game for Fox Sports, or celebrating “Jerry Rice Day” in Mississippi, Jerry Rice is probably dancing.

Dancing With The Stars

As a professional football player, Rice danced in end zones. Now that he’s in the Pro Football Hall of Fame, he only dances for private weddings or public television.

In season two of ABC’s smash hit “Dancing with the Stars”, Rice proved a better Goat than Fox. Jerry Rice and partner Anna Trebunskaya placed second in the competition which, all jokes aside, is pretty damn impressive.

Minor technical errors cost Rice a point on his Foxtrot in the finals, and the pair fell second best to second-best Lachey Drew and his partner Cheryl Burke.

Jerry Rice, a man who loves football, found love again and again throughout his life. Jerry is a philanthropist and has a grantmaking foundation in the Bay Area, Jerry’s adopted community.

He’s come a long way from Mississippi, but then again, they do call him Jerry “World” Rice: the greatest wide receiver in NFL history.

MORE: Jerry Rice?s Net Worth: How Rich is the NFL Legend Today?