In the 1990s, the NFL was lucky enough to have the best of the best at their positions play against each other. Jerry Rice and Deion Sanders each ended their careers as arguably the best wide receiver and cornerback ever, but another debate needs to be settled: Who won the head-to-head matchup during their playing days?

Beginning in 1989, when Sanders was a rookie after being selected with the fifth overall pick in the NFL Draft, these players faced off 10 times, and I seriously doubt we will ever get the chance to see two of the greatest at their position face off one-on-one like this ever again.

Even though their teams played more than 10 times throughout their careers, there were games where one didn't play. For the first five years of Sanders' career, his Atlanta Falcons played Rice's San Francisco 49ers twice every season, but the last two of those years, Sanders didn't play in the first matchup of each year.

Sanders is sort of at a disadvantage here for multiple reasons. First, he was much younger and didn't play against Rice much when he was in his prime. Second, Rice would be able to pad his stats when covered by someone other than Sanders, so the numbers can be a little misleading.

Either way, let's go season by season to see how they fared against one another throughout their Pro Football Hall of Fame careers. 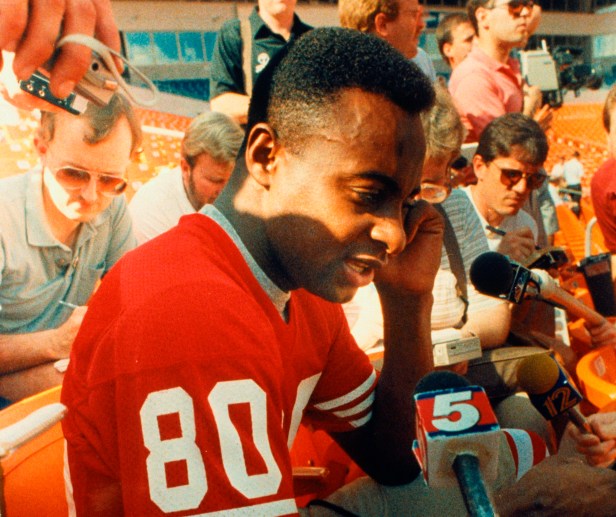 By the 1989 season, Rice had already cemented himself as one of the best receivers in the league with three-consecutive seasons over 1,000 yards, this year being the first of Joe Montana's back-to-back MVP seasons. Sanders was just a rookie for the Falcons and wasn't covering him consistently throughout the games. However, in two games, Rice combined for six receptions for 112 yards and two touchdowns.

In the second matchup of the season, Sanders had his fifth interception of the year, a number he reached four more times in his Hall-of-Fame career.

Two of the best at their position: Deion Sanders vs Jerry Rice pic.twitter.com/vfKXwoNDeS

RELATED: Jerry Rice's Net Worth: How Rich is the NFL Legend Today?

In two games during the 1990 season, Rice killed it in wins against the Falcons. In the first game of the season, Rice went off for 171 yards and a touchdown on eight receptions. He somehow beat that mark in the second matchup with 225 yards and five touchdowns on 13 catches.

The latter was his highest number of touchdowns in a game throughout his career, and third-highest total for receiving yards in a single game. It goes to show that there were just games when Rice was truly unstoppable.

A lot of you never got to watch Jerry Rice vs Deion Sanders... such a great matchup back in the day man.

Sanders and the Falcons had much more success stopping Rice during the '91 season and won both games. In the first game against the 49ers, Rice had 138 yards and a touchdown on seven catches, but in the second game, he had just 44 yards on six receptions after Steve Young left the game and was replaced by Steve Bono.

Sanders recorded his second career interception against San Francisco with a 23-yard return. 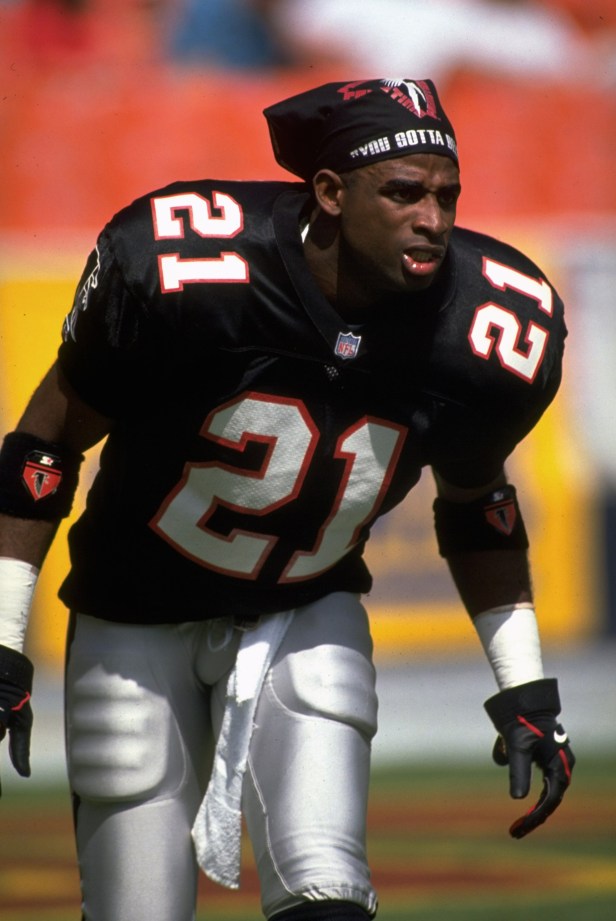 The '92 season is when we saw the difference Sanders could really make. In the first game against San Francisco, Sanders didn't play and Rice went for 185 yards and two touchdowns on seven catches. Three weeks later, with Sanders back on the field, Rice was held to four catches for 45 yards and a touchdown, even though the 49ers won both games in blowouts.

The 1993 season is the last time these players would play against each other multiple times in a season, but Sanders once again didn't play in the first matchup of the year. Without Sanders playing, Rice only caught three passes for 33 yards, but went for 105 yards on six catches later in the season against Prime Time. In the first game, Rice also had a 43-yard rushing touchdown.

Sanders did return in the second game, though, and intercepted two passes, which was his best game against Rice as far as interceptions go. 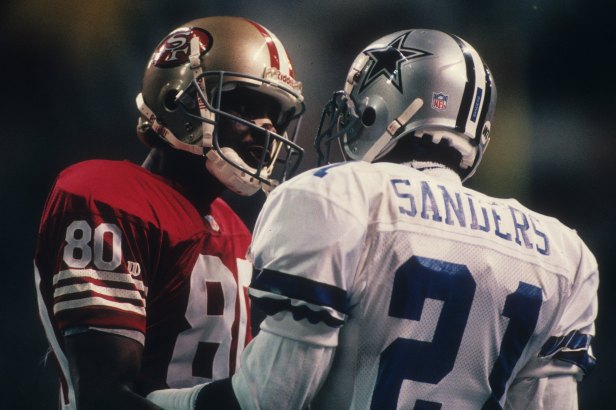 After spending the '94 season as members of the same team and winning the Super Bowl together, Sanders joined the Dallas Cowboys. In their only game against one another during the 1995 season, Rice caught five passes for 161 yards and a touchdown. Sanders played in just nine games that season.

With Elvis Grbac leading San Francisco at quarterback for most of the game, the Cowboys would go on to win this contest against the 49ers in overtime. Rice had just 49 yards on five catches. Sanders had almost as many receiving yards with 34 on two catches, though he had 11 targets in the game.

Although each of them would play for quite a while longer, they wouldn't play against each other again. In 1997, Dallas played San Francisco, but Rice was injured for most of the season, playing in just two games. In that game, Sanders had an interception he ran back for 31 yards.

Who Won This NFL Matchup?

It is difficult to decide which player won a matchup when they played different positions. It is like comparing ESPN to the NFL Network. Rice was able to put up amazing statistics, and Sanders was one of the biggest game-changers in the league for over a decade and stats can never show just how amazing he was.

Almost any other receiver in this conversation, and it would be tough to go away from Sanders, but Rice torched every cornerback in the league and wasn't really slowed down much against Neon Deion. Rice did have some down games when covered by the best corner in NFL history, but those were also games when he had to play with a back-up quarterback.

Rice didn't dominate this matchup like he did against just about everybody, which shows how good Sanders was, but he was still great in these games.  Over the 10 games they played against each other, Rice averaged about six catches for 105 yards and a touchdown. That is actually much better than his averages over not only his career, but also his career in San Francisco without the last few years in Oakland and Seattle.

So even though it's tough to choose between two legends, Jerry Rice won this battle between the best player at their positions.

This article was originally published June 19, 2019.

MORE: Bo Jackson Stiff-Armed Deion Sanders Like It Was Nothing