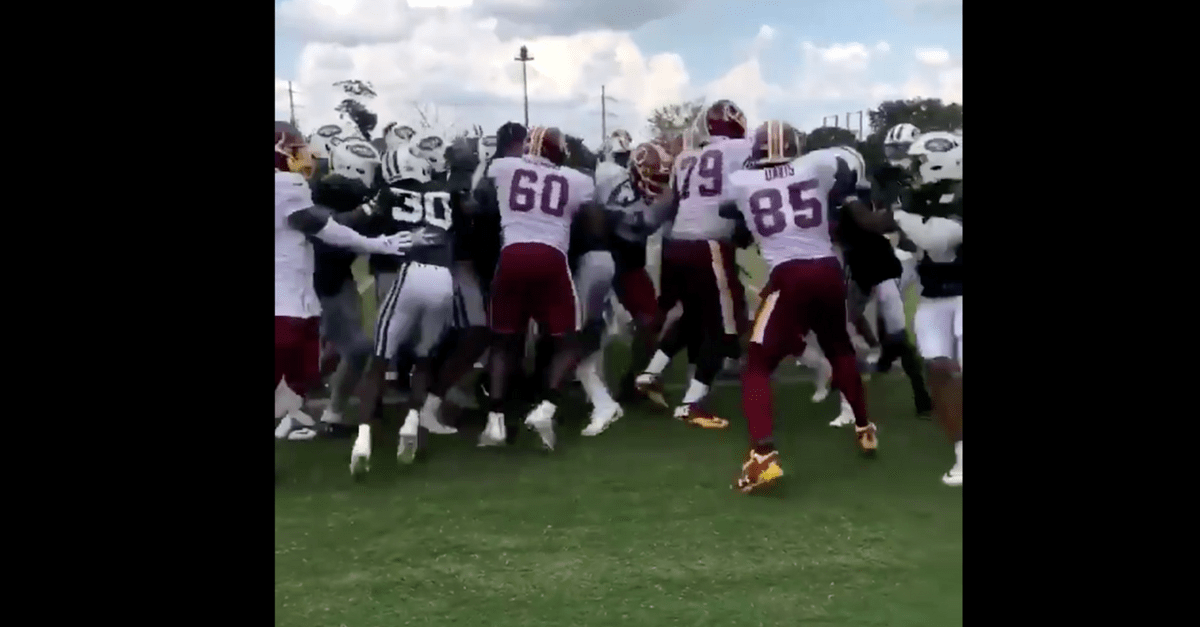 As summer moves into the middle of August, sweltering heat and humidity is driving us indoors in search of as much air conditioning as we can get. At NFL training camp, where the second week in a row of padded practices is underway, the temperature isn’t the only thing getting out of control.

Just ask the New York Jets and Washington Redskins, whose first of three joint practices Sunday exploded into a team versus team fight that spilled into where fans and reporters watched from the sidelines.

The Redskins ran a sweep to running back Chris Thompson before being forced out of bounds on a short gain. That’s when things got testy.

A scuffle formed when Jets cornerback Trumaine Johnson delivered a late hit on Redskins offensive tackle Morgan Moses. The two teams came together and a war of words appeared to be exchanged.

Then, you can see Redskins left tackle Trent Williams come around to the back of the mob, shove a Jets player, and the punches started flying.

Boys will be boys…

Training Camp Fight between the #Redskins and #Jets.

They have a joint practice.pic.twitter.com/sWaeOGb0rK

And with that, we can officially declare the NFL season open for business.

?If they wanted to be boxers and wrestlers, they?d probably be in another sport,? Jets head coach Todd Bowles told reporters. ?We?re trying to get better. They?re trying to get better. Some things happened ? overzealousness. I?ll talk to my guys. [Washington] Coach [Jay] Gruden will talk to his guys and we?ll have better practices because that?s just a waste of time to me.?

There hasn’t been any discipline to come down from either team, although you’d have to imagine some sort of punishment during what is supposed to be an important work day for both squads.

The Jets versus Redskins battle Royale wasn’t the only training camp fight on Sunday, though.

Jaguars Pro Bowl defensive end Yannick Ngakoue and his teammate Dante Fowler mixed it up and had to be separated by teammates.

After 11 consecutive padded practices, tempers flared during a #Jaguars team period Sunday and continued afterward when Dante Fowler and Yannick Ngakoue repeatedly had to be separated by teammates. https://t.co/8DtCN9kLBV pic.twitter.com/D9V6GhDC8h

What’s most bizarre about this fight is how cornerback Jalen Ramsey decided to respond via Twitter to the reporter who captured the fight on camera.

Ramsey came at Florida Times-Union beat writer Phillip Heilman, which earned Ramsey, as well as Fowler, each a week-long suspension for “violating team rules and conduct unbecoming of a Jaguars football player” on Sunday.

@phillip_heilman you know you done messed up right? Lol if y’all want war, we got sum for y’all. & Iknow the rest of y’all (you know who you are) gone read this too so just know #LameAssReporters

The #Jaguars confirm that CB Jalen Ramsey and DE Dante Fowler have each been suspended for incidents that occurred Sunday.

The #Jaguars are not announcing a length on the suspensions. If @RapSheet is correct and it is a week, that would put one or both players out for two joint practices and possibly a preseason game.

It’s only the preseason, but these guys are already gearing up for another year of NFL football come September.

Hopefully, everyone gets this stuff out of their system by then.

The Jets and Redskins will play practice together the rest of the week ahead of Thursday’s preseason game at 8 p.m. EST on ESPN.

READ MORE: The 8 Most Ridiculous Overreactions of the NFL Preseason