JJ Watt has never wanted things to be about him. Not when he was raising millions of dollars after Hurricane Harvey devastated Houston. Not when he was winning three NFL Defensive Player of the Year awards or racking up 111.5 career sacks. And certainly not as he walked off the field following his final home game.

The 33-year-old defensive end announced his retirement after the Arizona Cardinals' 19-16 loss to the Tampa Bay Buccaneers on Sunday, writing in a tweet that he had played his "last ever" NFL home game. 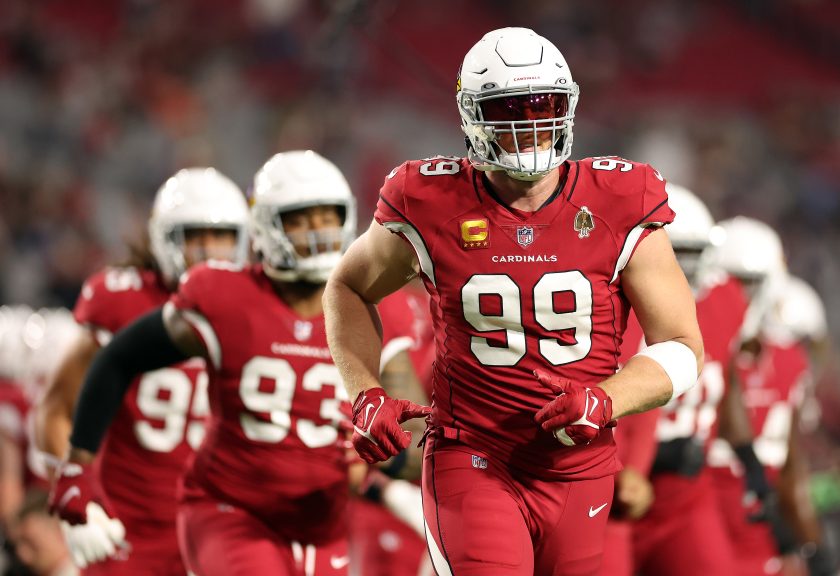 "Koa's first ever NFL game. My last ever NFL home game. My heart is filled with nothing but love and gratitude. It's been an absolute honor and a pleasure," he wrote, accompanied with pictures of his wife, Kealia Watt, their son, Koa Watt, and his parents, Connie and John Watt.

My heart is filled with nothing but love and gratitude. It?s been an absolute honor and a pleasure.

Earlier this year, Watt experienced a pretty scary incident with his heart. He had his heart "shocked back into rhythm" after it went into atrial fibrillation that same week. He played in Arizona's game that week, too. His son was born later that month, maybe putting some things in perspective for Watt and his family.

I was just told somebody leaked some personal information about me and it?s going to be reported on today.

I went into A-Fib on Wednesday, had my heart shocked back into rhythm on Thursday and I?m playing today.

If this is his final NFL season (Tom Brady has really changed what "retirement" looks like these days), Watt will undoubtedly go down as one of the greatest players ever, defensive or offensive. He's won three DPOYs, a mark only Aaron Donald and Lawrence Taylor have tied. He's also a five-time First-Team All-Pro and a surefire member of the Pro Football Hall of Fame when he's eligible. He'll also have made more than $129 million in NFL contracts over his 12 seasons.

Off the field, Watt figures to continue doing amazing things. His foundation raised and distributed more than $40 million in the aftermath of Hurricane Harvey, an effort he still proudly pins to his Twitter profile:

The 2017 Walter Payton NFL Man of the Year award winner has become known as the good guy of the NFL. He's offered to pay for a fan's grandfather's funeral after learning she was trying to sell his merchandise to pay for it; and just this season, he paid out a fan's parlay that didn't hit because of a blown call in a Cardinals game.

No matter who you are or what team you root for, it's impossible not to like JJ Watt. He went from two-star recruit to community college pizza delivery driver to Wisconsin walk-on and eventually to NFL Draft first-round pick and so much more since then. It's the epitome of a never-give-up-on-your-dream story.

As he plays his final two games this season -- at Atlanta and at San Francisco -- let's just all be happy that we were able to witness his greatness, both on and off the field.

MORE: From 2-Star to Superstar: J.J. Watt's Football Career is a Story of Perseverance