Bears coach throws former regime under the bus: “We inherited a mess” 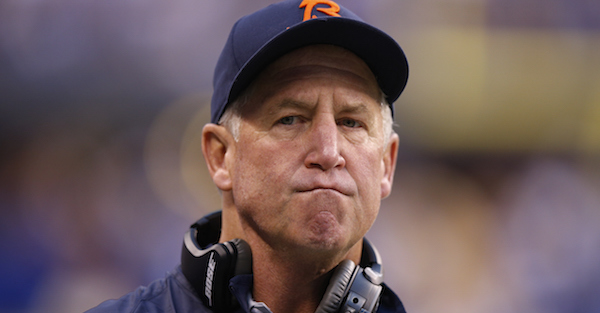 The John Fox era in Chicago was unproductive from the start, and he was fired following a 5-11 campaign in 2017.

The Bears finished last in the NFC North in each of Fox’s three seasons, and he was 14-34 during his tenure with the franchise. But he believes part of the reason why they struggled is because he inherited a disastrous situation from the previous regime.

Marc Trestman went 13-19 the two years before Fox took over, and Fox told NBC Sports Chicago that he believes the Bears are close to a turnaround.

“It would’ve been nice to see it through,” Fox said. “That’s kind of a bitter pill but you sort things out and move forward.

“I do think it’s closer than people think. We inherited a mess … but I felt we were on the brink at the end. I think that [Halas Hall] building is definitely different; they feel it. I do think that it was a positive.”

Related: Four-time Super Bowl champion has reportedly made decision on his NFL future

Matt Nagy will take over the Bears this season after spending four seasons with the Kansas City Chiefs as an assistant. He’ll have second year quarterback Mitch Trubisky and some other young pieces to work with, but a good portion of the roster still needs work.

“You wish some things would’ve happened differently obviously,” Fox said via NFL.com, “but there was a lot positive that happened.”

The NFC North was one of the toughest divisions in the NFL over the last couple of seasons, and it will likely continue to be difficult with the return of Aaron Rodgers and the emergence of the Minnesota Vikings.

We’ll see if Fox’s prediction will come true and the Bears turn the corner soon under Nagy.