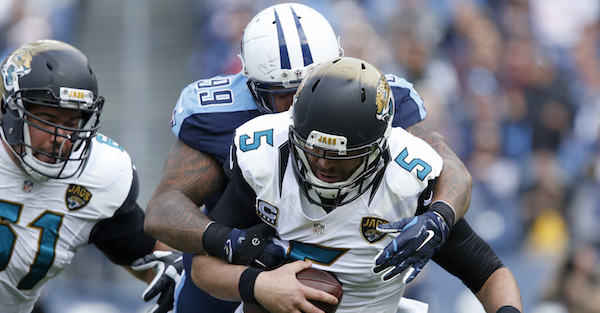 The Tennessee Titans earned a playoff berth after they defeated the Jacksonville Jaguars for the second time this season, and both AFC South rivals will play in the postseason.

“As long as Bortles is back there, if the ball game is in his hands, he’s going to choke,” Casey said via Pro Football Talk.

The Jags are in the playoffs for the first time in 10 years, and their defense has led the way for most of the season as they won the AFC South. Bortles completed 60-percent of his passes while throwing for 3,687 yards, 21 touchdowns and 13 interceptions on the year, but his accuracy and decision-making are still concerns as the team heads into the playoffs.

Related: NFL coach thought to be on his last legs shockingly ends up with a new contract

Bortles threw two picks against the Titans last Sunday in a 15-10 loss, though the game didn’t have an impact on Jacksonville’s seeding in the playoffs. He also threw two interceptions during the first meeting between the two rivals, which was a 37-16 Tennessee win.

Casey said he wasn’t impressed by any part of Jacksonville’s offense this season.

Casey said on Twitter that he was just hyping up his defense, but his comments on Bortles certainly seem more personal than that.

Chill, y’all. I was just hyping our defense. If we put the pressure, some QBs will choke.#OnToKC#TitanUp https://t.co/tWnuLPXK2X

Unfortunately, these two teams likely won’t meet again until next season unless they can make the AFC Championship Game, but Bortles and the Jaguars will definitely remember Casey’s comments when they play again.