After Tua Tagovailoa withstood his Week 4 concussion, the Dolphins made a change at quarterback that didn't bring to the table an unknown quarterback. In fact, it brought up one of the most well-known quarterbacks in the NFL, given that he's played for half the teams. In all seriousness, Teddy Bridgewater has only played for five teams, but when Bridgewater came in for the concussed Tagovailoa, Dolphins fans weren't all that worried about the likelihood of losing with Bridgewater. Being 33-31 in his career, he's been able to come into bad situations and make the most of them.

That is, until he was concussed shortly after the kickoff of Week 5.

So, who's slinging the rock for the Miami Dolphins with both of their quarterbacks are out? A seventh-round rookie quarterback out of Kansas State-- Skylar Thompson. Let's get to know the five-year starter from Palmyra, MO.

At Kansas State, the Skylar's the Limit 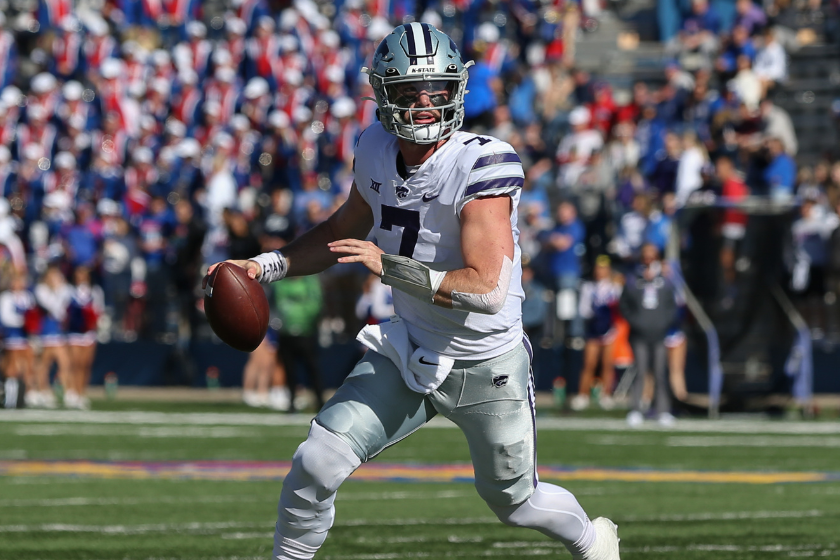 Prior to going to Kansas State to pursue his football career, Skylar Thompson was the No. 2 quarterback in the state of Missouri, and he was the 95th ranked quarterback in the nation. At Fort Osage High School, Thompson combined for 6,222 yards, 71 passing TD, and 14 INTs. In his senior year alone, he threw for over 2,000 yards and had 25 TDs to just three INTs.

Along with what he was able to accomplish with his arm, he was a force with his legs, too. In his four years at Fort Osage, he ran for 1,879 yards and 39 TDs with 21 of those TDs coming from his senior year.

Once high school was over, Thompson went to Kansas State University to continue his journey to become an NFL quarterback. After five seasons with the Wildcats, Thompson was 552/885 (62.4% comp), and he threw for 7,124 yards, 42 TDs, and 16 INTs. At K-State, Thompson tied the school record for most touchdown drives in the fourth quarter to either tie or take the lead, which dates all the way back to 1990.

Based solely off of stats, it seems like this guy can play. However, when looking at the actual game, maybe he was just in the Big 12 where stats can get padded from time-to-time. That said, Thompson turned his first ever NFL Preseason into the reason he's even on the roster.

In his first NFL Preseason, Thompson was the No. 1 quarterback in passer rating (138.4) and passing touchdowns (five). Along with that, he was top-10 in yards (450) with a clean slate of turnovers.

However, after watching him in relief of an injured Teddy Bridgewater, he was alright-- nothing great, nothing terrible. He made some plays, but he also missed some plays. It was about as average as average gets, besides the turnovers. Thompson was 19/33 (57.6% comp) for 166 yards, 0 TDs, 1 INT, and a fumble.

Maybe he's not Tua, but considering he's the third-string QB, he could've been a lot worse. For Dolphins fans, they're hoping for a Tom Brady story with this kid, or at least a 1-0 record as a starter.

MORE: Negligence By the Miami Dolphins Could've Cost Tua His Career, Or Even His Life