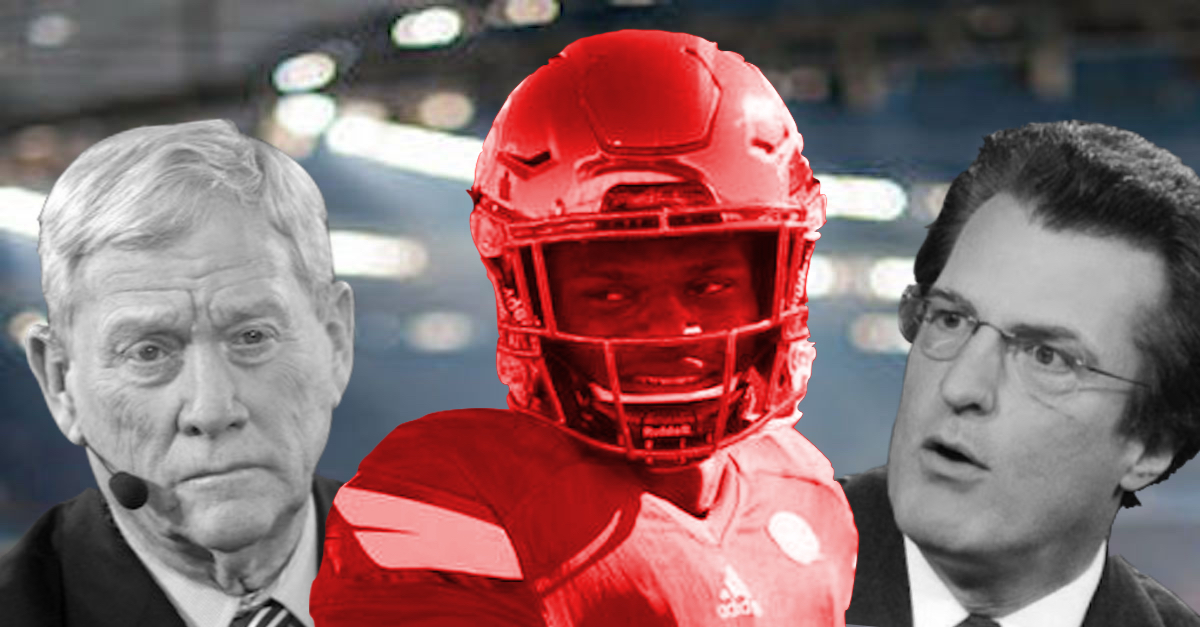 Polian’s recent antics of calling for Jackson to move to receiver are not new. He began this crusade back in September on an ESPN LA radio show. During it, he degraded Jackson’s accuracy and questioned his frame. The same shtick he used on Golic and Wingo this month.

Apparently, a full season of college football couldn’t change his mind. Often touted as one of the best executives in the National Football League’s history, Lamar Jackson was always going to be a receiver to Polian — data and a season of football be damned.

Why? Don’t you worry. We will get to that.

Polian, the far easier to lambaste for his takes on the quarterback position, is not the only person who tries really hard to put one kind of prospect on a pedestal, while diminishing another via roundabout talking at the same time.

As it is turning out to be with Mel Kiper, the information used to talk positively or negatively about any player only applies when he deems it fit. Or, more accurately, when it fits into a narrative.

For both Polian and Kiper, these narratives aren’t dangerously close to being agendas, they actually are just that.

Bluntly put: Jackson, who by all metrics had a better season than presumed No. 1 overall pick Josh Allen, is missing a bunch of immeasurable information. The reason his data is unimportant, at least in comparison to Allen, is because the tangible data differs from Kiper and Polian’s viewpoint — though, their viewpoint continues more to seem like belief structures than opinions.

Magically, this blind ignorance is over a dynamic quarterback who is statistically more accurate, has nearly as strong an arm, and can do more on the field because he is mobile, than their favorite pet in Josh Allen.

This issue is widespread and built within the NFL’s infrastructure

Alex Smith, Aaron Rodgers, John Elway, Big Ben, were all once considered as “mobile” quarterbacks when each came out of college. Few questioned much about them, and they especially didn’t suggest any should change position.

On the flip side, Warren Moon was forced to play in an entirely different league because the NFL wanted to see him at defensive back; Randall Cunningham long had to hear about his style of quarterback being ill-equipped to win; Michael Vick — even at his peak with the Atlanta Falcons — constantly came under fire for not throwing from the pocket more; and so on.

When Aaron Rodgers evades pressure, he’s creative and has a high IQ. When it is Cam Newton or any other black signal-caller who also had the ability to move, they are considered an injury risk and/or incapable of being a pocket-passer.

A great, and unfortunate, recent example of how we view white Qbs vs their black counterparts is Colin Kaepernick. Removing the noise from it all, people who said he wasn’t good enough to get a job talked about him needing a “certain system” to play in, ignoring that the majority of his passes actually came from the pocket.

There is this weird need for people to rationalize something that is only irrational because NFL coaches are far less creative than collegiate masterminds — mobile (cough, black) quarterbacks can only thrive in certain systems.

“You have to build the entire thing around them,” someone says while ignoring how most offenses are indeed built around its quarterback, regardless of skin color.

If this were as simple as people souring on mobile quarterback prospects out of fear of injury, though, this discussion would be far simpler. It would still be wrong, because being able to evade hits seems like a far better option that not being able to, but at least it wouldn’t be as coded.

Pigeonholing Jackson as just an electrifying runner, while ignoring the other data that states he’s also a good pocket-passer, is slightly nefarious — if not worse.

“I don’t think that Lamar, the Louisville kid’s in that discussion, in fact there’s a question that he may be, he might be a receiver.” Polian said, as transcribed by The Big Lead, back in September. “No, I’m not kidding you. And that has to do with girth and skill set as well.”

Oddly enough, only a few years prior, Polian was not afraid to endorse a prospect with less size and girth.

Bill Polian: Johnny Manziel has magic. If you're in the Browns draft room, you owe it to the fans to consider taking him at 4. #SXMNFL

There is a difference here between Manziel and Jackson. For fun, let’s see another example of how Bill Polian believes a National Football League quarterback should look like.

Bill Polian said Blake Bortles would be the first QB he'd take in this year's draft. Has all of them at the bottom of the first, though.

For the sake of cleanliness: Last season, Josh Allen’s numbers were objectively worse than Jackson’s. He completed 56-percent of his passes, tossed it around for 1,812 yards, and had only 16 touchdowns to his six interceptions. Wyoming, a team that clearly played inferior competition when compared to Louisville, won eight games.

Jackson’s last collegiate season: He completed 59-percent of his passes, threw for 3,660 yards, and had 27 touchdown passes to 10 interceptions. Louisville won 8 games as well, but did have to navigate the ACC, not the bluh MWC docket Allen was afforded.

For fun, Jackson also ran for 1,601 yards… which is apparently a bad thing.

The excuse usually given here is that Allen had less this season. That is brought up while ignoring Jackson played against more. And yet, even if we want to combat that nonsense with data, we can.

Aside: Even if you want to concede Allen had no talent around him, he was still playing against teams that also lacked it. He was supposed to be the superstar playing among average players, which should offset this notion that he suffered because his teammates were bad. The opponents were also bad, if not worse.

“You have to look beyond the stats,” Kiper Jr. said. “Stats are for losers in my opinion in a lot of ways. The kid won. You say what was his record? When he was out there, they won football games. The stats, a lot of guys have stats and can’t get their team over .500. Wyoming this year lost four key guys to the NFL.”

Former Miami Hurricanes quarterback Ken Dorsey went 35-2 in his last three college football seasons. He was not a good NFL gunslinger. John Elway, while at Stanford, maxed-out with a six-win season as a sophomore.

Allen, who only went 16-11 with Wyoming during his collegiate tenure, had several NFL players at skill positions in 2017 as Kiper mentions. Despite that, in the 2017 season, he still only completed 56 percent of his passes. He was, even with all that professional help in a conference of ho-hum competition, as inaccurate with pros as he was without.

It can’t be both. Allen can’t be a winner when not actually winning and bad last season because he lost pros, yet was still bad the year prior with them.

Kiper is trying really hard to explain away Allen’s negatives as a player with what are, in fact, lies.

Sit on that last part for a minute. Sit on the word lies. Because that is what he is doing. He is lying about — or, if we are being polite, purposely ignoring — stuff that goes against a guy he wants to talk positively about.

He is not a winner, nor was he better when he had better teammates. He was nearly the same, save for his raw yardage number being better in 2017 — and that’s not what Kiper or Polian are talking about, as each continue to use this weird efficiency thing to justify their positions.

Allen’s data and play are things that should lead to reasonable questions.

Was Allen somewhat made by the talent around him when he had those pros — ala Christian Hackenberg’s freshman season at Penn State — and instead of him looking worse this year because of missing that talent, maybe he was actually exposed as not that good?

Those things never get brought up by the likes of Kiper and Polian. Instead, the data is ignored and the excuses flow like a river following a torrential downpour.

Yet, both go out of their way to question Jackson. There are no excuses. No mention of his teammates maybe not being great, or a coach not trying to develop him, or anything. Eh, I’d digress, but we’re not done yet.

Remember that above quote when Kiper talked about “stats are for losers” and all of that jazz?

“It’s the accuracy throwing the football,” he said. “Finished career around 57 percent.”

Oh, so now the stats matter? It doesn’t matter for “his” guy, but it does when it isn’t someone that fits what he believes to be a good prospect.

Kiper would go on to say the difference in completion percentage was because Jackson had “layups” while Allen had to make tougher throws. That is another lie. Stuff he’s literally making up to explain why he’s higher on Allen and low on Jackson.

Allen head-to-head with Jackson in yards per attempt: 6.7 vs. 8.5 (in favor of Lamar) last season. Basically, Jackson was tossing it deeper down the field on average than Allen.

We can also mention that 20 percent of Jackson’s incompletions last season were actually drops by Louisville players. Honestly, we can do this all day because the data doesn’t just largely wide with Jackson, it only sides with him.

Again, here we are, with Jackson being better in the efficiency data and both Polian and Kiper remain adamant in claiming Allen is the more efficient passer.

It is likely why Kiper downplayed the importance of stats. There happens to be no evidence to support Allen as a more accurate quarterback than Jackson. None. And even when you insert the “he lost four guys to the NFL” caping in there, all it takes is one look at college football reference to see Allen was as inefficient with good players around him as he was this past season.

You can question Jackson as a prospect. You can. There are ways to do it. You could point to his seemingly only slight development from his Heisman campaign to his last in college, or a billion of other things that aren’t wholly dismissing him — you know, while ignoring information that paints him in a positive light and then using what are flat lies in the process.

Then again, Kiper and Polian go well out of their way to make a bevy of excuses for Allen, roping tired cliches around him that were previously tossed around other inept, large quarterback prospects. They do this because, otherwise, there’s no proof to explain why they are so consistently high on tall white quarterbacks, but are quick to question Jackson.

That benefit of the doubt given to Allen, it isn’t a luxury afforded to Jackson. I’d say “maybe it is about time we start asking why,” but we already know the answer.