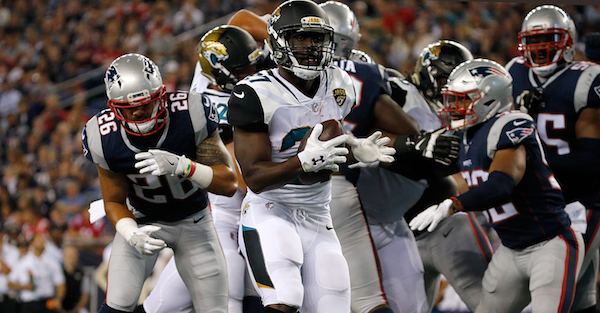 Jim Rogash/Getty Images
FOXBORO, MA - AUGUST 10: Leonard Fournette #27 of the Jacksonville Jaguars scores a touchdown at the end of the second quarter against the New England Patriots during a preseason game at Gillette Stadium on August 10, 2017 in Foxboro, Massachusetts. (Photo by Jim Rogash/Getty Images)

When their team was on the clock in the first round of the 2017 NFL Draft, Jacksonville Jaguars fans knew exactly what was about to go down.

They saw Leonard Fournette’s name on the board and could practically feel the rush of watching him pound the rock into the end zone while wearing a Jaguars uniform.

And after having watched Fournette run for 31 yards and a touchdown on nine carries in his preseason debut, which Fournette considered to be “really easy,” Jacksonville fans would surely be nervous to find out their newly drafted tailback was held out of practice with a foot injury.

Jacksonville head coach Doug Marrone said on Sunday that the team is “being very careful” with Fournette right now.

The former LSU star is expected to get the bulk of the carries in the Jaguars backfield this season. However, Jacksonville still has Chris Ivory and T.J. Yeldon behind Fournette. As long as the rookie is held out, they’ll be expected to step up on his place. Fournette also had injury concerns while at LSU and according to coach Ed Orgeron, it was the reason he missed his last bowl game against Louisville.