Making a field goal during a football game is hard. Don't listen to anyone who tells you otherwise. The pressure alone makes it tough and opposing players trying to block a kick only adds to the difficulty. Remember this the next time you blame the kicker for your teams loss. Despite all this, somehow, the best NFL kickers make it look easy.

Throughout the years, there have been some incredible legs to blast pigskins through the uprights. A few of them have even made the Pro Football Hall of Fame. It's definitely not the most glamorous job in the world, but it can do more than just pay the bills if you're one of the best at it.

As for the longest field goal in NFL history, that used to belong to former Denver Broncos kicker Matt Prater, who boomed a 64-yarder back in 2013. That changed during the 2021 season when the Baltimore Ravens and Detroit Lions met at Ford Field.

DID THAT JUST HAPPEN?!?!

With three seconds left in the fourth quarter and his team down 16-17, Ravens kicker Justin Tucker lined up an ambitious field goal attempt. He took a few steps and swung his leg with as much power as he could.

The booming 66-yarder bounced off the bottom of the crossbar and into the net. Just like that, Tucker not only won the game for his team at Ford Field but set the record for longest field goal in NFL history.

Trailing 21-17 at the end of the first half, the Denver Broncos sent out kicker Matt Prater to make his second field goal of the game. It was a gamble, no doubt, but it was worth the chance to cut the Tennessee Titans lead and go into halftime at Sport Authority Field at Mile High with some momentum.

Up to that point, four NFL players had made a 63-yard field goal. Nobody had cleared it from 64. That's what Prater was facing, though, and he was ready to make history.

Prater did his normal routine. He took a deep breath. Then, he kicked the living crud out of the football with his right foot and needed every gust of wind and the thin Colorado hair in his favor to squeak it over the goal post. The NFL record was his and, despite trailing in the game, several Broncos players rushed the field like they had just won the Super Bowl.

"Such an awesome moment, I'm glad it came in a win," Prater said. "It was crazy, it was awesome because almost the whole team rushed the field after that kick. It definitely was a momentum swing."

Denver rolled over Tennessee in the second half to win 51-28. Prater made three field goals and six extra points that December afternoon. None were obviously more impressive than his 64-yarder before halftime.

It remained the longest in NFL history until Justin Tucker dethroned Prater. There have been longer field goals in high school, NCAA college football and NFL preseason, but none longer during the National Football League regular season or playoffs than these two. 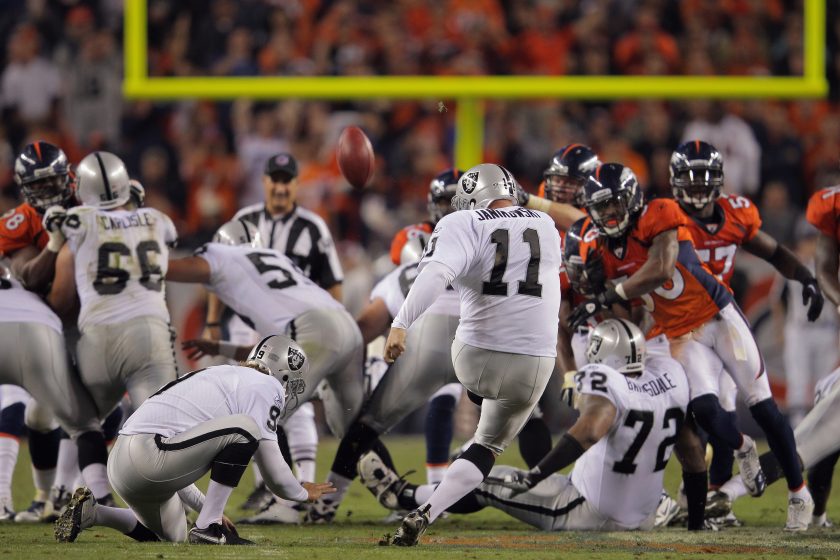 Since the NFL-AFL merger in 1970, there have been 25 field goals over 60 yards. Some kickers have even flirted with the record recently, including Graham Gano's 63-yard game-winning kick against the New York Giants in 2018 and Brett Maher's 63-yarder against the Philadelphia Eagles in 2019.

Here is the full list of the longest NFL field goals of all time with assistance from the Pro Football Hall of Fame:

Touchdowns are cool, but so are long field goals. Many unfortunate teams like the Detroit Lions have been on the wrong side of history, too. And, any team who faces the Ravens has the unfortunate circumstance of facing Tucker's leg.

It was only a matter of time before the record was broken during the NFL season. Brandon McManus wanted to be the guy, but Tucker showed everyone why he's the greatest.

MORE: The 11 Strongest Arms in NFL History Could Throw it a Country Mile