Being a kicker in pro football, college football or even high school is a tough task. One gust of wind can be the difference in becoming the next Justin Tucker or ex-Florida State kicker Roberto Aguayo. Some placekickers nail game-winners and are hoisted up by their teammates. Some are sent death threats and get chewed out by their coaches.

Considering a field goal post is just 18.5 feet wide in the NFL and NCAA, sending 50-yard field goal attempts through the uprights is incredibly difficult. Nailing a game-winning kick from 60 or more yards is even more incredible. It never hurts to have a little luck, like this double doink that somehow went in.

Heck, if Alabama had nailed their long field goal attempt in the 2013 Iron Bowl, we would have never seen the majesty that is the Kick Six.

Plenty of kickers have nailed field goals from 70 and 80 yards in practice without massive linemen in their way or defenders breathing down their necks. Heck, even Chad Ochocinco proved you just need leg strength to send a 60-yarder through the uprights into the end zone. Yep, you read that right. Chad Ochocinco.

Matt Prater owns the longest field goal in NFL history. He bombed one 64 yards as a member of the Denver Broncos before halftime against the Tennessee Titans in 2013, breaking the record set by New Orleans Saints' Tom Dempsey in 1970 and matched by names like Jason Elam, Sebastian Janikowski, David Akers, Graham Gano and Brett Maher. But all of those kickers need to start their careers somewhere, be it Georgia, Nebraska, Ohio State, Oregon or Arizona.

While that's a great trivia question, an even tougher question might be the longest successful field goal in college football history. Let's just say Ove Johansson had Prater beat. Easily.

According to the NCAA, the wind was blowing hard that day in Abilene, Texas. I'm talking 17 MPH type stuff. Officials recalled that the kick would've been good from 75 yards.

I gotta say, it's pretty odd watching a kicker take his place on the opposite side of the 50-yard line. Johannson hit his from his own 41-yard line. After the ball sailed majestically through the gusty air and over the crossbar, he and his teammates went wild. They knew he just made history.

"It was exciting to get on that field knowing if I make this field goal then I will do something that no one has ever done in the sport," Johansson recalled of that football game to NCAA.com. "One of the refs got kind of upset because he had to walk all the way down there (to retrieve the ball)."

Incredibly, Johannson had only kicked four field goals in his collegiate career prior to that moment. He went on to become the first Swedish-born player to play in the NFL. He made just one of four career field goal attempts with the Philadelphia Eagles.

Still, his booming kick was better than any touchdown in that game. And at 72, he can still say he's the record holder. 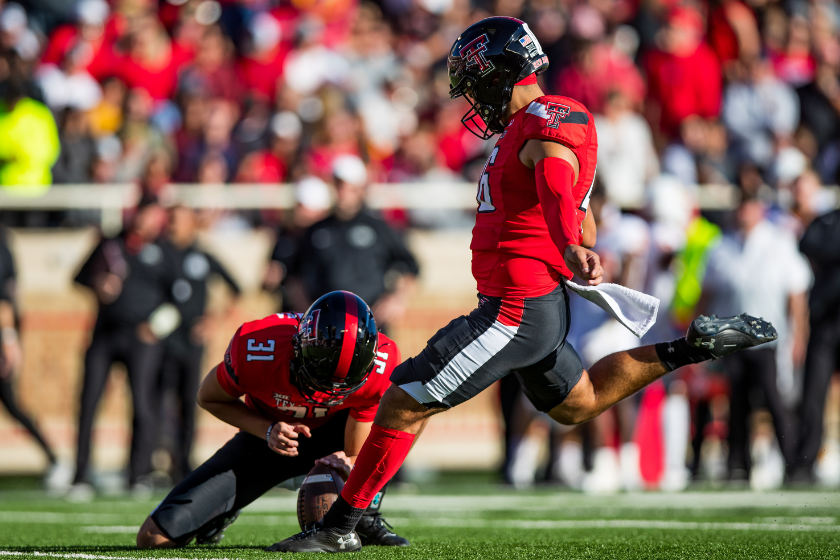 Johannson may own the longest in the history of college football, but 67 yards is the longest in NCAA history. The NCAA record is shared by multiple players.

These long-range attempts were much easier before the NCAA banned the use of a tee in 1988. The longest made field goal in NCAA history belongs to Martin Gramatica, who drilled a 65-yarder with Kansas State against Northern Illinois in 1998. He went on to win a Super Bowl and have an impressive NFL career lasting nearly two decades.

Below is a list of the longest field goals in NCAA history:

That last dude, Tony Franklin, was known for his barefoot kicking style. Coincidently, the Texas A&M University kicker set the record for the longest field goal in D-I history (65 yards against Baylor University) the same day Johannson drilled his record field goal. He then hit a 64-yard kick in the same game, making him the only kicker in NCAA history to make two 60-yard field goals in the same game. In recent years, we've seen 60+ yarders from kickers like Texas Tech's Jonathan Garibay.

And because you must have been wondering, the longest drop-kick field goal in college football was Pat "Kangaroo Kicker" O'Dea for Wisconsin against Northwestern in 1898. That was good from 62 yards in the middle of a blizzard.