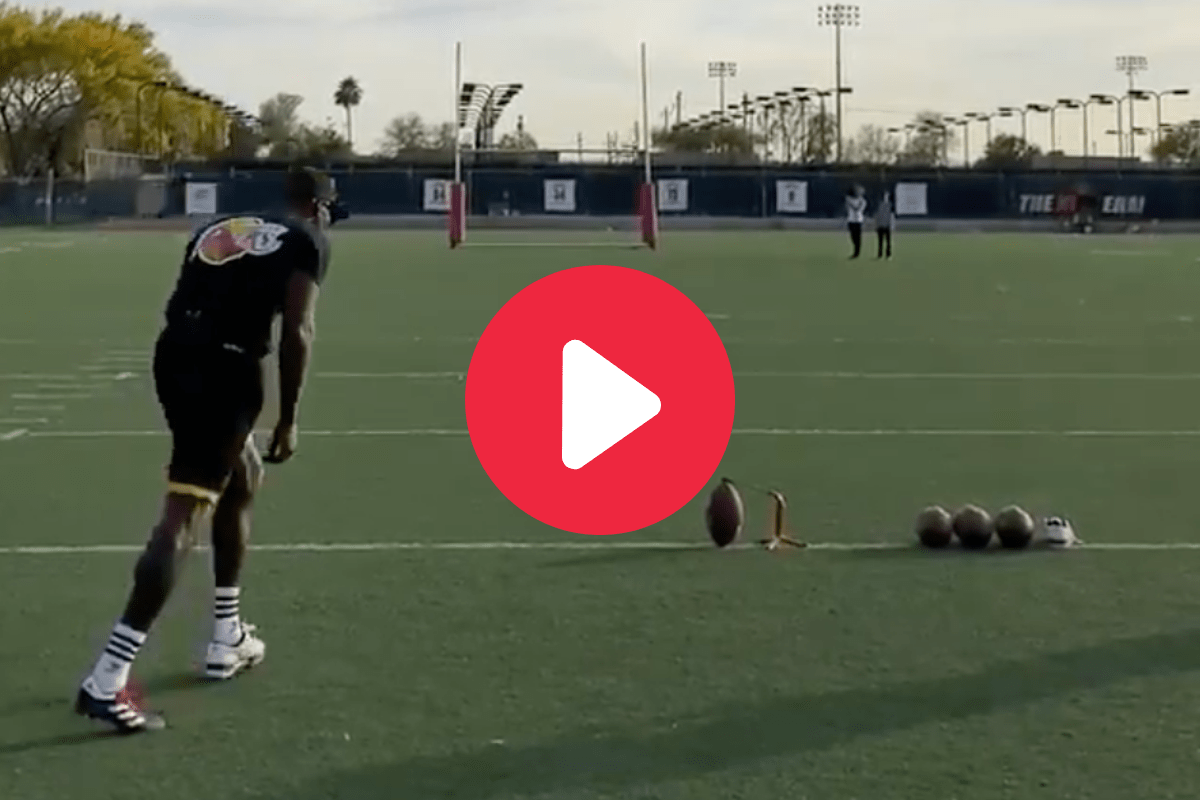 Chad Johnson hasn’t played an NFL snap since 2011, but that’s not going to stop him. The love he has for the game will never go away and he continues to show it each and every year. However, instead of running routes, the former Pro Bowl wide receiver was looking to make a comeback at a new position: placekicker.

In December 2019, the three-time First Team All-Pro formerly known as Chad Ochocinco decided to show off his right leg on social media by making a 60-yard field goal and going crazy in celebration.

That’s right, the former NFL star from the Cincinnati Bengals and New England Patriots was ready to be an NFL kicker.

Definitely trying out as a kicker in the NFL next year, if they give me a shot it’s a done deal easily‼️

“Definitely trying out as a kicker in the NFL next year, if they give me a shot it’s a done deal easily,” the six-time Pro Bowler posted in a tweet.

“good from 60 yards with no cleat on the plant foot” -Pepe pic.twitter.com/aAzE2PHEp8

Once upon a time, Johnson led the league in receiving yards. He also caught touchdown passes from Tom Brady. But kicker? That was a new one from the now 43-year-old.

Without a cleat on his pant foot, Johnson casually runs up to the ball and drills it through the uprights. It was impressive, no doubt, and his wild reaction shows how excited he was.

Johnson, a former second-round pick in the 2001 NFL Draft who last played in the preseason for the Miami Dolphins in 2012, clearly still has the passion to play. This isn’t the first time he’s shown off his field goal skills, but this was perhaps the most impressive.

Random Highlight of the Day: #Bengals WR Chad @ochocinco kicked an extra point in a game against the #Patriots to take a 7-3 lead.

Throughout his NFL career, which was all in the AFC, Johnson hauled in 766 passes for 11,059 receiving yards and found the end zone 67 times. It might not be enough to get into the Pro Football Hall of Fame, but he was one of the most dynamic players and polarizing figures in the game.

Johnson getting a tryout would have been magical, whether he made the 53-man roster or not.

The opportunity to kick in the XFL has presented itself, i must tryout Monday in Houston, I’m excited as hell & I’m sure all will go well 🙏🏿

Although no NFL teams have reached out after his viral field goal, wide receiver Chad Johnson was almost booting extra points, kickoffs during the XFL season.

“The opportunity to kick in the XFL has presented itself, I must tryout Monday in Houston, I’m excited as hell & I’m sure all will go well,” he wrote on Twitter.

The XFL, of course, didn’t survive and Johnson never got his official chance. Maybe an NFL team will give him a shot.

MORE: Kicker Banks Field Goal Off Both Uprights, And Somehow Makes It