Beast Mode is Back! Marshawn Lynch Signs with Seahawks 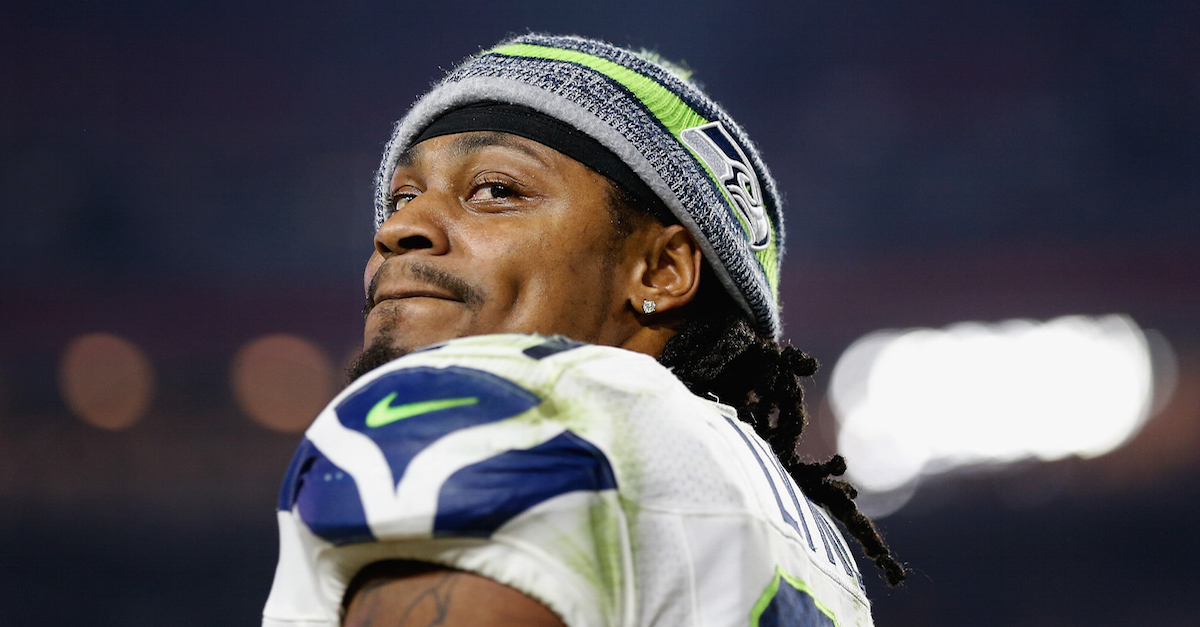 Marshawn Lynch is your favorite football player’s favorite player. Beast Mode captivated NFL fans for being an honest, hilarious bruising running back that no linebacker or defensive back ever wanted to go one-on-one against.

One can never have enough Marshawn Lynch in their life. Devouring Skittles during games, “I’m just here so I won’t get fined” interviews and legendary golf cart rides are all part of what makes Marshawn so authentically awesome. No one can break off a 70-yard touchdown run then make us laugh quite like Lynch can.

Though we’ve been missing Lynch, it appears there’s a chance the running back could return to the Seattle Seahawks in what would be an incredible reunion.

According to a report by NFL Network‘s Ian Rapoport, Mike Garafolo and Tom Pelissero, Lynch and the Seahawks are open to a reunion. Lynch even made plans to travel to Seattle on Monday to discuss coming back to the team he won a Super Bowl with.

Marshawn Lynch and the #Seahawks are open to a reunion, and Lynch has told people he plans to travel to Seattle today to discuss it, sources tell me, @MikeGarafolo and @TomPelissero. #BeastMode could be back in Seattle.

Lynch was beloved during his six seasons with the Seahawks from 2010-15. Known for his immense strength and ability to break tackles, the five-time Pro Bowl selection posted 6,347 rushing yards and 57 rushing touchdowns during his time in Seattle and helped win Super Bowl XLVIII over the Denver Broncos.

Lynch Last Played for the Raiders in 2018

The 33-year-old played in the NFL with the Oakland Raiders last season but did not sign with a team this season. Lynch played in six games and rushed for 376 yards and three touchdowns that season.

Just this month, the 12-year veteran was handing out shots at a Raiders tailgate. Now he could be back suiting up in the NFL.

The Seahawks are looking for running back help after a series of injuries have decimated their depth at the position.

Starter Chris Carson suffered a season-ending hip injury in the team’s loss to the Arizona Cardinals, and running backs C.J. Prosise (broken arm) and Rashaad Penny (knee injury) are both out for the rest of the season already. Rookie Travis Homer is the lone back on Seattle’s active roster.

In addition to maintaining interest in Lynch, the Seahawks are meeting with former Seattle running back and free agent Robert Turbin, according to NFL Network.

Pete Carroll is Welcoming Lynch Back

The Russell Wilson-led Seahawks are 11-4 heading into a Sunday night showdown against the San Francisco 49ers (12-3) that determines the NFC West champion and possibly home field advantage throughout the playoffs. A loss would mean the Seahawks end up as a wild card alongside the Minnesota Vikings.

Bringing back Lynch could be an odd move depending how well he’s kept in shape. Regardless, I’m sure head coach Pete Carroll would welcome the former Seahawks players back on the sideline.

“We’re going to give him a really good chance to come back and play for us,” Carroll told 710 ESPN Seattle, via Adam Schefter.

Please, Beast Mode, sign the contract. I’m on my way to buy Skittles.

Beastmode officially is back in Seattle. Marshawn Lynch and the Seahawks have an agreement, and Seattle has a new RB to line up against SF during Sunday night’s NFC-West-deciding showdown.

UPDATE (December 24, 2019): Lynch passed his physical and officially re-signed with the Seattle Seahawks the same day that Ronnie Turbin ? a fourth-round draft pick by the Seahawks in 2012 ? was also signed by the team to bolster their depleted running back group.

This article was originally published December 23, 2019.