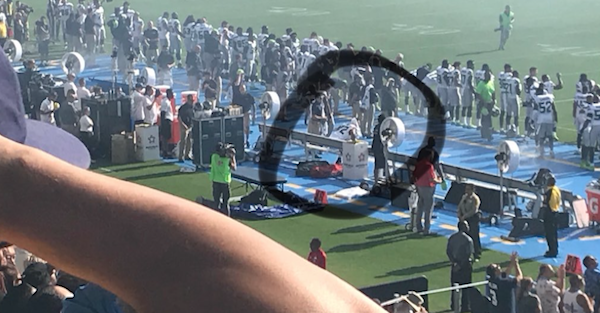 Last season, in a show of solidarity, the Seattle Seahawks linked arms instead of following Colin Kaepernick’s route and kneeling or sitting during the national anthem.

Rest of Seahawks locked arms as they had last season. Bennett sat on bench behind rest of team with a towel around shoulders.

The move comes after Bennett criticized the NFL for not signing Kaepernick, via Seattle Times:

Bennett’s former teammate Marshawn Lynch stirred up the NFL as well on Saturday evening before the Oakland Raiders preseason contest, opting to sit for the national anthem than stand. After head coach Jack Del Rio spoke out on Lynch’s past of standing or sitting during the national anthem and pictures seemed to contradict that idea, former NFL wideout Andrew Hawkins has pushed back:

@MichaelDavSmith read your story on PFT, just passing these along! Check dates.. pic.twitter.com/FXAWQGyXAp

When asked about the decision, here’s what Del Rio said:

Apparently he just hasn’t done it, at least consistently over the last 11 years:

Last season, during Kaepernick’s controversial decision to kneel during the national anthem, here’s what Lynch said, as transcribed by CBS Sports: