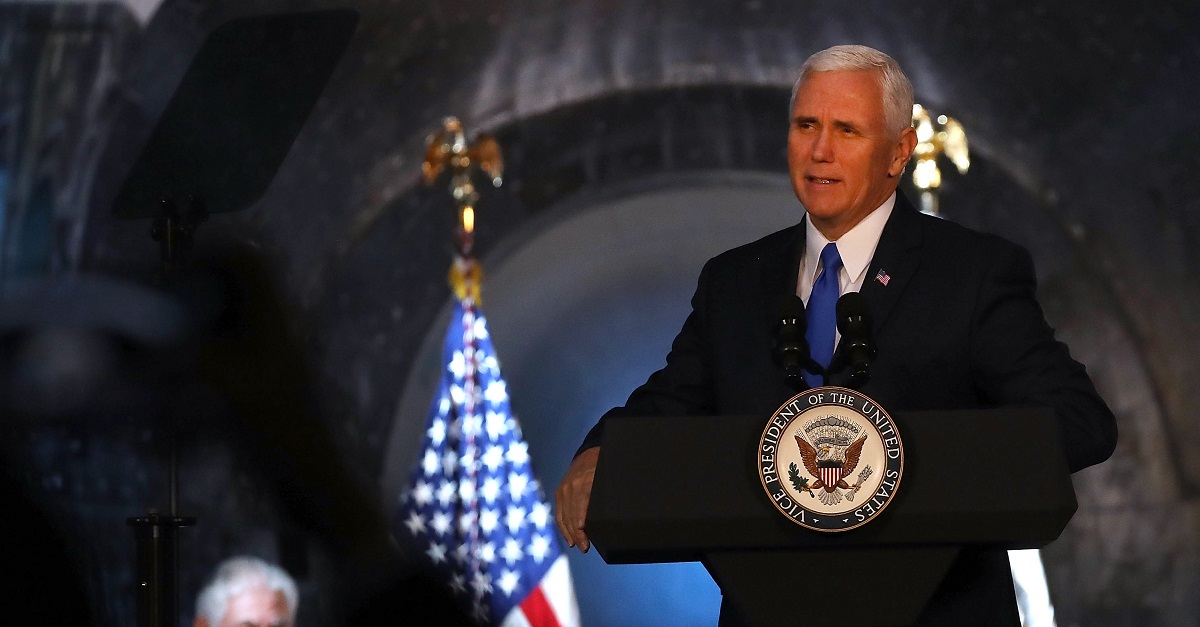 Mark Wilson/Getty Images
CHANTILLY, VA - OCTOBER 05: Vice President Mike Pence speaks during the inaugural meeting of the National Space Council on "Leading the Next Frontier" at the National Air and Space Museum, Steven F. Udvar-Hazy Center, October 5, 2017 in Chantilly, Virginia. Originally established in 1958, this is the first meeting of the newly reestablished council in 20 years. (Photo by Mark Wilson/Getty Images)

You can count Vice President Mike Pence among those that are unhappy with the current demonstrations by NFL players during the pregame national anthem.

Pence announced on Sunday that he will not be attending any future Indianapolis Colts game — or any event featuring protests — after several players demonstrated before Sunday’s game against San Francisco.

I stand with @POTUS Trump, I stand with our soldiers, and I will always stand for our Flag and our National Anthem. pic.twitter.com/B0zP5M41MQ

“I left today’s Colts game because President Trump and I will not dignify any event that disrespects our soldiers, our Flag, or our National Anthem. At a time when so many Americans are inspiring our nation with their courage, resolve, and resilience, now, more than ever, we should rally around our Flag and everything that unites us. While everyone is entitled to their own opinions, I don’t think it’s too much to ask NFL players to respect the Flag and our National Anthem. I stand with President Trump, I stand with our soldiers, and I will always stand for our Flag and our National Anthem.”

Pence was at the game particularly to see the team honor former quarterback and NFL legend Peyton Manning.

Pence’s statement comes two weeks after President Donald Trump caused some commotion with the NFL, as Trump stated at an event in Alabama that the NFL owners’ response to the protests during the anthem should be to “get that son of a bitch off the field, you’re fired!”