After major draft day trade and abysmal start to season, No. 2 overall pick will reportedly get his first start 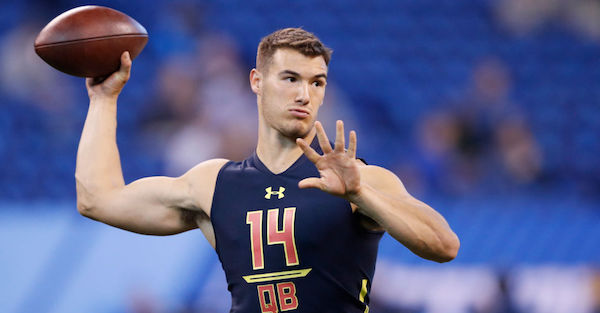 In some ways, the 2017 Chicago Bears haven’t been a disaster. The team knocked off the Steelers at home in Week 3 and, in the season opener, nearly toppled the defending NFC champion Falcons in what would have been a strong start to the campaign.

However, the team’s most recent game did not go according to plan in a 35-14 drubbing at the hands of a chief rival in the Green Bay Packers and quarterback Mike Glennon struggled wildly in front of a national television audience. As a result, there were plenty of calls for head coach John Fox to turn the reins over to rookie signal-caller Mitchell Trubisky and, as of Monday, it appears that is going to take place.

Bears have made a QB change and are going with Mitchell Trubisky, sources tell @DanGrazianoESPN and me.

Trubisky, who was the No. 2 overall pick in the 2017 NFL Draft, will reportedly be Chicago’s starting quarterback on Monday night against the Minnesota Vikings.

Mitchell Trubisky now will start his first NFL game one week from tonight vs. the Vikings.

It comes as no surprise that a team with only an outside chance to reach the postseason would go to a rookie, especially given the immense pedigree that follows Trubisky. The trade that got him to Chicago also has to be considered as the Bears moved up from the third spot up one and had to give the San Francisco 49ers their third overall pick, a third round pick, a fourth round pick and a third round pick for next year’s draft.

Still, it might strike some as early because Trubisky famously spent only one season as the starter at North Carolina and is fairly raw when compared to other top-tier prospects at the position. At the end of the day, though, it is easy to sell hope to a fan base (and to ownership) and the Bears apparently lost faith in their stop-gap option with Glennon. The new era is here and it involves Mitchell Trubisky under center in Chicago.