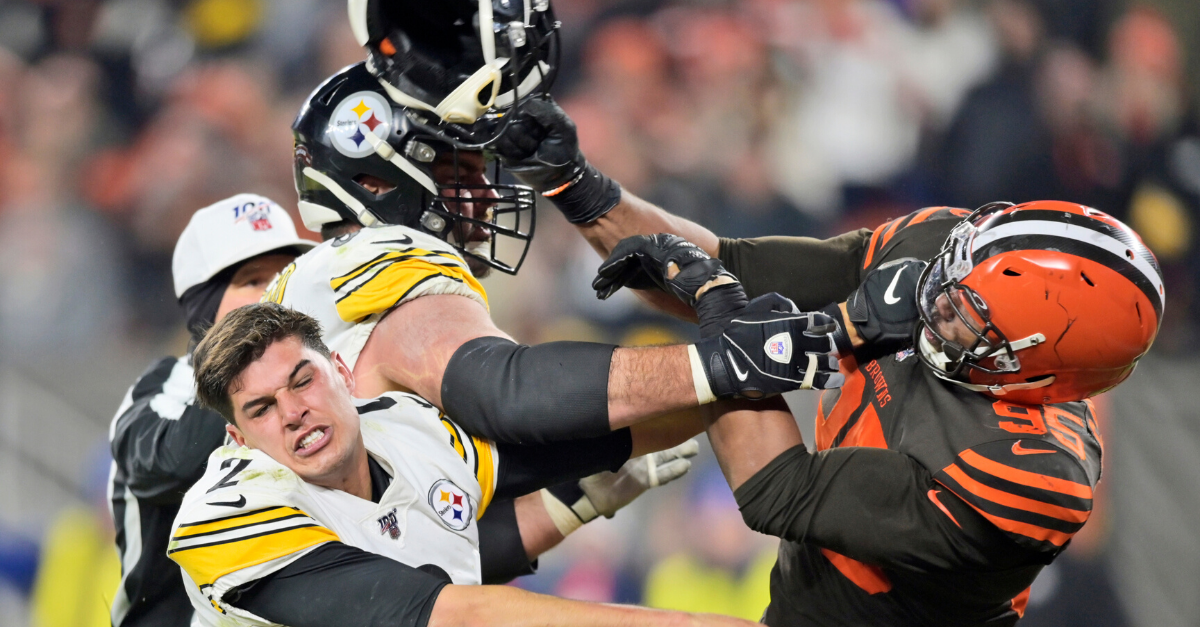 In the final seconds of the Cleveland Browns‘ 21-7 victory over the Pittsburgh Steelers, Pro Bowl defensive end Myles Garrett let his emotions get the best of him, and that’s putting it mildly. What happened at the end of an AFC North matchup on Thursday Night Football is, quite frankly, one of the most despicable and worst things you will ever see on a football field.

The Steelers were making one last effort to score on an all-around miserable night. Steelers quarterback Mason Rudolph threw a career-high four interceptions and was hounded all game long by Cleveland’s defense. With under 10 seconds to play, Rudolph flicked a dump-off pass just as Garrett arrived. That’s when things went from bad to worse to downright ugly in a split second.

As the No. 1 overall pick of the 2017 NFL Draft wrapped up Rudolph, both men tumbled to the ground. The two began pushing each other, which caused Garrett to snap. He ripped off Mason Rudolph’s helmet as Pittsburgh offensive lineman David DeCastro and Matt Feiler tried pulling him off their QB.

Then, as Rudolph tries to retaliate and square up with Garrett, the Cleveland Browns star wildly swings the Steelers QB’s helmet like it is a weapon, connecting squarely on Rudolph’s head.

After that, chaos ensued.

Crazy fight at the end of the #PITvsCLE game! Some people are going to be suspended for multiple games! Myles Garrett tries to attack Mason Rudolph with a helmet 😳😳 pic.twitter.com/RpLfbzl7ZO

1. I don’t think I’ve ever seen a QB get that involved in a fight.

3. This fight is ABSURD
pic.twitter.com/ggJe0lcmH7

Steelers center Maurkice Pouncey rushed to defend Rudolph and began punching and kicking Garrett as he falls to the ground. Both sidelines stormed into the end zone, and the brawl was quickly contained before it escalated further. When asked about Garrett’s attack and if he should be suspended for the entire season, Pouncey said, “Absolutely, 100 percent. We will see how serious the NFL is about their players.”

Lost in the melee, Browns defensive tackle Larry Ogunjobi shoves Rudolph from behind.

Here are the best angles of the all-out assault on Pittsburgh Steelers QB Mason Rudolph by Myles Garrett and Larry Ogunjobi of the Cleveland Browns #PITvsCLE pic.twitter.com/M1zgujV1kR

Steelers coach Mike Tomlin declined to comment on the fight.

“Of course that?s not who we want to be at the end of the game. That’s not who Myles wants to be. That’s not who we?re gonna be. You have to be able to maintain your composure in times like that. Under no circumstances do we want anything to do with anything like that. I’m embarrassed. Myles is embarrassed. It’s not good. He understands what he did. He understands it?s totally unacceptable and we have to get through it.”

Social media exploded after the scrum, with current and former NFL players chiming in. The most overwhelming sentiments included Garrett’s helmet swing deserving a suspension for the rest of the season, Pouncey being an incredible teammate for defending his quarterback, and sheer shock at what just transpired.

Bro i can’t even believe that just happen.

That. Is. Insanity. Wow.

I have no idea what I just saw on TNF w/ @MylesLGarrett ? How in the world can u be so unaware? How can u allow ur emotions to go unchecked & swing a helmet at another player’s head (who’s helmet u tore off to hit him with)? Im physically upset right now & I was watching on TV!

Go to @MylesLGarrett page and you’ll see the headline: “A Hero is made by the path he chooses, not by the power he is graced with.” Yet, he goes and does what he did to Mason Rudolph. This calls for an automatic SEASON-ENDING SUSPENSION. He should be DONE for the rest of the year

And btw….neither Pouncey nor DiCastro should be suspended AT ALL. All they did was protect a defenseless teammate — who happened to be their damn QUARTERBACK. They shouldn’t be penalized at all.

They’re going be some heavy suspensions. Garrett might get the rest of the season off. Pouncey gone a min of 4 gms. WTF was Garrett thinking?

Just so yall know that inside a @nfl locker room @MaurkicePouncey is a hero. He protected his QB and he was willing to risk it all for his teammate. Ain't many dogs like that left in the game. He should be fined but no Suspension for Pouncey. That's a REAL TEAMMATE! @nflnetwork

Defending himself, Garrett said, “It shouldn’t have gotten that far. That’s on me.”

This is inexcusable. The NFL will surely hand down severe punishments, and it’ll be interesting to see how this is handled by commissioner Roger Goodell. I’ve never seen something this serious on a football field before, let alone on a professional sports field. NFL players received long suspensions for much worse, and Garrett’s actions were borderline criminal.

The Browns-Steelers rivalry is one that’s always been filled with bad blood, but this was something else altogether.

The game included several helmet-to-helmet hits and heavy collisions, one of which came on rookie wide receiver Diontae Johnson, who was bleeding out of his year afterwards, and resulted in safety Damarious Randall’s ejection.

UPDATE: ESPN’s Adam Schefter reported that Garrett was suspended indefinitely by the National Football League. Larry Ogunjobi earned a one game suspension, and Maurkice Pouncey will be suspended three games.

It’s unclear immediately, but all three could likely appeal their suspensions.

Tale of the tape:

This story was originally published November 14, 2019.