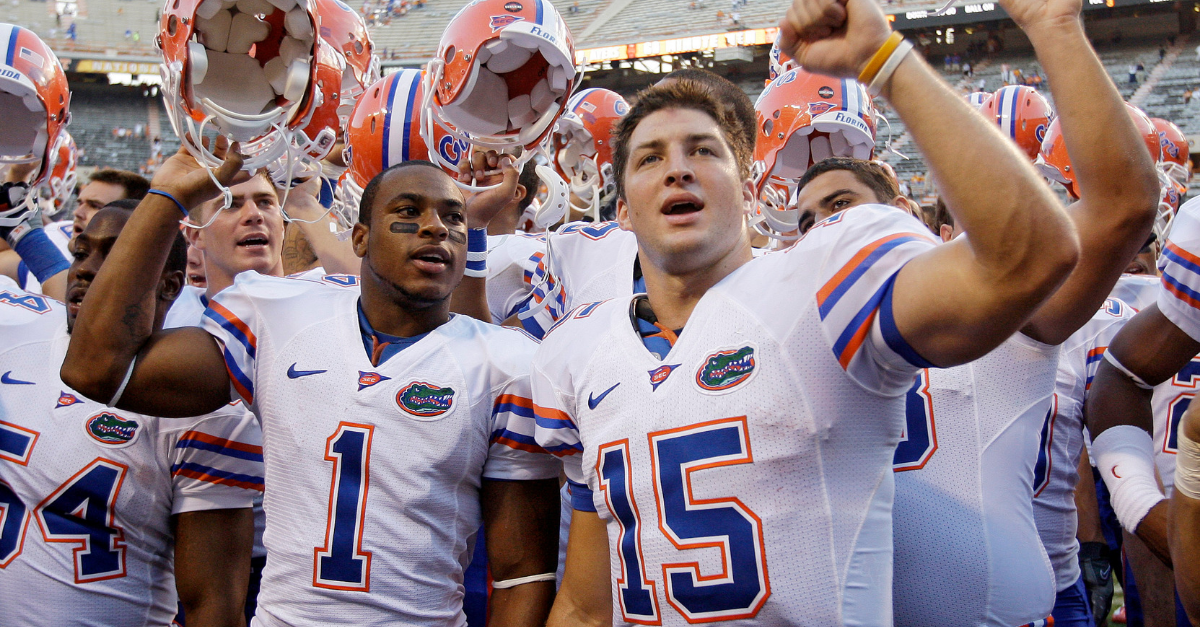 Everyone is getting paid in the NFL. Antonio Brown just finessed his way into becoming the highest-paid wide receiver. Maurkice Pouncey and Trent Brown are now some of the top-earning players at their respective offensive line positions. The Rams inked pass rushing specialist Dante Fowler for another year, too.

The whirlwind of free agency and this slew of former Gators signing new contracts got me thinking: Which of them have earned the most money over their NFL careers? I put together a list of the top 10, and their career earnings amount to almost $600 million, which sounds like enough for Billy McFarland to actually throw a successful music festival on an island in the Bahamas.

All data is via Spotrac, except in two cases (Carter and Kearse). These figures are also based only off of team contracts. See how many you can count from Florida?s 2008 National Championship team.

Cam Newton plans to celebrate his $100+ million new contract the same as a 5 year old getting chore money https://t.co/oum2OyIm7u

Before he became Super Cam at Auburn, Newton was a Gator. He transferred after being tied up with the law in a stolen laptop incident. Eight years later in the league with the Carolina Panthers, he ranks 16th among active players in career earnings.

We have signed CB Joe Haden to a three-year contract.

Only two cornerbacks in history have earned more than Haden has: Darrelle Revis and Champ Bailey. That’s pretty good company for someone who was once considered by many as the league?s top cornerback when he was with the Browns. That, and the fact that he?s lasted nine years in the NFL are why.

Florida's 424 rushing yards are their most in a single game since 1989, when Emmitt Smith was the running back. pic.twitter.com/ALszzj6NAd

It?s weird that the NFL?s all-time record holder for rushing yards and rushing touchdowns didn?t make more, but he played during the 1990?s and early 2000?s. Had he began his career 20 years later, this Gator legend probably would?ve taken home double that amount.

https://t.co/KpeqK4A9vM catches up with Carlos Dunlap, fresh off of signing his 3-year contract extension.

"It's just a blessing being able to it here in Cincinnati, and with Geno. We both started this thing together." #SeizeTheDEY pic.twitter.com/rZhL7S0F2b

Dunlap has averaged 14 games per season and recorded 72.5 sacks over his nine year with the Cincinnati Bengals, and he?s been handsomely paid for that. The Bengals just gave him a three-year, $45 million contract extension last August, so expect him to rise on this list as those checks clear.

#Steelers and C Maurkice Pouncey have agreed to a three-year contract that will pay him an average salary of $11 million per year.

Pouncey is now the highest-paid center in the NFL. pic.twitter.com/rRvFt4hesO

The Pouncey brothers were a pivotal part of Florida?s 2008 National Championship team. They have been two of the best interior offensive linemen over the last decade. Maurkice, who has spent his entire career with the Steelers, has the edge on this list.

The defensive end played for Steve Spurrier?s Gators in the 1990?s and was the sixth overall pick in 1995. Carter spent 14 years with four different NFL organizations and, amazingly, never missed a game over that time.

We have signed Mike Pouncey to a contract extension through the 2020 season. #StrongerTogether pic.twitter.com/m54q7ccH7j

Mike may be the older brother (by one minute), but he?s made about $9 million less. Still, their parents have got to be pretty proud about the combined $100 million between them.

The three-time pro-bowler was nicknamed ?the freak? for his 4.43 speed and crazy measurements. The 1999 first-rounder put up some monster years with the Titans and played 11 years in the league.

Is Janoris Jenkins actually outplaying his $52M contract with the Giants? https://t.co/U6mYRTsjtw pic.twitter.com/qfsAYSsvKp

Jenkins is another member of that 2008 legendary Florida team. He was kicked off the team after a marijuana possession charge in 2011 and finished up at North Alabama. The 30-year-old has spent seven years in the league now.

One of the most dynamic receivers in Florida history, Harvin?s NFL career was filled with injuries and what-ifs. Despite never recording 1,000 receiving yards or more than six receiving touchdowns in any season, he had five kick return touchdowns and was a pro-bowler as a rookie in Minnesota.