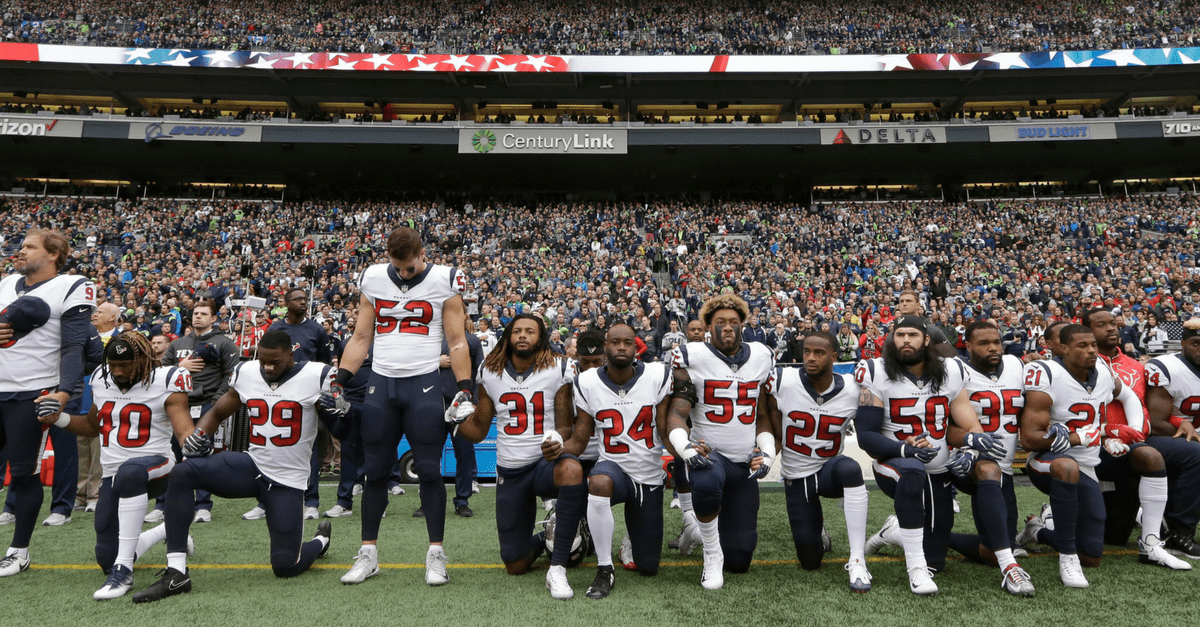 When the NFL reached a decision in May regarding the anthem protests of the 2017-2018 season, the mixed reviews didn’t bode well for the organization. Now, the NFL Players Association is speaking out against the policy.

Commissioner Roger Goodell announced in late May that the league would permit players to stay in the locker room during “The Star-Spangled Banner”, but required them to stand if they came to the field during the anthem. The players’ union, the NFL Players Association, raised skepticism over the infringement of rights in this new policy and now, almost two months later, the NFLPA released a statement on July 10 regarding the new policy.

Our union filed its non-injury grievance today on behalf of all players challenging the NFL?s recently imposed anthem policy. The union?s claim is that this new policy, imposed by the NFL?s governing body without consultation with the NFLPA, is inconsistent with the collective bargaining agreement and infringes on player rights.

In advance of our filing today, we proposed to the NFL to begin confidential discussions with the NFLPA Executive Committee to find a solution to this issue instead of immediately proceeding with litigation. The NFL has agreed to proceed with those discussions and we look forward to starting them soon.

Let’s throw it back to the beginning. Colin Kaepernick, then quarterback for the San Francisco 49ers, protested social injustice and racial inequality in 2016 by kneeling during the national anthem. The act of protest picked up steam and soon, players — then entire teams — were speaking out alongside Kaepernick. Raiders tight end Jared Cook spoke with the Associated Press about the NFL’s ruling in May, saying,

“All I have to say is, I just think it’s sad that it’s veered from something that stood for good and the whole narrative has changed into something that’s negative when that was not what it was initially about in the first place.”

The hot political climate got even hotter when President Donald Trump got involved in a Huntsville, Alabama speech in 2017. He stated, “Wouldn’t you love to see some of these NFL owners say, ‘Get that son of a bitch off the field right now, he’s fired. He’s fired!'”

For over a year, the controversy surrounding anthem protests and the NFL has created a divisive environment for players, team owners, and fans. Business Insider reported at the beginning of the year that “the average audience for a 2017 regular season NFL game was 14.9 million, down from 9.7 percent from 16.5 million in 2016.”

While that drop may seem insignificant, it’s also worth noting that NFL games still brought in the most viewership overall, and 33 of the top 50 programs watched during the year were NFL games.

This drop isn’t just because of anthem protests, though it certainly didn’t help. Business Insider also reported that over 1 million customers dropped cable in the first three quarters of 2017, meaning that as more folks switch to streaming and digital media services, all cable television is taking a hit, too.

How do you feel about the new anthem policy? Is the NFL actually infringing on players’ rights, or do you feel that this is about much more than football? The National Football League Players Association believes this ruling is both, and it will be interesting to see if the new rule has any amendments.

The mood on professional football players seems to grow grimmer each day with news breaking of the Buffalo Bills’ LeSean McCoy’s alleged assault of his ex-girlfriend and former Seattle Seahawks player Brandon Browner recently being charged with attempted murder after trying to smother his ex-girlfriend. Whatever the resolution, it’s clear that American social activism in the NFL isn’t going away anytime soon.

Read More: The 1 Question Everyone Is Asking About Each AFC Team