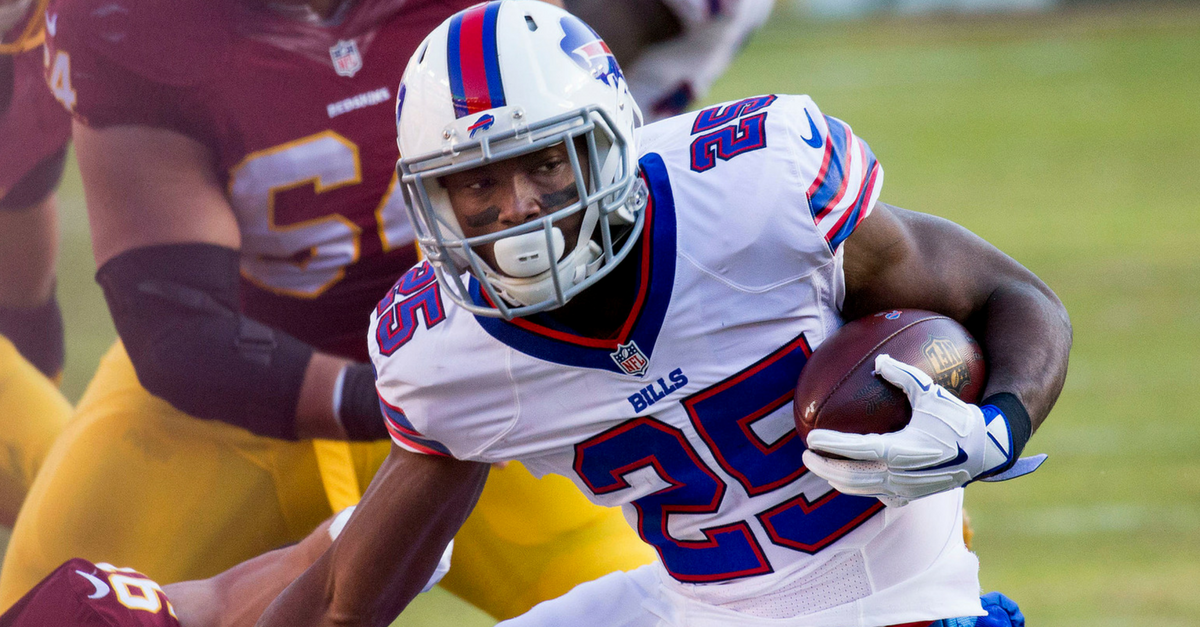 A bombshell Instagram post on Tuesday morning aimed several serious claims at Buffalo Bills running back LeSean McCoy. The graphic image showed the swollen face of an adult female victim, and accused McCoy of assaulting a former girlfriend and his son, beating his dog into kidney failure, and using performance enhancing drugs.

The Pro Bowl running back publicly, and quickly, refuted all of the claims against him.

According to ESPN Bills reporter Mike Rodak, McCoy contends that he had not been in direct contact with his estranged ex-girlfriend, Delicia Cordon, for months; the Bills running back has spent the offseason training in Miami.

After Cordon’s lawyer released a statement Tuesday though, McCoy’s alibi is headed for even murkier waters.

Cordon’s attorneys said in the statement that Cordon was attacked by an unknown assailant while she was sleeping. The intruder demanded specific items of jewelry during the home invasion, which McCoy had previously purchased for her. According to the statement, McCoy demanded the jewelry back from Cordon, saying that she could be robbed because it was expensive.

To add fuel to the fire, McCoy has been attempting to have Cordon evicted from that home since last July. Cordon had been living in the house outside of Atlanta in Milton, Georgia. There was no signs of forced entry into the home, according to the statement.

If that wasn’t enough, Ms. Cordon’s lawyers continued to add speculation to the NFL player’s alleged estrangement from the situation.

The attorney’s statement referenced a June 1 practice at Bills’ OTAs, where McCoy instructed a group of “his friends, families, and laborers” to remove furniture from the Milton home. McCoy is also accused of changing the home’s security systems without Cordon’s knowledge.

Milton police’s preliminary investigation confirmed that the crime was not a random incident, and the lone intruder targeted Cordon’s home and specific items inside.

McCoy has hired a lawyer to defend him, as the case against him continues to get uglier on the surface.

BREAKING: LeSean McCoy has now retained prominent Atlanta defense attorney, Don Samuel. Samuel tells me he's getting up to speed on the case, will be speaking to #Milton Police, ex-girlfriend's attorney today. pic.twitter.com/5kexdASaye

The National Football League and Buffalo Bills said they are reviewing the situation and gathering information surrounding the events at the Georgia home.

Social media has grasped onto these accusations, and Shady faces a long, legal battle. There’s a lot of speculation surrounding this situation, but one thing can definitely be inferred: if McCoy knew, and was directly involved in this incident, the Pittsburgh alum and former Philadelphia Eagles star has likely played his last down in the NFL.