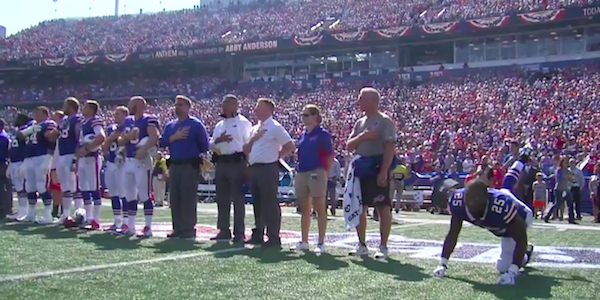 Buffalo Bills running back LeSean McCoy was candid in his criticism of President Donald Trump’s recent comments regarding the protests of social injustice by NFL players.

It's really sad man … our president is a asshole

Naturally, McCoy was one of many players that participated in the league-wide national anthem protests during Week 3.

The Pro Bowler was captured on video stretching during the national anthem prior to the Bills’ game against the Denver Broncos, as his own personal form of protest.

LeSean McCoy stretched throughout the national anthem, walked to the sideline as singer held the last note #NFL #bills pic.twitter.com/i5XpuZKwj6

LeSean McCoy continued to warm up during the national anthem – https://t.co/T7pG3VogPd pic.twitter.com/footAl0qGU

The President doubled down on Saturday amid another battle he waged with former NBA MVP Stephen Curry of the Golden State Warriors, claiming he withdrew his invitation to visit the White House, which Curry and the team have stated they have no interest in previously.