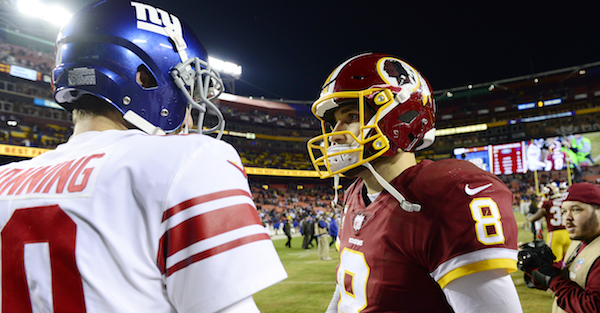 The Washington Redskins have made a decision on their quarterback for the next few years, and it doesn’t include Kirk Cousins.

Washington traded for Kansas City Chiefs quarterback Alex Smith, and they are extending Smith’s contract. He will have a four-year, $94 million deal with the Redskins.

The move means Kirk Cousins will be a free agent, and according to CBS Sports reporter Jason La Canfora, there will be a high demand for Cousins.

It’s rare to see a quality starter at quarterback hit free agency, so it’s reasonable to assume several QB-needy teams will go after Cousins this offseason. La Canfora said the New York Jets will be tough to beat in the Cousins sweepstakes.

With Alex Smith headed to the Skins, Kirk Cousins is is line for a $120M payday. Might be hard for anyone to out-maneuver the Jets for him

Kirk Cousins, the only QB ever to receive the franchise tag twice, now will leave Washington. Teams expected to be in QB market include Buffalo, Cleveland, Denver, NY Jets, amongst others.

The Denver Broncos could also be in the mix for Cousins. Teams such as the Cleveland Browns, Buffalo Bills and Jacksonville Jaguars could also factor into the equation, as well as the Arizona Cardinals.

The Jets need a quarterback, and unless they plan to draft one, Cousins could be the best option.

Washington’s decision to move on for Cousins in favor of Alex Smith surprised many analysts around the league ? especially since Smith is 33. But they couldn’t agree to a long term deal with Cousins, so they will hope Smith can win the franchise’s first playoff game since 2005.