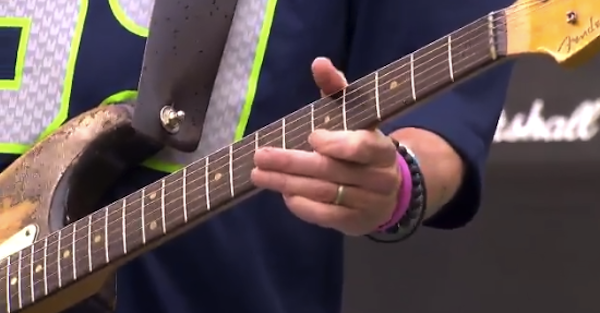 The Seattle Seahawks did not perform particularly well on Sunday but the team was able to pick up a close-fought victory over a division rival in the San Francisco 49ers. Prior to kick-off, though, there were some fireworks with regard to the national anthem and they came from Pearl Jam guitarist Mike McCready.

McCready was on for the national anthem and, while he played The Star-Spangled Banner to musical perfection, it was his unique message at the conclusion that had some buzzing.

As you can see, McCready flipped his guitar over near the end to reveal the No. 72 and that is an apparent tribute and show of support to Seahawks defensive lineman Michael Bennett. Bennett has engaged in national anthem protests and he has been joined by Thomas Rawls, Frank Clark, Cliff Avril and Justin Britt in his actions.

McCready did not vocalize his motivation around the supportive of display but it seems reasonable to assume that he is attempting to stand alongside Bennett in affirming the All-Pro’s ability to stand for what he believes in. This may not be a national news item in the way that some protests have been, but in Seattle it was certainly a noteworthy event and a crossover between sports and pop culture.