Issue between Ben Roethlisberger, OC has reportedly devolved into an ugly situation 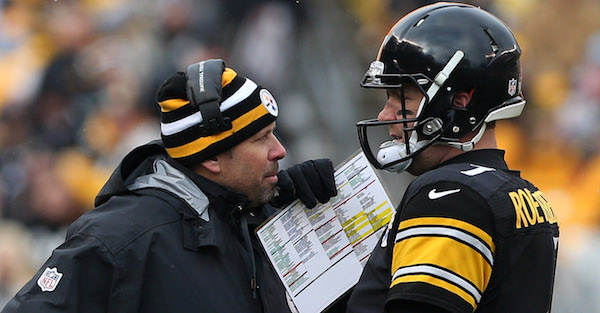 Pittsburgh Steelers quarterback Ben Roethlisberger and offensive coordinator Todd Haley have never exactly been on good terms, but their relationship has reportedly worsened in recent weeks.

CBS Sports writer Jason La Canfora reported that Big Ben asked head coach Mike Tomlin for another coach to step in as a buffer between Roethlisberger and Haley.

“Sources said Roethlisberger approached head coach Mike Tomlin about a month ago and requested to have a buffer between him and Haley on the sidelines, another set of eyes and a sounding board he could turn to,” La Canfora wrote. “Specifically, he asked that quarterbacks coach Randy Fichtner, who he is close with, no longer stay in the coaching booth in the press box during games but instead join other offensive coaches down to the sidelines.

“Tomlin quickly obliged, and the Steelers have been operating in that fashion since last month, sources said.”

Roethlisberger threw Haley under the bus after Pittsburgh lost to the New England Patriots. Roethlisberger said he wanted to spike the ball, but he told reporters that the sideline wanted him to run a play. He threw a quick slant to Eli Rogers that was intercepted, which resulted in a Steelers loss.

“It wasn’t a fake spike,” Roethlisberger said via CBS Sports. “I was yelling ‘clock it’ because I felt like that was the thing to do, was clock it and get yourself one play. And it came from the sideline, ‘Don’t clock it. Don’t clock it.’ Well, at that time, everyone thinks it’s clocked so you don’t have any time to get everyone lined up.”

Haley has been the offensive coordinator for the Steelers since 2012. The situation between the two is worth monitoring as Pittsburgh heads into the postseason. They should be among the favorites to win the Super Bowl based on talent, but if there’s tension between the franchise quarterback and the play caller, it could lead to a disastrous postseason.