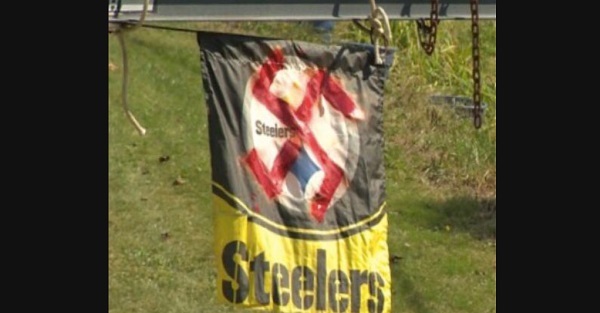 One community in Pennsylvania was in uproar this week after one man’s response to the Pittsburgh Steelers’ protest went to far.

Anton Uhl, a resident of West Deer, Pa., caused the commotion when he displayed a Steelers flag with a Swastika painted over it in response to the Steelers declining to take the field for the national anthem last week in a form of protest against racial injustice and U.S. President Donald Trump.

Uhl, who told WPXI in Pennsylvania that he is an Army veteran, released this statement after eventually taking down the flag.

?I want to tell your viewers that I was wrong in placing a Swastika on the Steeler?s Flag. The Flag has been removed. I?m not apologizing but should not have singled out just the Steelers. The Swastika, a symbol of Hate, should be worn by all the NFL players who do not stand for our Nation?s Flag and Anthem. If the players and owners want to demonstrate against President Trump and the disparity against races, then they should unite in uniform and march on Washington.?

The Steelers, like many in the NFL last weekend, protested specifically after President Trump called out the league, saying that those who demonstrated during the anthem should be fired. In addition to the Steelers not even coming out to the anthem, several players kneeled while other teams locked arms in a show of unity.

Army veteran Alejandro Villanueva was the only member of the Pittsburgh Steelers to stand during last week’s anthem.