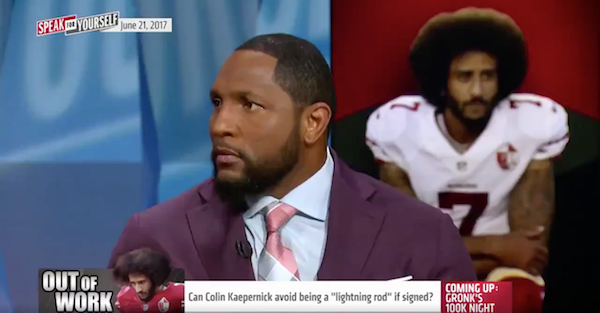 Ray Lewis wasted no time during his official FOX Sports debut in calling out Colin Kaepernick.

Lewis appeared on Speak For Yourself with Colin Cowherd, Jason Whitlock, and former NFL player Eric Davis, and he had an important message for Kaepernick, who is still without a job in the NFL.

“(Kaepernick) has to make up his mind,” Lewis said. “Do you want to play football, or do you want to be an activist?”

FEARLESS:
“Kaepernick has to make up his mind. Do you want to play football or do you want to be an activist.” — @RayLewis pic.twitter.com/7vmhfzm6EF

Related: NFL analyst calls it ?downright vindictive? that Colin Kaepernick hasn?t been signed by a team

Lewis also said he understands where Kaepernick is coming from by fighting injustice, but he said there are better ways to accomplish his goal. He said Kaepernick needs to simply focus on winning football games.

“I’m in the neighborhoods every day,” Lewis said. “I’m having conversations to try to change these things. I know there’s injustice. I know the wrong things that have been happening to black kids. I see it every day of my life. I lived it… And I’m telling you, that’s not his fight right now.

“Your fight, as Colin Kaepernick, is to use this window of opportunity that you have in the National Football League and respect what that brand means.”

Those are strong words from Lewis, and he and Davis both believe Kaepernick should focus more on football. Instead of kneeling for the national anthem and speaking out, they recommended supporting causes financially.

It remains to be seen if Kaepernick lands a job, and the wait could continue into the 2017 season.