When talking about Pro Football Hall of Fame middle linebacker Ray Lewis, there is always one "but."

He was great, but there also was the murder case. There is a huge misunderstanding by the general public about one of the most controversial cases in American sports history involving the former Baltimore Ravens superstar.

So, what happened and what was the aftermath?

RELATED: Ray Lewis Has 6 Kids But Has Never Been Married

In the early morning of January 31, 2000, Ray Lewis and a group of friends, including Reginald Oakley and Joseph Sweeting, attended a Super Bowl party at the Buckhead Village's Cobalt Lounge in Atlanta, Georgia, after Super Bowl XXXIV between the Tennessee Titans and St. Louis Rams.

While leaving the party, Lewis' group got into an argument with another group. Oakley and Sweeting led a brawl against a group including Jacinth Baker and Richard Lollar while Lewis stayed by his rented limo.

The altercation, apparently beginning with a champagne bottle over the head, eventually led to the stabbing and death of Baker and Lollar. Lewis, while in the limo and speeding away from the crime scene, allegedly told those with him to keep quiet about what had taken place.

Lewis was arrested for the double-murder and spent time in jail before the trial despite never killing anyone.

A few weeks into the murder trial, Lewis and his attorneys agreed to a plea deal that dropped his murder charges to obstruction of justice, a misdemeanor. For this deal, he gave a testimony against the two men who had done the stabbings and was used as the star witness in the case. But the jury decided there wasn't enough evidence to prove it was murder and came back with an innocent verdict on self-defense.

Lewis was the only one to serve any time in jail for the event.

Did Ray Lewis Kill Someone?

So there is an agreement that Lewis didn't do any actual killing, but it wasn't that easy to just let him off. For one, the white suit he was wearing throughout the night was never found. A white suit possibly covered in blood would probably be tough to hide and was likely immediately ditched in a dumpster somewhere in Atlanta.

And though Oakley and Sweeting were eventually acquitted of the charges, if they would have been partially on the hook for the charges, Lewis could've been as well without ever even touching a knife. As an accomplice to murder, he would be held just as important to the crime as those doing the actual stabbing.

It has always been questioned how much Lewis actually knew about the whole case and if he was withholding information that would have led to justice for the victims' families instead of everyone walking and no arrests of anyone else. He has been adamant throughout the years that he played no role in the crime, but it is hard to believe since he had blood inside his limo and told everyone not to talk about what had happened.

All we can say he is really guilty of is running with a rough crowd as a young man rising to become an NFL superstar. He was still young, just finishing his fourth season as a pro football player out of the University of Miami with a rough upbringing growing up in Lakeland, Florida. 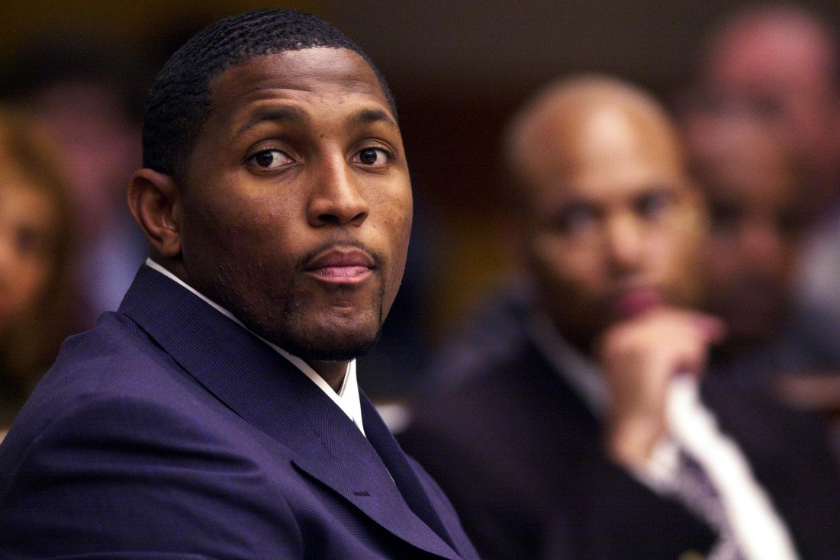 Lewis came to an out-of court agreement with the daughter of Richard Lollar, India Lollar, a 4-year-old who was born just a few months after the death of her father. Lewis and the family of Jacinth Baker also came to an undisclosed settlement.

The year after the slayings, the Baltimore Ravens reached and won Super Bowl XXXV with Lewis winning Super Bowl MVP, but unlike any other year when the MVP tells the world he will be going to Disney World, it was quarterback Trent Dilfer who received that honor.

The 13-time Pro Bowl selection and two-time Defensive Player of the Year published his autobiography titled "I Feel Like Going On" in 2015, which was co-authored by Daniel Paisner.

Though I can understand bringing it up, saying Lewis is a murderer, which I see and hear quite often, is just wrong in the eyes of the law. Not only was he not even a part of the fight that led to two stabbing deaths, the men who were served less time in jail than he did. Saying they are murderers is different since they did kill people, but the Hall of Famer and 10-time All-Pro played a much smaller role in this terrible situation than most people realize.

Ray Lewis continues to be one of the prominent football analysts alongside others for ESPN, CBS, Fox and NFL Network, but his legacy will always be haunted by his past troubles.