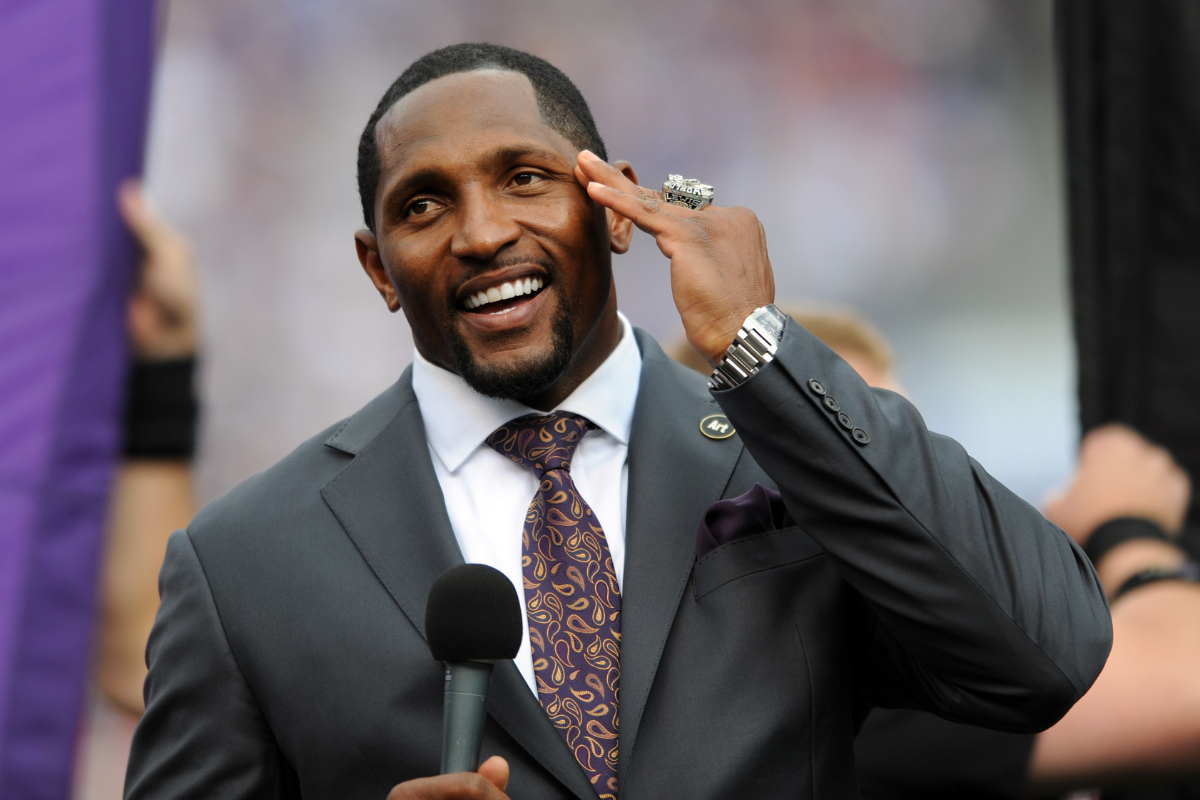 His penchant for destruction turned a monstrous net worth in the NFL. The former hard-hitting football linebacker was known for knocking the wind out of his victims, leaving them heaving in the dirt. He is the American Alpha-Male personified and packaged alongside a cute little squirrel dance.

Despite being 46, however, Ray Lewis has never been married. The former linebacker has six children with four different women, but he never married any of the women.

Lewis’s stepfather was abusive towards Ray’s mother, Sunseria. Ray Lewis, the eldest of five, became the man of the house to protect his mother. He had to be an adult from a young age, showing his little brother Keon Lattimore how to stand up for their family.

Lewis played linebacker for two years with the University of Miami. He helped establish the Miami Hurricanes football team’s reputation for vicious tackles, leading the Canes to an 27-8 record during his three seasons. Lewis made two NCAA All-American teams before jumping to the National Football League.

The Baltimore Ravens selected Ray Lewis with the 26th overall pick of the first round of the 1996 NFL Draft. The middle linebacker played all 21 seasons of his NFL career with the Ravens, attending four AFC Championships along the way. Aside from being a Super Bowl XXXV MVP and Super Bowl XLVII champion, Ravens linebacker Ray Lewis made 13 Pro Bowls, seven All-Pro teams, the USA Today All-Rookie team and won two Defensive Player of the Year Awards.

Just a little more than half dozen minutes left and this happened. [via CBS/NFL] pic.twitter.com/l8Rt6fUD90

Lewis’s career has not been without controversy. In 2000, Lewis was involved in an Atlanta nightclub incident that resulted in the deaths of two men (Richard Lollar and Jacinth Baker) by stabbing. Circumstantial evidence appeared to point Lewis’s way, but the double-murder charges didn’t stick. He pleaded guilty to obstruction of justice, which was a misdemeanor. Though he avoided jail time, the Lewis legacy took a hit.

The year after Lewis retired in Baltimore, New England Patriots wide receiver Wes Welker’s wife Anna Burns lashed out at Lewis on social media. Really, all she did was summarize his Wikipedia page, much more succinctly than I have here. She later apologized. Nobody is sure for what.

Lewis’s Ray Lewis 52 Foundation does charitable work in the Baltimore area. It’s a noble initiative. However, the Lewis name was drug through the mud again in 2016. Ray Lewis III, Lewis’s oldest son, was indicted on sexual conduct charges in South Carolina. The legal system has since cleared his name.

RELATED: Ray Lewis? Net Worth: How Rich is the NFL Legend Today?

Ray Lewis has six children with four different women. The former NFL player has never been married, preferring to keep his personal life open to change. Having six kids spread across the country is no easy task. But Lewis works hard to be a father to all.

Some of his kids are athletes, while others we don’t know too much about. Here’s a breakdown of the Lewis clan, oldest to youngest:

Ray Lewis III was born in 1995 to mother Tatyana McCall. He is perhaps the best known of Lewis’s children. The footballer played defensive back at Miami, then at Coastal Carolina University before transferring to Virginia Union University. A CCU student accused Lewis III of sexual assault. His mom called foul on the accusations, which Lewis was later cleared of.

Also born to McCall but in 1998, Rayshad was first-team All-Florida in high school. His college football journey took him from Utah State to the University of Maryland Terrapins to the Kentucky Wildcats in 2020. Rayshad Lewis is now pursuing a music career under the name Young Shad.

Ray Lewis had a daughter, Diaymon Desiree Lewis, with Towana Denise Poe in 1998. Diaymon “Dyme” Lewis competed in track and field at the University of Alabama. She presented her father at the 2018 NFL Hall of Fame induction ceremony. According to her LinkedIn, she’s an academic advisor at Georgia State University.

Rahsaan was the third child Ray Lewis had with Tatyana McCall. He followed a similar NCAA football path to his older brother, Rayshad. Rahsaan was a high school basketball stand-out but chose to get into the family football business. He played at UCF and FAU before winding up in Kentucky with his brother in 2020.

Ray had Ralin Lewis with Sharnika Kelly in 2001. Kelly is virtually unknown beyond her involvement with Lewis. Her son Ralin Lewis played cornerback and safety for Wootton High School in Rockville, Maryland, until he graduated in 2019.

According to Hollywood Life, Ray Lewis also has a daughter named Rayvyn Lewis (I wonder where he got the name from?). Ray Lewis also treats Ralin Lewis’s half-sister Kaitlin Lewis as one of his own, but she is not his biological daughter.

Back in 2000, Lewis came under fire when his pregnant girlfriend Kimberly Arnold told Baltimore police that Lewis physically attacked her, though she never pressed charges.

Ray Lewis is a man who has done it all. The Hall of Famer’s won Super Bowls and fathered children while he has also certainly had his fair share of controversy.

Ray Lewis, as far as the Internet can tell, is single today. He’s never walked down the aisle, not even with his mother of three, Tatyana McCall. The only woman who’s a constant in Ray’s life is his mother, Sunseria.