Skip Bayless weighs in on “white people” and Colin Kaepernick 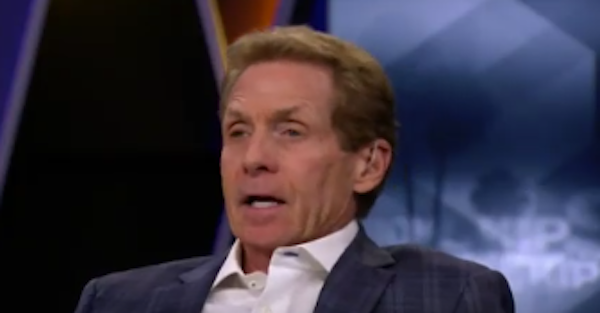 Skip Bayless is the Godfather of hot takes in sports media, and he sure didn’t shy away from his designation when recently discussing Colin Kaepernick and his inability to be picked up by an NFL team.

When recently discussing the former 49ers quarterback with his FS1 show partner, Shannon Sharpe, Bayless went way past sports in his take on why Kaepernick still doesn’t have a home in the league. He brought up race, specifically saying that white people know Kaepernick is right in his stance, though they may not be admitting it.

"Most white people deep down know [Kap] is right…They know Colin Kaepernick stood for something he should have stood for." —@RealSkipBayless pic.twitter.com/6DoQXRIATA

“In the end, they can’t get past that he disrespected the flag. I’m playing armchair shrink here, but I think most people, we can say most white people, deep down they know he’s right. Deep down, they know Colin Kaepernick stood for something he should have stood for. And that he had national impact that needed to be had in that moment. He created dialogue. He opened up eyes and ears to a growing conflict between white policemen and unarmed black men and women that needed to be addressed. And I would like to believe, I can’t prove this, that it has positive impact. That it made a lot of police forces more aware of internal issues.”

Bayless is, of course, assuming that only white people have a problem with disrespecting the national anthem, which is patently false. He’s painting with a broad brush, as he tends to do, and with that, he’s basically insinuating that 1) All white people can’t admit there are issues with police brutality in 2017 and 2) that all non-white people don’t care about respecting tradition and honoring the country as well as its service men and women.

Of course, much of the reason behind Kaepernick’s long free agency has been his stance against the National Anthem in 2016 and all the outrage it has caused. Many feel that Kaepernick disrespected the flag, the country, and even the troops in the United State’s armed services. On the other-side of the coin, there have also been many who believe Kaepernick was taking a brave stance, standing up for minorities and shedding a light on police brutality.

Kaepernick has obviously been a hot topic issue. He’s transcended sports and has become a social and political talking point — which leads us back to Bayless.

For what it’s worth, Bayless has been vocal about this in the past, so much so that he attacked a former ESPN colleague for having an “ex-white quarterback mentality”. Bayless obviously feels passionate about this issue and he’s clearly in agreement with Kaepernick socially. Here’s the thing: there’s nothing wrong with that. Just like there’s nothing wrong with disagreeing with the way Kaepernick has chosen to protest.

With the country as divided as it is, it’s worth keeping in mind that there doesn’t have to be a “good team” and a “bad team”, even in this heated discussion and debate.

Unfortunately, Bayless’ words on the matter won’t help heal that divide. In fact, they could make it worse.