You know how Buffalo Wild Wings has the overtime button? I'm convinced Roger Goodell has a "F**k the (insert team here)" button for all 32 NFL franchises. I envision a set up where Roger is chowing down on some wings in front of a board straight out of "Star Trek."

Terry McLaurin looks at the ref asking if he?s good - ref points back at McLaurin as of to indicate he?s good. McLaurin then gives a thumbs up to ref to acknowledge it. This ?penalty? took a Brian Robinson TD off the board. Via @SNFonNBC pic.twitter.com/B86N6nsJsS

RELATED: The New England Patriots' Last-Minute Meltdown Is a New Low for the Franchise

One minute left in the fourth quarter. Washington needed a touchdown and two-point conversion to send the game to overtime. Quarterback Taylor Heinicke scrambled to set up the Commanders with a 3rd-and-goal from the 1-yard line.

As the Commanders line up, wide receiver Terry McLaurin asks the line judge if he's set up correctly. The line judge points. McLaurin moves up a half-step. Running back Brian Robinson then trudges his way into end zone for the crucial score.

Wait. There's some laundry on the field. McLaurin was flagged for illegal formation. Take away the touchdown and move the ball five yards back. Huh?

And it only got worse. Two plays later, facing fourth-and-goal from the 6-yard line with the game hanging in the balance, Heinicke tried to find Curtis Samuel in the end zone. Samuel, however, was on the receiving end of a hug from Giants cornerback Darnay Holmes. Only this time, there were no flags to be found.

THIS IS PASS INTERFERENCE pic.twitter.com/2G34aqzHFk

The Giants took over on downs and kneeled it out for the 20-12 win, putting them in a manageable position to make the playoffs. On the other hand, the Commanders were flabbergasted by the officiating. McLaurin went on to confirm the official told him he was good in a post-game interview.

Listen to Terry McLaurin explain that he heard the official tell him he was good, then the official threw a flagged for illegal formation. @wusa9 #HTTC pic.twitter.com/Rsvl6Cmcrh

Man, you can see the disappointment on his face. Heinicke had a stronger reaction than his top target.

"He gives the thumbs-up to Terry, what the f-- is that?" the Washington signal caller said. Although, he more said this to himself than as an official soundbite. Commanders head coach Ron Rivera, who was furious, avoided officiating questions altogether in his post-game interview.

#Commanders HC Ron Rivera asked about the officiating tonight ?Don?t ask me about the refereeing because I can't answer the question."pic.twitter.com/gvc9GXmgHN

This wouldn't be a fair argument without hearing from both sides, though. Referee John Hussey told Nicki Jhabvala, an NFL pool reporter for The Washington Post, that officials aren't obligated to tell players if they're lined up correctly.

"The official could be doing other things, like counting the offense -- there's a multitude of different duties. So, I can't confirm if the official even saw that or not, but he was clearly off the line of scrimmage."

The official ruling is that a receiver is legally on the line of scrimmage if he breaks the waist line of the center. This is why you see receivers check in with officials before plays all the time. It's a common courtesy. But if a receiver checks in while still looking at the ball or doesn't make the correct adjustment, the ref has the right to throw the flag.

Let's take a closer look, though.

If you look closely, the following exchange happened:

- Ref points and tells McLaurin to move up

- McLaurin acknowledges, moves up a little, and does a final check

- Ref responds with one word and then starts moving his hand to his flag, pulling immediately on hike

The all-22 views on the illegal formation penalty against Terry McLaurin and non-PI call on the last throw to Curtis Samuel ... pic.twitter.com/nGgYpU8Eym

The whole thing looks like a miscommunication. McLaurin checks in, the ref points, McLaurin adjusts, the ball is snapped and the flag is thrown. From the all-22 angle, McLaurin looks to be in the right position.

The controversy surrounding this play is probably why the refs kept their flags in their pockets on the pass to Samuels. Officials are human, too. They can read the room.

Still, we hear "let the players decide the game" ad nauseam. A ref decided the outcome of the Commanders/Giants game over a sequence that happens all the time. In turn, it caused the no-call on Samuels. 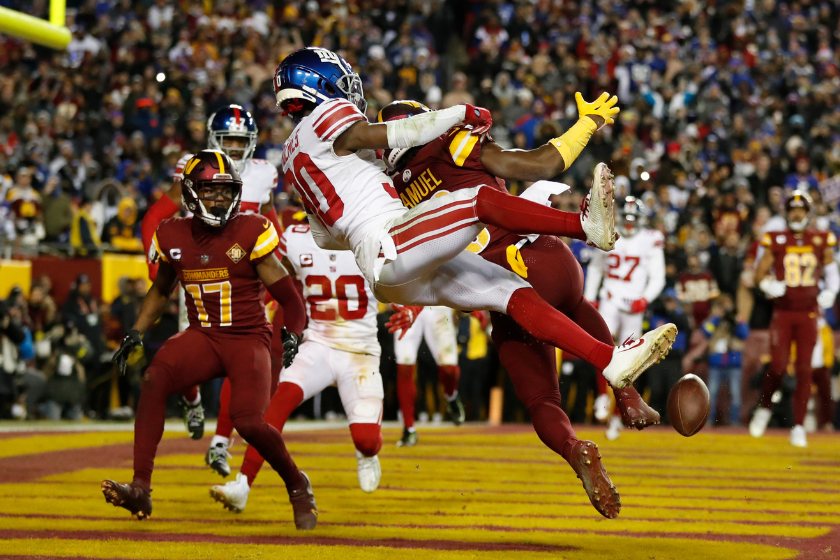 The loss made Washington's path to the postseason more difficult while it secured at least a Wild Card spot for the Dallas Cowboys. I couldn't sleep at night knowing Goodell might've tinkered with the game knowing the Cowboys, only the most valuable sports franchise on the planet, would cement a Playoff spot with a Commanders loss.

Football is a game of inches. Literally, in this case. But to me, it looks like the line judge was eager to throw the flag here. Don't tell a player to make an adjustment, confirm it, then penalize him for it. That's two-faced.